It's still very early in the New Year, but here is how things are shaping up in Genoa City. 2016 began in a very dramatic fashion with Billy knocking on death's door and Jack having to make the excruciating decision about whether to take him off life support.  Billy wasn't going to die, though, because Jason Thompson has taken over the role from Burgess Jenkins.  He's done a good job so far, I think,  His initial scenes on the show looked very promising and I noticed a bit of a glint in his eye (shades of Billy Miller). However, I'm still going to reserve judgment until I see more of him.

Kevin Fisher made a deal with the devil.  Believing that Billy was going to die, Kevin unwisely sold his Internet business idea to Victor Newman.  He will eternally regret that decision and he will rue the day he became beholden to "The Moustache."  Victor patronizes Kevin  and treats him like a child.  He even called him a smart "boy" when the deal was sealed.  That unholy deal is going to create even more animosity between Victor and Billy.  Victoria, as usual, will be caught between her daddy and Billy. She doesn't seem to realize that her father has ruined all her relationships with men.

The two biggest hypocrites on the show are Neil Winters and Victor Newman.  Victor, of course, always justifies his dirty deeds with the excuse that he has to protect his family and his business. Although he really does love his family, he loves money and power more.  Neil professes to be a decent and moral man, but he is neither. He didn''t show any restraint or self-discipline where Hilary was concerned.  He put himself at the beck and call of his former wife/daughter-law, making himself open to temptation.  Hilary was right when she stated that Neil wanted it to happen.

Neil took advantage of Hilary's vulnerability due to her brain injury.  He betrayed Devon even after Devon had forgiven him for his misdeeds.  Neil should be serving a prison sentence right now.   He's not behind bars, thanks to his son.  What a way to show his gratitude to Devon!  No wonder poor Mattie and Charlie are confused about the marital status of their Grandpa Neil, their Uncle Devon and their Grandma/Aunt Hilary.

Nikki is so starved for attention from the preoccupied Victor that she is pretending to be having an affair with Neil to make him jealous. Neil himself warned her that she is playing with fire.  This will not turn out well for Nikki or Neil.

Marisa may be a beautiful woman, but Noah Newman needs to distance himself from her as soon as possible. She has never been upfront with him and she is toxic.  As Mariah has pointed out, Marisa is a serial liar.  She was the girlfriend of a drug lord and she conveniently neglected to tell Noah that she was married and, oh yes, she had a daughter too.  Those are some pretty big sins of omission, don't you think?  Noah is so smitten with Marisa, that he wants to think the best of her.  Mariah, on the other hand, sees her more clearly.  She knows Marisa is bad news and will continually hurt her brother.

I can't for the life of me understand why the writers refuse to give Noah some backbone. Just because he's a decent guy, doesn't mean he has to behave like a spineless wimp all the time.  He's not naturally deceitful like Victor and Adam.  He wanted to go to the police and admit he was the one who hit Billy.  Yet he allowed Marisa and Victor to talk him out of it.  He wanted to do the right thing, but he just couldn't stand up to Grandpa and "girlfriend."  If he were wise, he'd leave Marisa to Luca Santori and wish them well.

Although far from perfect, Mariah is not a hypocrite.  She has a lot of character flaws, but at least she doesn't pretend to be someone she's not.  She's not sanctimonious.  It's obvious that Mariah cares deeply for Kevin, but is trying to avoid having a serious relationship with him.  She is afraid of getting hurt.  She's also jealous of Natalie, the Swiss computer geek.  Natalie, played by Mara McCaffery, made her first appearance on the show and, like Mariah, I wasn't impressed.  I find her somewhat cartoonish.

Paul Williams should know better!  What kind of a police chief is he?  I couldn't believe the way Clueless and Son just burst into Billy's hospital room to pepper him questions about the car that hit him.  Billy, of course, was in no condition to respond.  I don't blame Victoria for being upset.  It was not the finest example of police work.  Paul and Dylan could have caused Billy to have a setback.

Jared Breeze makes his debut as Max on Y&R


Young Jared Breeze has made his debut on The Young and the Restless as Son of Stitch.  He's joined the cast in the recurring role of Max Rayburn, whose father, Dr. Ben "Stitch" Rayburn (Sean Carrigan) has just wed Abby Newman (Melissa Ordway).

Jared, a native of Southern California, has appeared on Jimmy Kimmel  Live and many television commercials.  He also had a role in Cooties (2015), an independent horror comedy film.  He then played the title role in The Boy (2015), a horror film directed by Craig Macnell.

Max Rayburn's arrival in Genoa City will present many challenges and difficulties for newlyweds Stitch and Abby.  The child is confused and frightened.  His mother has just died.  He doesn't know his father that well and he has a new, young stepmother.  Abby is inexperienced with children and doesn't know how to handle a scared little boy to whom she is a stranger.

Hey, given the way characters age so quickly on daytime soaps, don't be surprised if Max and and Faith have a romance in a few years.  Remember, folks, you read it here first.


I received some comments from longtime viewer, Elba.  She wrote the following:

Please try to find out if Dr. Sandy Anderson is a relative of the young girl who was supposedly hurt in the diving accident at the Newman ranch.  These never-ending storylines (and there are dozens) really need closure.  The majority of viewers, I am sure, DO NOT want anymore absurd kidnapping, baby snatching, DNA baloney, silky sex scenes and family members marrying and divorcing each other so frequently.  We need elegance and class on Y&R, which is what the soap is really supposed to be about!  Bring back people to live at the Chancellor mansion!  This elegance has long been gone since the passing of our beloved Jeanne Cooper (Mrs. C.), but the writers can have some other classy (not nouveau riche) family move in (someone from the past maybe could be recast) and interact with the Newman and Abbott clans.  The set could probably be updated a bit, but it would certainly provide some fresh ideas rather than the boring ones we are seeing now. Just saying . . .

I still think it would be good for Sharon to return to Nick after all this mess (with the baby and Dr. Anderson) is over.  He has always been her shining knight no matter what, and they, along with Victor and Nikki, are the "it" couple on Y&R.

I wish I knew the real identity of Dr. Anderson, but only the writers know for sure.  They are keeping it a closely guarded secret.  It seems logical that the wicked therapist is a relative of the girl involved in the diving accident, perhaps her sister.  If she is the accident victim herself, why doesn't Nick recognize her?  Has she had plastic surgery and has her paralysis been miraculously cured?  I just hope that's not the case.

Yes, Elba, I wholeheartedly agree with you that some fresh storylines are needed.  We've certainly had enough of kidnappings, baby snatching, look-alikes, plastic surgery makeovers etc.  I also agree that Y&R could use some elegance and class.  I too miss Mrs Chancellor.  She was one of a kind, but she's not coming back and she can't be replaced.  The Chancellor mansion is just not the same without her.

I have thought of one way way to add elegance to the show.  Now that Top of the Tower has reopened, the writers should create a classy and intriguing new character,  The character would be a female singer, not from Genoa City, who is hired to entertain there   Why not build a storyline around her and the happenings at the restaurant?

As for Nick and Sharon, I think they will end up back together at some point.  They seem to be a popular pairing and there are many who would like to see them reunite.


Not sure about the new Billy, too soon to tell but I did a lot of fast forwarding of his out of body experience last night.  I find it very depressing.  I watch a soap opera to be entertained not to be depressed.

I think Ashley and Dr. Neville make a good match.  What do you think?

I wish they would get rid of Neil Winters.   He really gets on my nerves.

I wonder what happened to Adam and who kidnapped him??

Yes, Carly, it is too early to form any clear impression on Jason Thompson's performance in the role of Billy. Although my initial reaction was positive, I need to see more.

Yes, I also think Ashley and Dr. Neville make a good match.  I also think he's going to be a hero and save her life.

Although I'm not a great fan of Neil Winters, his character is needed for storyline purposes.  So, no, I wouldn't get rid of him. 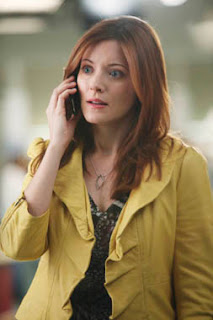 Evil Dr. Anderson, played by Elizabeth Bogush, definitely has an agenda.  The dastardly doctor is obviously out for revenge on Nick Newman.  Someone in Genoa City will discover her real identity. Whom do you think it will be?

Who will be the first to uncover Dr. Anderson's true identity?

That's all for now.  The next edition of Y&R Report will appear on TV Banter on Saturday, January 30, 2016.  I am looking forward to watching more of Jason Thompson's portrayal of Billy Abbott.  I know that Billy Miller was superb in the role, but he's on General Hospital now and will not be returning to Y&R anytime soon.