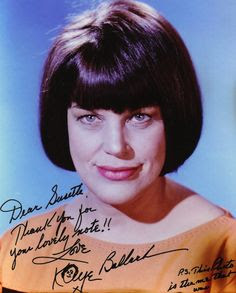 To my mother’s horror, I wanted to be in show business. This notion was contrary to every conventional belief she possessed! Mama did her best to dislodge this foreign idea from my head: “You’re too ugly. You can’t be in show business the way you look!” She’d say, “Have a cannoli.” If my mother ever felt maternal pride in any of my achievements, she never shared those feelings with me.

Kaye is a born entertainer.  In her 2014 interview with Alexis Hunter for CV Independent, she stated that she wanted to be in show business at early age.  "I knew I wanted to perform by the time I was five," she said, "and even before graduating for high school, I began to find work doing imitations of my favourite stars.  I worked all around Ohio."

A versatile, performer, she has had a long and distinguished career as an actress, comedian and singer.  Remarkably, her career has spanned well over 70 years.  During that time, she has done it all - burlesque, vaudeville, big bands, nightclubs, Broadway, movies and television.  However, she is probably best known for her role in the 1960s sitcom The Mothers-in-Law.

In 1941, the teenage Kaye performed in a USO stage production of Stage Door Canteen in her hometown of Cleveland.   Beginning in 1943, she toured with Spike Jones and his orchestra for two years as a featured vocalist and a flute/tuba player.  She then settled in New York and made her Broadway debut in 1946 in Three to Make Ready.  During the 1950s, she performed in Greenwich Village cabarets.


In 1951, Kaye made her television debut. She appeared as a regular on Henry Morgan's Great Talent Hunt, a show featuring people with offbeat talents.  The acts were interrupted by comedy skits and song.  Contrary to what you may think, it wasn't just an earlier version of The Gong Show or America's Got Talent.  According to The Complete Directory to Prime Time Network TV Shows 1946 -Present, Henry Morgan's Great Talent Hunt was actually "a satire on the Orignianl Amateur Hour-type program."

On March 31, 1957, Kaye Ballard and Alice Ghostley played the two wicked stepsisters in a live telecast of Rodgers and Hammerstein's Cinderella with a young, up-and-comer named Julie Andrews in the role of Cinderella.  From 1961 to 1963, Kaye appeared regularly on NBC's Perry Como's Kraft Music Hall as a member of the "Kraft Music Hall Players."

During the 1950s and 1960s, Kaye was a frequent guest on countless TV/variety shows, appearing with Ed Sullivan, Jack Paar, Steve Allen, Johnny Carson, Merv Griffin, Carol Burnett and more.  In 1964, she had a guest sport in an episode of The Patty Duke Show entitled "The Perfect Teenager" (Season 1, Episode 25, Air Date: March 4, 1964).  In the episode, Patty decides to take a modelling course in order to boost her self-confidence. She attends a school for would-be teenage models.and instructor, Mrs, Selby, is portrayed by Kaye.

From 1967 until 1969, Kaye played Kaye Buell on The Mother-in Law, an NBC comedy. The series was produced by Desi Arnaz and it was created by I Love Lucy writers Bob Carroll, Jr.and Madelyn Pugh Davis,  The premise of the show was this: Kaye Buell and her husband Roger (Roger C. Carmel) were next-door-neighbours to Eve and Herb Hubbard (Eve Arden and Herbert Rudley). Kaye and Roger's son, Jerry (Jerry Fogel), married Eve and Herb's daughter, Susie (Deborah Walley). Despite becoming in-laws, the parents displayed completely different temperaments.  The Buells were emotional, while the Hubbards were more reserved.  The two matriarchs, Kaye and Eve, continually meddled in their children's lives, much to the chagrin of their long-suffering husbands.

Due to low ratings, NBC wanted to cancel The Mothers-in-Law after just one season. Desi Arnaz, however, persuaded the network to give the show another chance and it returned for a second season. The cast, except for Roger C. Carmel, agreed to forgo a pay raise,  As a result of the salary dispute, Carmel was replaced by veteran actor Richard Deacon, known for his roles on Leave it to Beaver and The Dick Van Dyke Show.

Ratings for second season of Thee Mothers-in-Law failed to improve and NBC cancelled the series.  Although the show was short-lived, Kaye became typecast as a loud, Italian mother and it damaged her career.  "It's hard to get away from anything like that," she told Neil Genzlinger in a January 8, 2010 article for The New York Times.  "It's like the Fonz. Only he made a lot of money.  We didn't."

Below is a publicity photo of the two sets of parents from The Mothers-in-Law. From left: Roger C. Carmel, Herbert Rudley, Kaye Ballard and Eve Arden 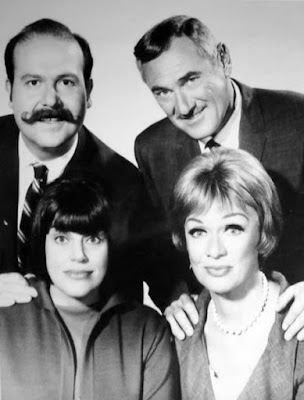 Kaye Ballard was a regular on The Doris Day Show as Angie Palucci.  The Doris Day Show ran from 1968 until 1973, but Kaye didn't join the cast until 1970.  At the beginning of the third season, Doris and her two sons moved into an apartment in San Francisco. The apartment is owned by Angie and her husband, Louie (played by Bernie Kopell), who run an Italian restaurant on the ground floor. Other cast members included Rose Marie as Doris' frined Myrna Gibbons, a secretary at the magazine where they worked and MacLean Stevenson as Michael Nicholson, the magazine's editor.   By the start of the fourth season in the fall of 1971, the entire supporting class had left the series, including Kaye.  McLean Stevenson, of course, moved on to greater stardom on M*A*S*H as Lt. Col. Henry Blake.  By the fifth and last season, the cast of The Doris Day Show hasd been reduced to just three regular characters: Doris, her new boss Cy Bennett (John Dehner) and a secretary named Jackie Paarker (Jackie Joseph).

Kaye was the  guest star on The Muppet Show.  She sang "One Note Samba" with Miss Piggy and played several musical instruments.


On March 11, 2014, at the age of 88, Kaye Ballard performed a "Going Out of Business" show for a sold-out audience at the Camelot Theatres in Palm Springs, California.  The one-night event, featuring nearly two hours of live entertainment, was billed as her possible final performance.  As Kaye put it, "I wanted to do one last show before I retired.  But the only business I know is show business, so I decided to say I was just going out of business."

* Kaye Ballard has never been married and has no children.  She is a long-time resident of Rancho Marage, Califonia, where a street is named in her honour.  It is called Kaye Ballard Lane. In the New York Times article by Neil Genzlinger, Kaye is quoted as saying, "Frank Sinatra had a street.  Dean Martin had a street.  I have a lane."

* In 1993, Kaye played the role of Mrs. Remo on the daytime soap opera All My Children.

* Desi Arnaz directed some episodes The Mothers-in Law and he also guest-starred in four episodes of the series as a bullfighter from Barcelona, Spain named Raphael Del Gado.

* Kaye is the author, along with Jim Hesselman, of a memoir titled How I Lost 10 Pounds in 53 Years: A Memoir.  It was published in 2006 by Back Stage Books and it includes a a forward by comedian Jerry Stiller.  Kaye also recorded a four-CD memoir called My Life, In My Own Words, With My Own Mouth, produced by Mastermind Studios. 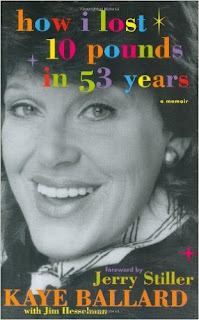 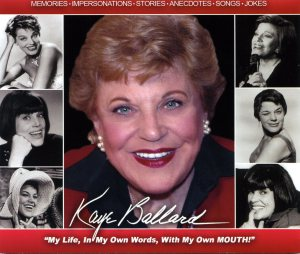 EDITOR'S UPDATE:  Kaye Ballard died at her home in Rancho Mirage, California on January 21, 2019.  According to a fiend, the the cause of her death was kidney cancer.  Kaye was 93 years old at the time of her passing.

Email ThisBlogThis!Share to TwitterShare to FacebookShare to Pinterest
Labels: t

TREVOR NOAH ("The Daily Show") was born of February 20, 1984 in Johannesburg, South Africa. Click on image for more information