From That Girl to Mary Tyler Moore


I am saddened by the death of Mary Tyler Moore.  She was one of my all-time favourite television stars.  She faced a great deal of adversity in her life and she faced it gracefully and courageously.  At the age of 33, she was diagnosed with Type 1 diabetes and became a tireless advocate for the Juvenile Diabetic Research Foundation. She fought alcoholism and underwent brain surgery to remove a benign tumour in 2011.  In 1980, she dealt with the accidental shooting death of her only child, her 24-year-old son, Richard "Richie" Meeker.

Through her character, Mary Richards, Moore has been credited with providing a voice and a face for single 30-something career women.  She inspired young women to enter the workplace.  Her WJM-TV newsroom was a second home.

It's interesting that The Mary Tyler Moor Show was set in cold, wintry Minneapolis and not New York or Los Angeles.  Foe working women of the 1970s, "Mare" was always there, feisty and gritty as ever. She was a true trail blazer and there was such a sense of joy and freedom when she tossed her hat into the air.

However, I would be remiss if I did not point out that Ann Marie, Marlo Thomas' character in That Girl, set the stage for Mary.  That Girl ran from 1966 until 1971 and Mary Tyler Moore aired from 1970 to 1977.  Despite the fact that both shows focused on single women living on their own, there were some significant differences between Ann and Mary. 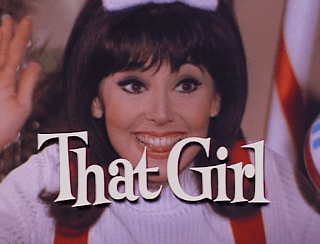 Ann Marie was an aspiring actress from the town of Brewster, New York.  She moved to New York City to launch her career.  Her jobs were sporadic and unstable.  She accepted amost any TV commericial or theatrical role that came her way.  Unlike Mary, Ann had a loyal and supportive boyfriend, magazine writer Donald Hollinger (Ted Bessell) and an overprotective father, Brewster restaurateur Lew Marie (Lew Parker).

Mary Richards, on the other hand, had a more stable career, as an Associate Producer. for WJM-TV. and was later promoted to News Producer, when her boss, Lou Grant, became the station's news director. Mary's life revolved around the newsroom and her friends.  She was, in truth, more independent than Ann Marie.  Still, Ann Marie was quite liberated compared to other female characters of her era.  She had her own apartment and she controlled her own finances.  During the fifth and final season of That Girl, Ann and Don became engaged and the series ended.  Marlo Thomas chose to end it against the wishes of ABC and the show's fans and sponsors.

In a May 16, 2006 article by Louis R. Carlozo in the Chicago Tribune, Marlo Thomas is quoted as saying,"After five years, I was a woman and we had done all the stories that could be done about a girl and her boyfriend."  "That Girl is trying." declared Thomas, "but to have her move on from that is a different show."

Thomas rejected a traditional ending for the series in which Ann and Donald get married.  "They wanted us to get married in the last show, and I said, `No, we can't do that. She's been independent and on her own and struggling against the system, and if we do that, then we're saying that's the only way to have a happy ending.'"


* The final episode of the Mary Tyler Moore Show is entitled "The Last Show." (Season 7, Episode 24).  It was the 168th episode of the series and it first aired on CBC-TV in Canada on March 18, 1977 and on March 19, 1977 on CBS.  In "The Last Show," WJM-TV's new station manager, Mr. Coleman (Vincent Gardenia) begins firing staff because he wants to to do something about the low ratings of the Six O'Clock News.  Lou, Mary, Murray and Sue Ann are fired, but  somehow pompous anchorman Ted Baxter retains his job.  To cheer Mary up, Lou arranges for her old friends Rhoda Morgenstern and Phyllis Lindstrom to visit Minneapolis.  The three friends are happily reunited.

In the final scene, everyone hugs and says goodbye.  They exit the newsroom singing "It's a Long Way to Tipperary."  Mary looks back poignantly, smiles, turns off the lights and closes the door.