June Blair: Her Life, Career and Marriage to David Nelson 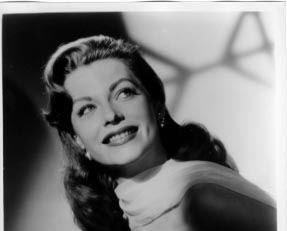 Margaret June Blair was born in San Francisco, California on October 20, 1933.  She became a model and an actress. During the 1950s, June appeared in feature films and in minor and guest-starring roles on television shows.  In 1957, she had a small part in an episode of Bachelor Father entitled "Bentley Versus the Girl Scouts"  (Season 1, Episode 2, Air Date: September 29, 1957).  She also played the role of Anita Callahan in a 1959 episode of the adventure series Hawaiian Eye entitled "Three Tickets to Lani" (Season 1, Episode 8, Air Date, November 25, 1959). She was Playboy magazine's" Playmate of the Month for its January 1957 issue.

In 1957, June became engaged to singer/actor Nino Tempo and was the inspiration for his song, "Looney over Juney."  In 1958, she broke off her engagement to Tempo and began dating Lindsay Crosby, Bing Crosby's son.  Below is a 1958 press photo of Lindsay escorting June to the Coral Casino in Santa Barbara, California, where Bing served as a commentator for a fashion show. 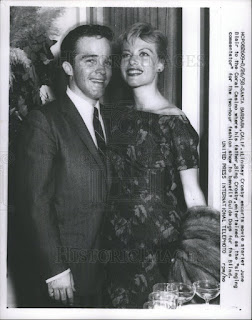 In 1959, gossip columnists began linking June to singer Bobby Darin, so much so that she felt compelled to write a public disclaimer.  In an article that appeared in the August 1960 issue of Movie Mirror magazine, June denied having a romance with Bobby.  She stated categorically that they were just good friends.  She also emphasized that they were not engaged and as far as she was concerned, not in love.  According to June, she and Bobby first met at the State Brothers Club on the Hollywood strip in early 1960.  She had gone there with Nino Tempo and Bobby was accompanied by his agent.  It's interesting to note that Darin married actress Sandra Dee on December 1, 1960.

June Blair's Movie Mirror article is online and if you would like to read it in its entirety, click on the link below.

June made guest appearances in 1960 episodes of such TV shows as Sea Hunt, M. Squad and The Chevy Mystery Show.  From 1960 to 1961, she played the role of Julie Greer in several episodes of the Western series Two Faces West.  Then came some big changes in her life.


After her marriage to David Nelson, June joined the cast of The Adventures of Ozzie and Harriet. David's real life wife became his television wife and she remained with the series until it was cancelled in 1966 (She took a one-year sabbatical after the birth of her son, Daniel in in 1962).  Her last appearance on the show was in an episode entitled "Dave's Other Office" (Season 14, Episode 24, Air Date: March 12, 1966). Two more episodes of the series were aired (March 19, 1966 and March 26) in which she did not appear.

June Blair did not continue her acting career when The Adventures of Ozzie and Harriet finished its run.  Since that time, she has lived a very private life, away from the spotlight.  June is now 83 and it is very difficult to find current information about her.  No recent photographs of her appear to be publicly available.  Sons Daniel and James have also been keeping a low profile and there is very little information about them.

* According to the fan magazines of the 1950s, June was raised in foster homes and suffered abuse in them.

* David Nelson became a successful producer.  He died of colon cancer on January 11, 2011 at the age of 74.  A television writer who interviewed David a few years before death has informed me that according to David, June initiated their divorce and that she strongly disliked the limelight.