Most soap actors don't have a great deal of job security, especially with head writers like Y&R's Mal Young.  When Mal decides to write a character out, it happens very suddenly and abruptly.  Juliet, Graham, Scott . . . . POOF . . . Gone.  The latest is Noah.  After consulting with Grandpa Victor, he's decided to work for Newman Enterprises in India.  That came as a bit of a surprise to me because I thought Noah had been getting more of a storyline lately.  I expected him to be the manager of The Top of the Tower restaurant for a while.  After all, he just started the job.

Victor thinks a lot more of daughter Victoria than son Nick.  He advised grandson Noah to be more like his Aunt Victoria than his father, Nick.  He called Nick "weak."  Speaking of Nick Newman, when he discovers the secret Chelsea is hiding about Christian's paternity, he will blow a gasket.  When he learns that Victor is involved in the deception, he is going to become even more upset.  Nick has a problem with controlling his anger and he really needs to undergo anger management therapy.

Since Melissa Claire Egan, who plays Chelsea Lawson, is leaving Y&R, the secret will soon be revealed to Nick and it is obvious that they are finished as a couple.  Nick will reunite with Sharon.  It's inevitable, although it may take a while for Nick to get over his anger and his bitter breakup with Chelsea.  Also, after being two-timed by Scott, Sharon doesn't want to rush into another relationship.  Still, Nick and Sharon are getting along much better these days and I can see them running the coffee shop together, as they did years ago.

As for Chelsea, I don't like the way she has been turned her into a con woman again.  I realize that Melissa Claire Egan is exiting the show, but the writers have provided no explanation for Chelsea's sudden reversion to her old ways.  Why would she change so abruptly without a plausible reason.  It's not logical.  Was the storyline just thrown together as a way for Melissa to leave the show?

The rivalry between two formidable businesswomen,Victoria Newman and Ashley Abbott, continues.  It now appears, however that Victoria has found a powerful ally in Jack Abbott, of all people.  She and Jack both want to achieve the same goal.  Victoria wants Ashley out of her hair at Newman Enterprises and Jack wants his sister back at Jabot.  Even though Jack is her father's arch-enemy and their two families are constantly feuding, Victoria and Jack have united for a common cause.

I don't expect Victoria and Ashley to ever work together because there would be no conflict.  I think Ashley will eventually return to Jabot.  By the way, in the last edition of Y&R Report, the readers' poll asked whether you thought Ashley or Victoria would win their power struggle.  So far, almost all of the respondents have chosen Victoria.

When I see Amelia Henle (Victoria) and Thad Luckinbill (J.T.) in their scenes together, I wonder how they could be divorced (or in the process of getting a divorce?) in real life.  Amelia seems to have a sparkle in her eye.  Either they are very good actors or they are rekindling their romance.  I also wonder how long Thad is going to stay with Y&R, because he nay want to concentrate on producing films again.  That could be why J.T. has a heart condition.  Maybe he will die tragically.  There has to be a reason why they have written his heart condition into the stroyline.  I doubt they would have just thrown that in for nothing.

I was completely turned off with Nikki and Arturo heading up to a room at the Genoa City Athletic Club (GCAC).  As if that would really happen!  I did find the Alzheimer storyline depressing.  However, I thoroughly enjoyed Marla Adam's acting. I loved her and hopefully she will be back soon.

I don't like what they are doing with Chelsea, but I know she is leaving.

I do not like Tony hooking up with Ashley.  Surely they can find someone more appropriate for her.  He is too rough around the edges, in my opinion.

Well, Carly, I have to agree with you about Nikki.  She would never be that cheap.  Now would she have ever told Ashley that she was perfectly welcome to Victor.  Perhaps Nikki is finally finished with Victor romantically (I have my doubts).  Even if that were the case, I don't think she would invite other woman to pursue him, especially Ashley.  Remember, that Victor's affair with Ashley broke up their marriage .  Remember too that she used to tell Victoria that Ashley was the "wicked witch."  Nikki and Ashley may not be at each other's throats right now, but Nikki is no fan of hers.  They will never be best buddies.

Yes, Carly, Marla Adams has played the part of Dina magnificently.  I really hope she wins a Daytime Emmy for her role.

I don't like what the writes are doing with Chelsea either.  There was not enough foreshadowing.  It came on too quickly for my liking.  It seems contrived, as if it were written to allow her to make a quick exist from Y&R.

Tony Kingman does appear to be an opportunist and he's definitely not in Michael Baldwin's good books.  However, we need to see more of him before we pass a harsh judgement on him.  We have seen his seedy side but interesting characters are never one-dimensional.  may be more complicated and he may have different sides to him.  If the writers want him to win favour with viewers, they had better have him display some redeeming qualities.  Otherwise, viewers will never connect with him and his character will not be on the show for long,.  As for Ashley, she may fall for him.  After all, he's a handsome lawyer with a lot of social status.  That impresses her. 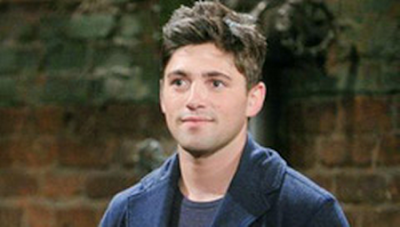 Robert Adamson, who has played the role of Noah Newman for five years, is leaving Y&R.  According to Soap Central, Adamson did not choose to leave the show.  It seems that the show has decided to dispose of his character.  So, they have sent Noah off to work for Newman Enterprises in Mumbai, India.

Greg Rikaart will return as Kevin Fisher on Tuesday, February 20th on CBS (Monday, February 19th on Global TV in Canada.  It is unlikely that Greg's return will be permanent since he has signed to appear on Days of our Lives.  However, he could continue to make occasional appearances on the show.

Melissa Ordway's (Abby Newman) maternity leave has come to an end and she will be back in Genoa City soon.  In December, Melissa and husband Justin Gaston (ex-Ben Weston on Days of our Lives) welcomed a baby daughter named Sophia.  As Y&R fans know, Abby has been working for Newman Enterprises n Paris.  She is getting over a disastrous relationship with Scott Grainger.  I wonder who she'll become romantically involved with next?  At the moment, there doesn't seem to be any prominent Genoa City residents to match up with Abby.

Although nothing has been confirmed, Soap Central says it has learned that Y&R is considering recasting the role of Kyle Abbott.  Three actors have played the part of Kyle since 2010 but none has really caught on with fans.  Perhaps a new Kyle would be more popular.  Fans will remember that Kyle broke up with Summer and moved to New York.  When the board of directors met o decide whether Jack Abbott should remain CEO of Jabot, Kyle sent in a vote against his father.

Many Y&R fans want Adam to return, although it seems unlikely right now.  Apparently, head writer Mal Young is not planning to bring back the character from the dead.  Furthermore, if Adam were to return, there's almost no chance that Michael Muhney or Justin Hartley would play the role.  That means that a new actor would have to portray Adam.  How do you feel about that, fans?  Would you still want Adam come back if an new actor took over the part.


Would you like Adam to return, with a new actor playing the role?
Created with PollMaker