New on Netflix this March

If you enjoyed former U.S. President Barack Obama's appearance on the original Netflix series My Guest Needs No Introduction with David Letterman, then you will probably want to catch Letterman's next guest.  It's Malala Yousafzai, the Pakistani activist for female education. and human rights.  In 2012, Malala was struck by a bullet and injured by a Taliban gunman because of her activism.  She survived and became the co-recipient of the Nobel Peace Prize in 2014.  At the age of 17, she was the youngest-ever Nobel laureate. (You can watch her interview with Letterman on March 19th).

{Note to David Letterman: I suggest that you get rid of that long, scraggly beard.  Ugh!  It doesn't do anything for you.)

Netflix will also present some original documentaries that deal with issues relevant to Americans and others, such as public health and drug addiction.  Flint Town, which premieres on March 2nd.  It chronicles events in Flint, Michigan as officers deal with poverty and the absence of vital resources.  Take your Pills which premiers on March 16, focuses on the increase in prescription drug use in the United States.

In a lighter vein, the fifth season of Voltron, The Legendary Defender, an animated web television series, will be available for streaming on March 2nd.  Netflix's new baking show, Nailed It, will also be available on March 2nd.  It is hosted by comedian and director Nicole Byer and chocolatier Jacques Torres.  If you enjoy watching botched attempts at designing pastries, cakes and other culinary delights, this show is for you.

Amazon Prime makes deal with CBS for "The Good Fight" 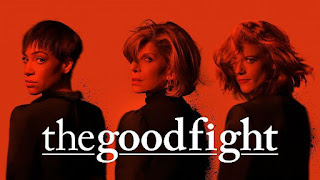 Amazon Prime Video has made an international, multi-season deal with CBS Studios International for The Goodfight, a spin-off of the long-running CBS  hit series The Good Wife.
The Good Fight premiered on February 19, 2017 and stars Christine Baranski in her Emmy-winning role as Diane Lockhart from The Good Wife.  The first season contained ten episodes, the first of which aired on CBS, while the latter nine aired on CBS All Access, CBS' streaming service.  The show has the distinction of being All Access' first original scripted series.  The second season of The Good Fight debuts in the United States. on CBS All Access on March 4.

Amazon's deal with CBS also includes streaming rights to seasons of other hit CBS series such as The Good Wife, Blue Bloods, Hawaii Five-0 and NCIS. for selected territories beyond the United States

Hulu is fighting hard to compete against streaming giants like Netflix, Amazon and Apple.  Netflix has a global audience of 100 million worldwide and 52.8 million subscribers in the United States.  In contrast, Hulu is only available in the U.S, and has 17 million subscribers.

Originally, Hulu was known as a means of streaming episodes of network television show.  In 2015, however, the screen adaption of The Looming Tower, Lawrence Wright's Pulitzer Prize-winning book about Al Qaeda and 9/11, ended up on Hulu.  Then, in 2017, Hulu won eight Emmy Awards for its production of The Handmaid's Tale, based on the dystopian novel by Canadian author Margaret Atwood.

Nevertheless, in a February 25, 2018 article in The New York Times, John Koblin contends that the company's future is uncertain, due to a complex corporate structure and the merger mania that has taken hold in the entertainment industry.  Hulu has four owners: The Walt Disney Company (30 per cent), 21st Century Fox (30 per cent), Concast (30 per cent) and Time Warner (10 per cent).  Disney's $52.4 billion acquisition of most of 21st Century Fox is currently awaiting government approval.  The deal is expected to be approved and would give Disney control of 60 per cent of Hulu.  As Koblin points out, Disney is already developing two streaming services.  Also, Disney owns ABC and Concast owns NBC Universal.  According to Koblin, a media analyst at BTIG, a global financial services firm, stated, "The question is which way it goes: Does Concast buy out Disney? Or does Disney buy out Concast?"

All of this means that Hulu may be caught in the corporate crossfire, at a time when it is particularly vulnerable.  BTIG reported that the company lost $920 million in 2017.  Yet, according to Peter Rice, president of 21st Century Fox, Hulu had more subscriber growth domestically than Netflix.  It still faces intense competition from rival streaming services.