Well, now we know that John Abbott Jr. (also known as Jack) is NOT John Abbott's biological son (unless someone has tampered with the DNA again).  Who then is Jack's father?  I suspect it's Victor Newman, even though Victor doesn't seem that much older than Jack.  If Jack is indeed the son of "The Black Knight," there would be tremendous repercussions and enormous conflict in Genoa City.  Since conflict is the essence of drama, that's exactly what the writers want to achieve.  Just think of all the implications if Jack is Victor's son.  First of all, it would be Jack Abbott's worst nightmare, similar to Luke Skywalker discovering that Darth Vader is his father.  Second of all, if  Victor is Jack's father, that makes him Kyle's grandfather.  It means that both Jack and Kyle are blood Newmans and Jack is half-brother to Nicholas, Victoria and Abby.  It also means that both Jack and Kyle may try to gain control of Newman Enterprises on that basis.

Kyle made a deal with the devil and he will regret it.  He will rue the day he joined forces with Victor Newman.  He had to learn the hard way "The Moustache" just can't be trusted.  Yet, if Kyle turns out to be Victor's grandson, then Kyle has a much stronger hand to play.  Don't forget, though, that Princess Victoria is very much in the picture and that she will not give up her claim to the Newman throne easily.  So, there is going to be a battle royale for the keys to he Victor's kingdom.

Will Sharon ever learn?  At first she was she was cracking up under the pressure of keeping the  secret about J.T.  She was having nightmares and her conscience was bothering her.  Now, she's frantically trying to hide the truth from Nick and lying through her teeth.  I really don't buy the sudden turn-around.  I think it was just done for storyline purposes and to create conflict.  It's a shame because Sharon had really improved herself and was reverting to the sweet Sharon of the past, only older and supposedly wiser.  Now her reunion with Nick will be forever tainted.  When he discovers what she is hiding, he will be furious and disillusioned.  Will he ever forgive her or the three other women involved in the cover-up of J.R death and burial?

It's interesting that the four women involved in the tragic J.T. caper are the most important and influential women in Nick Newman's life: his mother, his sister and two ex-wives, one of whom he is currently having a secret relationship with.  However, I doubt it will be secret much longer  Mariah is quickly catching on and it won't take her much longer to figure out what's going on between her mother and Nick.

I find it difficult to believe that Sharon would be such an ardent defender of Nikki's actions with regard to J.T., since the two women have been at odds for years.  Nick was astounded to see the two women hugging each other and behaving like mother and daughter.  Nikki has always regarded Sharon as a gold digger from the other side of the tracks.  She never thought Sharon was good enough for her son and was unhappy when they married.  However, Nikki could be accused of being a gold digger herself when she hooked up with Victor.  She transformed herself from a stripper to a lady of the manor.

Kyle reminded Nikki of her checkered past when he blasted her for causing the death of his mother, Diane Jenkins.  Her pretty well called her a murderer.  She has killed three times in self-defence - her own father, Diane and now J.T.

Regular Y&R viewer, Fifi in Collingwood, Ontario, has some predictions about Hilary.  She doesn't think that Hilary will be able to  conceive a child.  She foresees Cane and Lily giving baby Sam to Hilary and Devon.  I think Fifi could be right.that Hilary won't be able to become pregnant.  I'm not so sure, however, that Lily will allow Hilary to raise Sam.  It may happen, but Lily seems to be bonding with the child, as was obvious on the Mother's Day Episode.  Having said that, I wouldn't rule out that something may occur to make Lily and Cane decide to give up little Sam.

Mackenzie, Brittany and Raul returned to Genoa City as part of Y&R's 45th anniversary celebration, but we are going to see more of the trio.  They will be around much longer this time.  Lauren Woodland, who plays Brittany, will be on the show for an extended run.  During their recent appearance, we learned that Raul and Brittany are married and that Brittany is now a lawyer.  According to Soap Central, at least one of the two female characters will be involved in a high-profile legal.case.  It seems likely that the case will be related to the death of J.T., since both women have connections to him.  Mac was married to him and Brittany, now an attorney,  had a fling with him.

Days of our Lives had five major wins at the Daytime Emmys, including Best Drama.  The Young and the Restless never seems to win that distinction.  However, Eileen Davidson received an Emmy for Outstanding Lead Actress for her role as Ashley Abbott on Y&R.  Camryn Grimes (Maria Copeland on Y&R) won for Outstanding Supporting Actress in a Drama Series.  That came as a surprise because Marla Adams (Dina Mergergon on Y&R) was widely expected to take home the award in that category.  Maybe she'll win it next years. 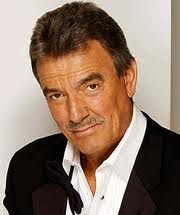 Victor Newman has acquired many nicknames over the years, most of them created by his archrival, Jack Abbott.  Jack's brother, Billy Boy Abbott, has also made a contribution.  He reefers to Victor as "Lurch."  So, fans, what is your favourite nickname for Victor?  Respond to the poll below and let me know.

What is your favourite nickname for Victor Newman?
Created with Survey Maker

That's all for now.  Don't forget that the next edition of Y&R Report will appear in this space on Saturday, May 26, 2018.