Whatever happened to the cast of Silver Spoons?

Silver Spoons, an American situation comedy, ran for for five seasons and 116 episodes.  It aired on NBC for four seasons, from September 25, 1982 until May 11, 1986, and then for an additional season in first-run syndication, from September 15, 1986 until March 4, 1987. The series showcased child star Ricky Schroder, who had made an auspicious debut in the 1979 film The Champ.  Silver Spoons featured Schroder as Ricky Stratton, the 12-year son of divorced parents whose mother had remarried and sent him to a military school.  The youngster wangled an invitation to the palatial home of the wealthy father he had never known.

Edward Stratton III, Ricky's 35-year-old dad was very immature and had avoided taking responsibility for anything in his life. This overgrown child owned a toy company called Eddie's Toys.  His mansion was filled with video games, stuffed animals and a miniature railroad upon which he traversed the rooms of his massive estate.  In a February 2010 interview with Will Harris for Bullz-Eye.com, Rick Schroder stated, "I cannot tell you how many people were, like, blown away by and lost themselves in the world of Silver Spoons.  And everybody asks about the train.  Everybody!  I think the train is in a train park at Griffith Park, over by Universal"

Below is a photo of Joel Higgins as Edward Stratton III in a conductor's hat, riding the train with son Ricky. 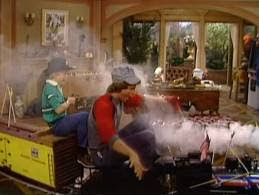 Ricky and Edward had their differences.  Ricky recognized that Edward needed to grow up and Edward thought that his son was much too uptight.  He wanted Ricky to loosen up and have fun while he was still young.  Nevertheless, the pair bonded as father and son.  According to The Complete Directory to Prime Time Network TV Shows 1946-Present, "Ricky soon helped Edward to be a father, while Edward taught his son a little about enjoying life."


WHATEVER HAPPENED TO THE CAST OF SILVER SPOONS?

RICKY SCHRODER (Richard Bartlett Schroder,, Jr.) was born April 13, 1970 in Brooklyn, New York and raised on Staten Island.  He was 12 years old when Silver Spoons first aired.  He continued acting as an adult and billed himself as "Rick" Schroder.  In 2007, however, he announced that he was changing his credit back to "Ricky" because "no one wanted to call me 'Rick'."

Ricky appeared on the 1989 TV Western miniseries Lonesome Dove.  From 1998 until 2001, he played Detective Danny Sorenson on the crime series NYPD Blue.  In 2007, he played Mike Doyle in twelve episodes of the action series 24, starring Kiefer Sutherland.  More recently, he portrayed Robert Lee Parton, Dolly's father, in the 2016 TV movie Dolly Parton's Christmas of Many Colors: Circle of Love.


Ricky Schroder began his career by appearing in numerous television commercials.  His big break came when he starred opposite Jon Voight and Faye Dunaway in Franco Zefferelli's remake of The Champ.  For his performance in the film, Schroder won international recognition.  He also won a Golden Globe for Best New Male Star of 1979.

In September of 2016, after almost 24 years of marriage, Andrea filed for divorce in the Los Angeles Superior Court, citing "irreconcilable differences."

Faith and Cambrie star in Lifetime's reality series Growing Up Supermodel.  The show premiered on August 16, 2017.  It follows the sons and daughters of famous models or actors as they try to launch a modelling career.  The cast also includes their mother, Andrea and actress/model Kelly Le Brock and her daughter, plus size model Arissa Le Brock (Arissa's father is actor Steven Seagal).

Below are photos of Faith Schroder (left) and Cmbrie Schroder (right).

JOEL HIGGINS, an American singer and actor, portrayed Edward W. Stratton III, Ricky's childlike father.  Higgins was born September 28, 1943 in Bloomington, Illinois and is a graduate of Michigan State University  Not only is he an actor, he is an accomplished singer with a stage career spanning over four decades. He originally performed at coffee houses to put himself through school.

During the 1970s, Joel Higgins played the role of Vince in the first national tour of the musical Grease.  He also appeared on Broadway.  In 1975, he appeared on daytime television, beginning his portrayal of Bruce Carson on the CBS soap opera Search for Tomorrow.

From 1981 to 1982, Joel starred in a spoof  of the Old West called Best of the West.  Best of the West was a short-lived series, airing on ABC for just one season of 23 episodes.  Higgins  played Sam Best, a Civil War veteran who became a marshal after inadvertently scaring off a gunfighter.

After five seasons on the hit comedy Silver Spoons (1982-1987),  Higgins returned to television in a new ABC comedy called Have Faith. in the spring of 1989.  He played Monsignor Joseph "Mac" MacKenzie, who oversaw a zany group of Catholic priests at an inner-city Chicago church.  The series received poor ratings and was cancelled after just seven episodes.

During the 1990s and the 2000s, Joel Higgins continued to perform on stage around the United States.  Joel has been married to Stacy Alberts since 1983.  They have one child, s son named Graham Franklin Higgins, born 1991.

ERIN GRAY played Kate Summers Stratton, Edward's secretary, whom he married in February 1985.  Erin was born in Honolulu, Hawaii on January 7. 1950, but moved to California when she was a child.  As a teenager, she met Nina Blanchard, the head of one of Hollywood's leading modelling agencies.  This convinced her to move to New York City and pursue a career in modelling.  She eventually became a top model  In 1967, she made her television debut as a dancer in a variety series called Malibu U, hosted by singer Ricky Nelson

After developing an interest in acting, Erin moved to Los Angeles to seek a Hollywood career..  Universal Studios was so impressed by Erin's TV performances in episodes of Gibbsville (1976) and Police Story (1978) that she was signed to a seven-year contract.  Her performance as a newspaper reporter in Irwin Shaw's 1978 television movie Evening in Byzantium was well-received and led to her next role.  From 1979 to 1981,she played Colonel Wilma Deering in the science fiction television series Buck Rogers in the 25th Century.  She then appeared as Kate on five seasons of Silver Spoons (1982-1987).


After Silver Spoons ended its run, Erin made guest appearances on episodes of series such as Superboy (1992) and Burke's  Law (1994).  In 1997, she played the role Nicole Devlin  in Port Charles, a spin-off the soap Gemeral Hospital.  In 2000, she portrayed Congresswoman Karen Archer in the TV drama Profiler.

Along with Mara Purl, Gray co-authored a book titled Act Right: A Manual for the On-Camera Actor, Haven Books, a handbook for actors.

In 2014, Erin guest-starred on the web series Star Trek Continues in an episode entitled "Lolani."  She played the role of Commodore Gray.

Erin has been married twice.  In 1968, she wed real estate executive Ken Schwartz, who eventually managed her career.  The marriage lasted until 1990 and the couple had one son, Kevan Ray Schwartz (born 1976).  In 1991, Erin married Richard Hissong and their daughter Samantha was born the same year.  Samantha plays Buck Rogers' girlfriend, Maddy in the Internet video series

LEONARD LIGHTFOOT played Leonard Rollins, Edward's lawyer, during the first season of Silver Spoons (1982-1983).  After his departure, Lightfoot was replaced by Franklyn Seales.

In 2003, Leonard appeared in a TV commercial for Toyota.

FRANKLYN SEALES portrayed Dexter Stuffins, Edward Stratton III's finicky business manager.  Seales was born in Calliaqua, St. Vincent, West Indies on July 15, 1952.  The fifth of eight children of Francis Seales, a merchant seaman and government employee, Franklyn was of mixed ethic and racial background: His family left the Caribbean and settled in New York City when he was a child.

Franklyn originally intended to study art.  However, actor/producer John Houseman, who later became Seale's castmate on Silver Spoons, noticed his acting talent and offered him a scholarship at the famed Julliard School.in Manhatten.   Franklyn graduated from Julliard and performed with The Acting Company, a professional theatre company that was co-founded by Houseman in 1972.

Seales caught his first big break in the 1978 PBS drama, Trial of the Moke, in which he portrayed Lt. Henry O. Flipper, the first African-American to graduate from West Point Military Academy.  In the 1979 feature film The Onion Field, he played Jimmy "Youngblood" Smith, the real-life killer of a Los Angeles police detective.

Franklyn went on to play Dexter in 96 episodes of Silver Spoons, from 1983 to 1987.  From 1986 to 1987, he also appeared as Lorenzo Hollingsworth in five episodes of the sitcom Amen, starring Sherman Hemsley of The Jeffersons.  His television credits include a 1987 episode of Growing Pains  entitled "This Is Your Life" (Season 3, Episode 10, Air Date November 17, 1987) and a 1988 episode of the crime drama Wiseguy entitled "Fascination for the Flame" (Season 1, Episode 12, Air Date: January 11, 1988).  In 1989, Franklyn played the role of William Klein in the daytime soap opera Santa Barbara.

On May 14, 1990, Franklyn Seales died from complications from AIDS at his family's home in Brooklyn, New York.  He was only 37 years old at the time of his passing.  During the last years of his life, he worked mostly in non-profit theatre in Los Angeles.

JOHN HOUSEMAN played Edward Stratton II, Edward's father and Ricky's grandfather.  Edward II would make snide comments whenever he visited.  The well-to-do industrialist believed that money should be used to make more money.  His son, in contrast, felt that wealth should be a means of making people happy.

Houseman, a British-American, was born in Bucharest, Romania on September 22, 1902.  A veteran of the stage and screen, he won the Academy Award for Best Supporting Actor for his role as Harvard University law professor Charles W. Kingsfield in the film The Paper Chase (1973).  From 1978 until 1978, he reprised his role as Professor Kingsfield in the television adaptation of the film.  He also played Jewish author Aaron Jastrow in the acclaimed 1983 TV miniseries The Winds of War,.  He received a Golden Globe Award for his performance.

The actor, who spoke with a distinctive English accent, was known for his commercials for the brokerage firm, Smith Barney.  The ads ended with Houseman dropping this memorable slogan; "They make money the old-fashioned way.  They earn it."

Houseman was married twice.  His first wife was Austrian-American actress Zita Johann, best known for her appearance in the 1932 film, The Mummy, starring Boris Karloff.  They were wed in 1929 and divorced in 1933.  He married Joan Courtney in 1952 and that marriage lasted until his death.

John Housman died of spinal cancer at his home in Malibu, California on October 31, 1988.  He was 86 years old at the time of his passing.  His last film appearances included Bright Lights, Big City (1988) and Another Woman (1988).

* Only Ricky Schroder, Joel Higgins and Erin Gray appeared in all 116 episodes of Silver Spoons.

* Ricky Schroder has an older sister, Dawn Schroder Gregg.  Dawn is a model and actress who played Jenny in the 1980s television series, The Facts of Life.  Dawn is married to American actor, director and producer Bradley Gregg.

* Other member of the cast of Silver Spoons included:

CORKY PIGEON, who portrayed Freddie Lippincottleman, another friend, from 1983 to 1985.