Whatever happened to Paula Prentess and Richard Benjamin? 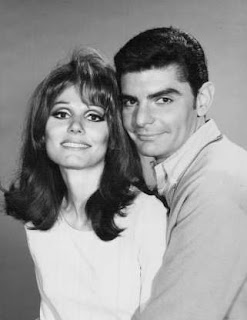 Believe it or not, some celebrity marriages really do last.  Take Paula Prentiss and Richard Benjamin for example.  They wed on October 26, 1961 - that's over 56 years ago.  Although Richard and Paula have one of the longest lasting Hollywood unions, they are still outranked by 101-year-old Kirk Douglas and his 99-year-old wife Anne.  Kirk and Anne were married over 64 years ago, on May 29, 1954 (Note: Comedians Jerry Stiller and Anne Meara also married in 1954, but Meara died in 2015).

Paula Prentiss and Richard Benjamin's two children have followed in their parent's footsteps.  Ross Thomas Benjamin (born March 23, 1974) and Prentiss Benjamin (born July 3, 1978).are both actors.  Ross Benjamin is also an assistant director.  He is principally known for the films Primary Colors (1998), Hard Four (2007) and Chicanery (2017).  Ross appeared in Hard Four along with his mother Paula and his sister Prentiss.

Richard "Dick" Benjamin was born in New York City on May 22, 1938 to a Jewish family.  His father, Roger Benjamin, worked in the garment industry.  Dick attended the High School of Performing Arts in New York City.  He later graduated from Northwestern University in Evanston, Illinois (a suburb of Chicago). While studying acting at the Northwestern theatre school, Richard met Paula, his future wife,  They were married in by a New York judge in 1961, when they were both 23 years old.

Paula Prentiss was born Paula Ragusa on March 4, 1938 in San Antonio. Texas. She is the daughter of Paulene (née Gardner)  and Thomas J. Ragusa.  Her father was of Sicilian decent and he was a Social Sciences professor at the University of the Incarnate Word in San Antonio.  Paula attended Mirabeau B. Lamar High School in Houston before enrolling at Northwestern University.  In 1958, while studying at Northwestern, Paula was discovered by a talent scout and she appeared in the 1960 film Where the Boys Are.  The movie was a solid box office success and Metro-Goldwyn-Mayer offered Paula a seven-year contract.  MGM teamed her with Jim Hutton in a string of comedies such as The Honeymoon Machine (1961), Bachelor in Paradise (1961) and The Horizontal Lieutentant (1962).  She also appeared opposite Rock Hudson in Universal Picture's 1964 romantic comedy Man's Favorite Sport?.  In addition, she starred in Otto Preminger's epic war film In Harm's Way (1965) and in What's New Pussycat? (1965), another comedy.  What's New Pussycat? was written by Woody Allen (his first produced screenplay) and co-starred Peter Sellers, Peter O'Toole and Ursula Andress.

When Paula signed with MGM in 1960, she was asked to wed Dick because the studio did not want Paula travelling on promotional tours with someone who wasn't her spouse The studio also used the couple's wedding as a vehicle for publicity.  According to People magazine, Paula had to make phone calls to Hollywood gossip queens Hedda Hopper and Louella Parsons prior to the marriage ceremony.

By the early 1960s, Paula Prentiss was a bona fide movie star, but it took her husband longer to achieve success in films.  Unlike Paula, Dick first made his mark on TV.  He appeared in a 1962 episode of a television crime series, The New Breed, starring Leslie Nielsen. He he also appeared in two episodes of Dr. Kildare: "The Chemistry of Anger" (Season 1, Episode 29, Air Date: April 26, 1962) and "A Hand Held Out in Darkness" (Season 2, Episode 33, Air Date: May 30, 1963).  In 1966, Dick had a role in an episode of Vacation Playhouse.  However, his big breakthrough on the big screen did not come until his starring role in the 1969 film Goodbye Columbus, opposite Ali MacGraw.  He then starred with Carrie Snodgress and Frank Langella in Diary of a Mad Housewife (1970) and with George Burns and Walter Matthau in Neil Simon's The Sunshine Boys (1975).

Around 1965, Paula had health problems and suffered a breakdown on the set of What's New Pussycat? in Paris.  She was forced to take a respite from acting.  Here is how she described the incident to People magazine: "One day shooting, I just climbed up the ropes to the catwalk and started walking the beams.  Very loudly and clearly I called down to everyone on the set, 'I'm going to jump.'  A French technician grabbed me, and there I was, hanging by one arm."

Paula spent nine months recovering in hospitals, first  in Paris and then in New York's Payne Whitney Psychiatric Clinic.  After her release from hospital, she took a break from acting in order to concentrate on outpatient therapy.  Paula's next project, a television series with Dick, was therapeutic for her.  "It was worth it after what we'd been through," she was quoted as saying in People.  "By working together we learned to live with each other again."

From 1967 until 1968, Richard Benjamin and Paula Prentiss starred in a short-lived CBS television sitcom called He & She (It lasted for one season of 26 episodes).  They portrayed a sophisticated and quick-witted New York couple named Dick and Paula Hollister.  Dick was a comic-book artist and Paula was a social worker.  Also in the cast was Jack Cassidy as Oscar North, the pompous actor who portrayed Dick's cartoon creation, "Jetman," in a TV show.  According to The Complete Directory to Prime Time Network TV Shows 1946-Present, the series "bore more than a passing resemblance to the classic Dick Van Dyke Show."

Although He & She was short-lived, Paula received an Emmy nomination  in 1968 for her work in the series.  She was nominated for Outstanding Continued Performance by an Actress in  a Leading Role in a Comedy Series.  Todd VanDerWerff, in article for AV/TV Club, contends that He & She  was a victim unfortunate timing.  He argues that its ratings would have been higher had it aired during the 1970s.  At the time, CBS did not have "a huge number of timeslots conducive to a witty urban drama about two young married people . . ."  Rural comedies such as The Beverly Hillbillies,
Green Acres and Petticoat Junction were staples on the network back then.

He & She was also ahead of its time in its portrayal of Paula's character as a working wife, which was not common on television at the time.  Below is a 1967 publicity photo for He and She featuring Richard Benjamin and Paula Prentiss with Jack Cassidy.

After the cancellation of He & She, both Paula and Dick were cast in the 1970 black comedy Catch-22.  The film, based Joseph Heller's anti-war novel of the same name, was directed by Mike Nichols and starred Alan Arkiin in the lead role.  Paula Prentiss went on to play the role of Lee Carter in the 1974 political thriller The Parallax View, co-starring Warren Beatty.  She also portrayed Bobbie Marin in the 1975 hit film The Stepford Wives.  Paula was the second female lead in the science fiction horror thriller alongside Katharine Ross.  Richard Benjamin, meanwhile, found success directing movies. In fact, his first film as a director, My Favorite Year (1982), garnered an Academy Award nomination for its star, Peter O'Toole.  Dick also directed such popular as The Money Pit (1986) and Mermaids (1990).

Richard Benjamin and Paula Prentiss starred in a 1981 American horror comedy film entitled Saturday the 14th, a spoof of classic horror movies.  Duriing the 1990s, Paula guest-starred in episodes of Murder, She Wrote (1992) and Burke's Law (1995).

* In 2005, Dick and Paula appeared onstage at the Shadowland Theater in Ellenville, New York with their son Ross in the Arthur Miller play All My Sons.

*  On October 21, 2006, 32-year-old Ross Benjamin married Dr. Elizabeth Robinson, 31.  The couple met at Harvard University and were married at Trinity Church in Princeton, New Jersey.  Dr. Robinson received her medical degree and doctorate in cell biology from the University of Medicine and Dentistry of New Jersey.  At the time of the marriage, she was a a surgical resident at the medical centre of the University of California, Los Angeles.

* Paula had not appeared in a major role in a feature film for decades,until 2016's I Am the Pretty Thing That Lives in the House, a horror film directed by Oz Perkins.  It premiered at the Toronto International Film Festival.

SOURCES: Country Living, January 9, 2018," Paula Prentiss and Richard Benjamin of 'He and She' Have One of the Longest Marriages in Hollywood" by Maria Carter; The Complete Directory to Prime Time Network TV Shows 1946-Present; AV/TV Club, March 10, 2014, "He and She: The great 70s sitcom that aired in 1967" by Tony VanDerWerff; Wikipedia; IMDB.com