What Happened to the Cast of Head of the Class? 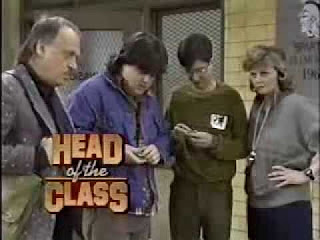 Head of the Class aired on the ABC network for five seasons, from 1986 until 1991.  The sitcom starred Howard Hesseman as a teacher of gifted students at the fictional Monroe High School (later Millard Filmore High School) in Manhattan.  Hesseman portrayed Charlie Moore, a struggling New York actor-director, who worked as a substitute teacher while waiting for his big break.  Moore was assigned to "watch over" a class of student prodigies in the Individual Honors Program. (IHP).  His  students were comprised of a variety of ethnic backgrounds and temperaments.  Their academic interests were diverse.

The Complete Directory of Prime Time Network TV Shows 1946-Present describes Head of the Class as "the flip side of Welcome Back, Kotter."  It says that the students were "so brainy that most their former teachers had just read books while they taught themselves."  It points out that the show revolved around overachieving honours students in contrast to Kotter's underachieving "sweathogs."

The creators and executive producers of Head of the Class were Rich Eustis and Michael Elia.  Eustis worked as a substitute teacher in New York City while aspiring to become an actor. So, the Charlie Moore character was obviously based on Eustis' background.


WHAT HAPPENED TO THE CAST OF HEAD OF THE CLASS 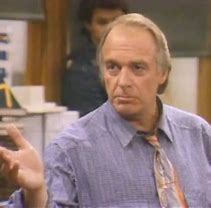 HOWARD HESSMAN played the laid-back teacher Charlie Moore.  He taught his students how to deal with the everyday problems of their age group. He schooled them in life's lessons and encouraged them to go beyond their academic comfort zones.  Hessman left the series after Season 4 and was replaced by Billy Connolly.

Howard Hessman has been married to French-born actress Caroline Ducrocq since 1989. 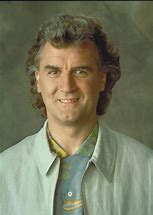 BILLY CONNOLLY played Billy MacGregor.  He succeeded Howard Hessman as teacher of the gifted student's program.  Connolly, a Scottish stand-up comedian, actor and musician, was born in Glasgow on November 24, 1942.  In the 1960s, Billy left his job as a welder in the Glasgow shipyards to pursue a career as a folk singer.  He sang and played guitar and banjo in a folk rock band called The Humblebums along with singer-songwriter Gerry Rafferty and guitarist Tom Harvey.  He eventually became a solo artist and  then made the transition from comic folk singer to a full-fledged comedian.

Billy is now Sir William Connolly.  In October of 2017, he was knighted at Buckingham Palace by Prince Charles for his contributions to entertainment and charity.  In recent years, Connolly has suffered from health issues.  He has had surgery for prostate cancer and has been treated for Parkinson's disease.  In January of 2019, he revealed that his ailments may force him to retire.

Since 1989, Billy Connolly has been married to his second wife, Pamela Stephenson, a New Zealand-born Australian psychologist, writer and comic. Billy is the father of five children, two from his fist marriage to Iris Prssagh and three from his current marriage to Stephenson. 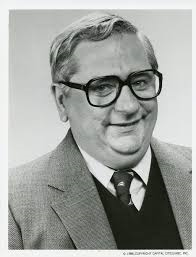 Schilling is now retired from acting.  He played Ben in a 2002 episode of the TV series Still Standing and Detective Carr in a 2000 episode of Pensecola: Wings of Gold. In the 1996 Michael Jordan movie, Space Jam, he played a golfer.  He portrayed Sandford Riggs in the 1993 crime film In the Line of Fire. 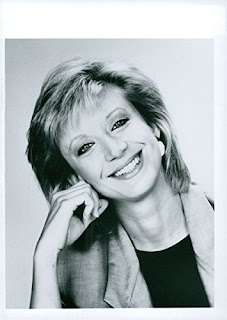 JEANNETTA ARNETTE played the angelic Bernadette Meara, the calm and sensible vice principle.  Although there were romantic sparks between Ms. Arnette and Charlie Moore, nothing became of the attraction.  However, Bermadette later became involved in a romantic relationship with Charlie's successor, Billy MacGregor.

Jeannetta Arnette was born on July 29, 1954 in Washington, D.C.  She was raised in North Carolina.  She attended George Washington University in Washington, D.C.  and became involved in local theatre productions.  However, she dropped out of college and moved to Los Angeles to pursue a Hollywood acting career.  She has appeared in many movies, including Ladybugs (1992) and Boys Don't Cry (1999), as well as in a number of guest-starring roles on television.

In 2006, Arnette co-starred in the Tori Spelling sitcom VHI.  She also portrayed an  innocent death row inmate in a 2006 episode of Criminal Minds.  In 2014, she had a recurring role as Anya Sparks in the CBS series Extant, starring Halle Berry.  Most recently, she played Mrs. Kelly in a 2018 episode of Heathers. 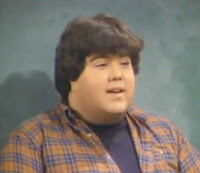 DAN SCHNEIDER played Dennis Blunden, Arvid's best friend.  Dennis was overweight, witty and cynical.  He was a computer whiz who specialized in chemistry and physics.  Dennis was particularly fond of pizza.

Dan Schneider became a producer for the Nickelodeon channel.  He and his Schneider's Bakery team created many of the channel's hit series such as Carly, Drake & Josh, Victorious, Kenan & Kel and Henry Danger.  In March of 2018, Nickelodeon cut ties with Schneider.

In 2002, Dan married food blogger Lisa Lillien.  The couple met at Nickelodeon in the 1990s.  Lisa is the producer of the Hungry Girl website which includes cookbooks, low-calorie recipes, specialty products and television shows. 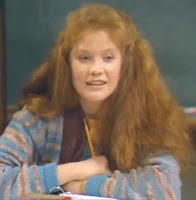 KHRYSTYNE HAJE played quiet, delicate, poetry-loving Simone Foster.  A relationship developed on the show between Simone and Eric Mardian, played by Brian Robins. Eric, an aspiring writer, had a crush on Simone and they had an off-again on-again romance.   Eric was the most unlikely student in the Individual Honors Program as he wasn't outwardly geeky.  He dressed in leather and rode a motorcyle.  In the last episode of the series, Eric proposes to Simone.

Khrystyne Haje was born on December 21, 1968 in Santa Clara, California.  She began her career as a teenage model.  Her first television role was in the 1985 TV movie Crime of Innocence, starring Andy Griffith and Diane Ladd.  She appeared as Sally in the 1987 TV movie Bates Hotel and she played the teenage Chrissy Seaver in a 1990 episode of Growing Pains entitled "Future Shock" (Season 5, Episode 21, Air Date: February 21, 1990).

After Head of the Class, Khrystyne Haje played Kathy Larson in the family comedy TV movie Stepsister from Planet Weird (2000) and she guest-starred in  a 2002 episode of Law & Order: Special Victims Unit.  She had roles in the 1994 science fiction thriller Cyborg 3: The Recycler and the 2002 action film Redemption.  Since the 1990s, she has worked in more theatre productions and
fewer television productions. 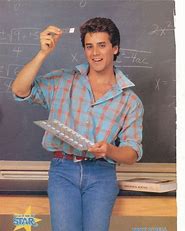 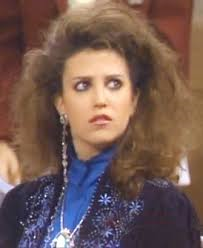 LESLIE BEGA played Maria Borges, a student so driven to perfection that she grounded herself when she received a "B" grade.  She performed in Filmore High's productions of Grease and Little Shop of Horrors.

Leslie Bega was born on April 17, 1967 in Los Angeles, California.  She made her acting debut at the age of six in the Broadway play The Patriots.  She has had had many years of vocal/singing training and has made her mark in Broadway musicals over the years.  In 2001, she performed solo at New York City's Lincoln Center for the Performing Arts.

Leslie Bega is also a business entrepreneur who built a career in commercial and residential real estate.  She starred as a real estate broker on two realty shows: Bravo['s Million Dollar Listing and HGTV's Selling L.A.  On Selling L.A. one of Leslie's own properties was on sale.

On Valentine's Day 1992, Leslie married John Fariss, the drummer for the Australian-based band INXS.  The marriage ended in divorce in 1997. 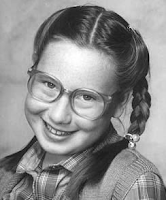 TANNIS VALLELY played Janice Lazarotto, the youngest of the students.  Janice was in high school at the age of 11 due to her high intelligence.

Tannis Kathleen Vallely was born in New York City on December 28, 1975.  She is the daughter of actress Myra Turley and producer/screenwriter Bill Vallely.  Prior to her role on Head of the Class, she appeared in episodes of St. Elsewhere (1984) and Punky Brewster (1986).

Tannis has been married to Jeremy Kromberg since May 22, 2004.  In 2001, she began working as a casting director's office in Los Angeles. 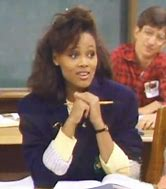 ROBIN GIVENS played Darlene Merriman, a spoiled rich girl who specialized in speech and debate.  She and Alan Pinkard competed for the highest marks in the class.

Robin Simone Givens was born on November 27, 1964 in New York City. She began her acting career with a 1985 appearance on The Cosby Show.  She followed that with a role in an episode of Diff'rent Strokes (1986).


After Head of the Class ended its run in 1991, Robin appeared in some short-lived series and had a number of guest-starring and  recurring roles.  In 2018, she played Dr. Phillips in 15 episodes of soap opera The Bold and the Beautiful.  Robin currently portrays Mayor Sierra McCoy on the television series Riverdale.

Robin Givens is known for her turbulent marriage to boxer Mike Tyson, whom she wed in 1988 and divorced in 1989.  It was a very unhappy union.  Givens alleged spousal abuse, while Tyson claimed she was only interested in his money.  In 1997, Robin married her tennis instructor Svetozar Marinkovic.  That marriage ended in divorce in 1998.

Givens has two children.  She adopted a son, Michael Givens, as a single mother and gave birth to a another son, William Givens, Jensen, in 1999.  Givens' former boyfriend, Murphy Jensen, is William's father.

* The theme music to Head of the Class is instrumental.  It was composed by Ed Alton. The opening credits featured a variety of New York landmarks as well as Charlie Moore's frustrating commute to work.  He arrives late but is happy to see the students.

* In 1988, the cast of Head of the Class travelled to Moscow to film  "Mission in Moscow," a two-part episode, there.  Class was the first American sitcom to film in the  Soviet Union, although some news programs and specials, such as Candid Camera in 1961, had done so before.

*  After Head of the Class ended its run, Billy Connolly appeared in a short-lived spin-off of the series.  It was titled Billy.

*  For the first three seasons of Head of the Class, there were 10 students.  During the fourth and fifth seasons, there were some cast changes.  As mentioned, Janice Lazarotto  went to Harvard, while Maria Borges went to  Performing Arts High School.  Jawaharlal Chouhury (Jory Hussain aka Joher Coleman), an exchange student from India, moved to California.  Some new students were then added to the cast, including T.J. Jones, played by Rain Pryor from 1988 to 1991.  T.J. was a problem student whose slow learning could be attributed to her attitude rather than lack of intelligence.  She worked her way in the IHP.

* In 1991, the students finally graduated from the school, which had been renamed Millard Filmore High School and was set to be torn down.


- Joanne
EDITOR'S UPDATE: Howard Hesseman died on January 29, 2022 in Los Angeles California.  He passed away at the age of 81 due to complications from colon surgery, according to his manager.
Posted by Joanne at 3:47 PM