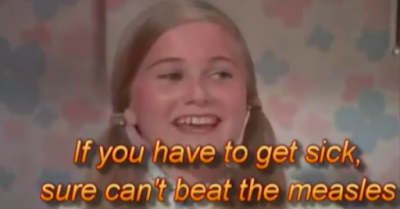 Who would have thought that  a 1969 episode of The Brady Bunch would be at the centre of a vaccine controversy in 2019?  It's happening, though.  The episode in question is entitled "Is There a Doctor in the House?" (Season 1, Episode 13, Air Date: December 26, 1969).  According to National Public Radio NPR), the anti-vaccine movement has been using the episode as an argument against inoculations.

In the episode, all six Brady children have the measles at the same time.  While sick, they are shown having a great old time staying home from school and colouring each other's spots, while their parents and housekeeper Alice (Ann B. Davis) wait on them hand and foot.  As the siblings happily play a game of Monopoly, the eldest daughter, Marcia (Maureen McCormick). declares, "If you have to get sick, sure can't beat the measles."  Almost half a century later, anti-vaxxers have publicized Marcia's image in order to promote their anti-inoculation agenda, much to McCormick's consternation.  She is understandably upset that her Marcia Brady character has become an accidental spokesperson for the ant-vaccine movement.

Maureen is perturbed  that her childhood role is being used to spread false information.  She stated the following to NPR: "I think it's really wrong when people use people's images today to promote whatever they want to promote and the person's image they're promoting they haven't asked or they have no idea where they stand on the issue."  She added, "As a mother, my daughter was vaccinated"  She emphasized the The Brady Bunch depiction of the measles was not an accurate portrayal of what it's really like to suffer from the illness."

Lloyd J. Schwartz, the son of the late Brady Bunch creator Sherwood Schwartz (1916-2011) is also dismayed that his father's show is being used to promote their anti-vaccination cause.  The younger Schwartz said, "Dad would be sorry, because he believed in vaccination, had all his kids vaccinated"

I heartily concur with McCormick and Schwartz. Despite what the anti-vaccine movement wants you to believe, childhood diseases are a big deal.  As a child, I contracted red measles and I can assure you that it was no picnic.  Also, cousin of mine was left with a hearing loss after a childhood bout of the mumps.

This is no trivial matter and should not be taken lightly, given the recent rise in cases of measles.  This disease should be eradicated from the face of the earth.  The fact that the disease has reared its ugly head again is testimony to the damage caused by the anti-vaccine movement.  Amesh Adalja, an infectious disease expert at Johns Hopkins University in Baltimore, Maryland, put it this way: "We're dealing with a disease that should have been taken off the table in the 1960, and now in 2019, when we're planning a mission to Mars, we're dealing with it because we're allowing it to be here"

Hare is some evidence about the increase in measles that should be of grave concern:

* According to a recent report from the Centers for Disease Control  and Prevention, there have been 704 cases of measles reported in the United States so far this year (as of April 25, 2019), the highest number of yearly outbreaks since 1994 - 25 years ago - and the largest number since measles were considered eliminated in the U.S. in 2000.  More than 500 of those 704 infected had not been vaccinated.  This year, cases have been reported in 22 American states.

Sadly measles outbreaks are on the rise again.  For the anti-vaccine movement to use an almost fifty-year-old episode of a fictional  TV series to advance its cause is absolutely unconscionable.  It is shameful.  By the way, that Brady Bunch episode is so outdated that the two doctors made house calls for the Brady kids.  Their mother, Carol Brady (Florence Henderson), called in a female pediatrician for the girls, while their father, Mike Brady (Robert Reed), summoned a male pediatrician for the boys.  Furthermore, it is extremely unlikely that the Brady kids could have been enjoying themselves when the symptoms of measles include fever, cough, runny nose, watery, red eyes and a red rash.