Lucie Arnaz: Then and Now 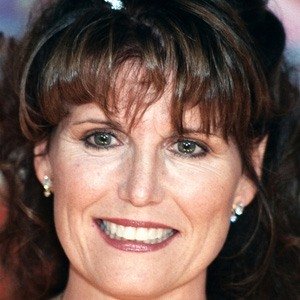 Lucie Arnaz has a remarkable show business pedigree. She's the daughter of Lucille Ball and Desi Arnaz, one of the most celebrated duos in the history of television sitcoms.  Lucie is a also a star in her own right.  Like her parents, she is a versatile entertainer.  She' an accomplished actress of stage, screen and television. and she's a singer too.

Lucie was born of July 17, 1951 in Hollywood, Los Angeles, California.  She came into the world just as her parents were preparing to launch a new television show called I Love Lucy, which first aired on October 15. 1951.  I Love Lucy made television history and it became the Number 1 show in America for four consecutive years.  Audiences couldn't get enough of the antics of the zany redheaded Lucy and her Cuban-born band leader husband, Ricky Ricardo, along with their friends Fred (William Frawley) and Ethel (Vivan Vance) Mertz.

Lucille Ball (born August 6, 1911), was just shy of her 40th birthday when she gave birth to Lucie Désirée Arnaz, her only daughter.  According to the International Movie Database (IMDb), Lucy wanted to name her new baby after her cousin Suzan Ball.  However, Desi wanted to name the child after her mother, as a tribute to his wife.  While Lucy was asleep, Desi wrote the name "Lucie" on her birth certificate.  He decided to spell her name differently to distinguish her from her mother.  Lucie's middle name, Désirée, mostly likely comes from Lucille Ball's middle name, Désirée, or from Lucie's maternal grandmother (Lucy' mother), Désirée Evelyn Hunt.

A year and a half after Lucie's birth, Lucy gave birth to a second child, Desi Arnaz Jr., on January 19, 1953.  Lucy's real-life pregnancy was written into the script of  I Love Lucy., and Lucille Ball became one of the first women ever to appear pregnant on prime time.  Her TV character, Lucy Ricardo, also  gave birth to a son, Ricky Ricardo Jr., ("Little Ricky") on the very same day Lucy gave birth to Desi Jr.  Desi Jr. however, never portrayed "Little Ricky."


I Love Lucy went off the air in 1957.  From 1957 until 1960, a collection of 13 one-hour specials, known as the Lucy-Desi Comedy Hour, were occasionally shown on CBS.  However, things were not happy on the Arnaz homefront.  On May 4, 1960, just two months after filming of the last episode of the Lucy-Desi Comedy Hour, Lucille Ball and Desi Arnaz divorced after twenty years of marriage.  Lucy, it seemed, could no longer tolerate Desi's alleged drinking and womanizing.  She said in court that it "got so bad that I thought it would be better for us not to be together."

Their daughter, Lucie, has had a great deal to say about her parents' divorce.  "They were fighting all the time,when we were growing up.  There was a lot of yelling and screaming," she told Closer Weekly in 2018..  "Their divorce was horrible.  And then there was the alcoholism.  I had preferred those things had never been there.  We didn't have any abuse, but we did go through some pretty hard stuff and that's why my parents didn't stay together."

Yet, according to Lucie, her mother and father were able to maintain an amicable relationship post-divorce.  In 2020, she told Closer Weekly that her parents had "a very successful divorce."  "They never said bad words about each other." she stated,. "and they stayed friends until the day they died."

Two years after her divorce from Desi Arnaz, Lucille Ball returned to weekly television with a new series, The Lucy Show, featuring her I Love Lucy co-star, Vivian Vance.  The Lucy Show ran from 1962 to 1968 and Lucie Arnaz appeared in various roles in eight separate episodes during those years.  Some of her roles were very minor.  In a 1962 episode, she had an uncredited bit part as a spectator.  However, in later episodes, her roles became more substantial.

The Lucy Show was still popular in 1968, but Lucy wanted to work with her children.  By that time, Vivian Vance was only making sporadic appearances on the show and she was ill with breast cancer.  As a result, the series was modified and its title was changed to Here's Lucy..  Here's Lucy ran for six seasons on CBS, from 1968 to 1974.  Luciie Arnaz and her brother Desi Jr, were cast as Kim and Craig Carter, the teenage children of Lucille Ball's character, Lucy Carter.

Below is a 1968 publicity photo for Here's Lucy with Lucie, her brother, Desi Jr. and their mother, Lucille Ball.  Lucie remained with the show until it went off the air in 1974.  Desi Jr., however, left in 1971, to pursue a film career.  He succeeded in landing a couple of good roles, such as the title role in Billy Two Hats, a 1974  Western, co-starring screen legend Gregory Peck, and the role of Marco Polo in Marco (1975). 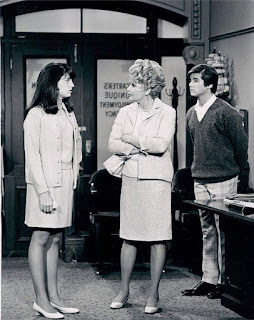 After Here's Lucy ended its run, Lucie Arnaz made guest appearances on Marcus Welby, M.D.(1975), and Fantasy Island (1978).  She played the lead role in Who is the Black Dahlia?, a 1975 television movie about the gruesome 1947 Los Angeles murder of 22-year-old aspiring actress Elizabeth Short, known as "The Black Dahlia" because of her black outfits.  Lucie's other TV movie appearances during this time included Death Scream (1975), Billy Jack Goes to Washington (1977), The Mating Season (1980), Washington Mistress (1982) and One More Try (1982).

In 1985, Lucie was  given  her own comedy series, The Lucie Aranz Show.  She played Dr. Jane Lucas, a psychologist who responds to questions from listeners to  her popular radio call-in  program, The Love and Lucas Show (shades of Frazier).  The series only lasted from April 2 to June 11, 1985.

After the cancellation of The Lucie Arnaz Show, Lucie guest-starred in an episode of Murder, She Wrote (1988),  She also played a leading role in a TV movie called Who Gets the Friends, about a couple being divorced and how the divorce affects their mutual friendships.

In 1991, Lucie starred in another short-lived series called Sons and Daughters.  She portrayed Tess Hammersmith in this comedy-drama featuring an extended family in Portland, Maine.  In her 2011 Archive of American Television interview, Lucie described the show as "beautifully written."  Unfortunately, it was launched at the same time as the Gulf War began.  She remembered that they "kept postponing the show and delaying it, putting in on a different night."  The audience, she stated, never knew when or what time it was going to be on.  Although Sons and Daughters received critical acclaim, CBS camcelled the series, claiming that it couldn't find an audience.  According to Lucie," it was the other way around."

After the cancellation of Sons and Daughters, Lucie Arnaz appeared in more TV movies such as Abduction of Innocence (1996) and Bonne Nuit (1999).  She also guest-starred in a 2003 episode of Law & Order.  Her most recent TV appearance is in a 2020 episode of Will and Grace that pays homage to I Love Lucy.  The episode, which recreates famous scenes from I Love Lucy,  is entitled "We Love Lucy" (Season 11, Episode 16, Air Date: April 9, 2020).  Lucie Arnaz portrayed the no-nonsense factory boss in the classic I Love Lucy  chocolate factory scene, a role that was originally played by character actress Elvia Allman.

When asked about her Will and Grace appearance, Lucie stated the following:

"I know my parents would me over the moon to be honoured this way and by such similar talents who bring the same kind of joy to audiences as they did in I Love Lucy.  I'm thrilled to be invited to the party, and I will do my best to honour the memory of Elvia Allman iconic performance."


Lucie Arnaz has wed twice.  She married actor Philip Vandervort Menegaux on July 17, 1971, her 20th birthday.  Philip, who is professionally known as Philip Vandervort, met Lucie when they both appeared in a 1967 episode of The Lucy Show entitled "Lucy Gets Her Diploma."  He and Lucy also appeared in a 1968 episode of the show entitled "Lucy Gets Involved.".  Their marriage lasted until 1976.

Below is a photo of Lucie and Philip on their wedding day. 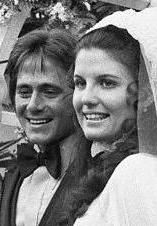 On June 22, 1980, Lucie married actor. playwright and director Laurence "Larry" Luckinbill.  The couple met in 1979, while they were they were both appearing on Broadway, Lucie in They're Playing Our Song and Laurence in Neil Simon's Chapter Two.  They have three children together: Simon (born in 1980), Joseph (born in 1982) and Katharine "Kate" (born in 1985).  Lucie is also stepmother to Laurence's two sons from his previous marriage to actress Robin Strasser: Nicholas (born 1969) and Benjamin (born 1975).  Luckinbill.  Strasser is best known for her role as Dorian Lord in the now-defunct ABC daytime drama One Life to Live.

* In her Archive of American TV interview, Lucie stated that when her mother wanted to remarry, it was like a knife in the heart, 'cause you're kidding, right?  It's only been a year, not even."  Still, she described Gary Morton as "a nice guy . .a funny guy, comedian."  She said he was "a good stepfather."

* Lucie Arnaz starred opposite Neil Diamond and Sir Laurence Olivier in the 1980 musical drama film The Jazz Singer.  She played the role of Molly Bell, for which she received a Golden Globe nomination.

* Lucie Arnaz co-starred In the 2011 feature film, Smoking Nonsmoking (also known as The Pack), along with Elisabeth Moos.  Lucie portrayed a wife and mother whose husband dies from cancer.  Her son testifies against her for killing his father with secondhand smoke.

* During the 1960s, Desi Arnaz Jr. was a drummer and vocalist for the band Dino, Desi & Billy.  In addition to Desi Jr., the band consisted of Dino Martin (Dean Paul Marrtin), the son of singer/comedian Dean Martin, and the third member of the group was guitarist/vocalist Billy Hinsche.

* Lucie Arnaz and Laurence Luckinbill formed ArtLuck together, which produced Lucy and Desi: A Home Movie for NBC in 199, an Emmy-winning documentary about Lucie's parents.

* In the year 2000, Lucie wemt to London, England, where she  spent a year and a half performing in the West End production of Witches of Eastwick.