The Life and Times of Sanford and Son's Demond Wilson 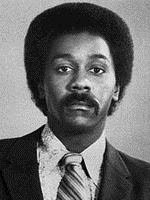 "You can't say that Sanford and Son was dramatic, was serious.  It was foolishness.  I didn't watch it then, and I don't watch it now."

When he was almost 40 years of age, Demond Wilson, the actor, turned his back on Hollywood and became Reverend Demond Wilson, a fire and brimstone evangelist.  Demond is best known for his portrayal of Los Angeles junk dealer Lamont Sanford in the 1970s sitcom Sanford and Son,  In the 1980s, however, he left the entertainment business behind to become a fundamentalist preacher.

Grady Demond Wilson was born on October 13, 1946 in Valdosta, Georgia.  He was raised in New York City, where his mother Laura, was a dietitian and his father was a tailor.  Demond studied dancing and ballet.and he made his Broadway debut when he was four.  When he was 12, he danced at Harlem's famed Apollo Theater.  Around that time, his appendix ruptured and he almost died.  After his youthful brush with death, he vowed to serve God in some ministerial capacity when he reached adulthood.

Demond was raised as a Catholic and he was an altar server, but he always spent summer vacation with his Pentecostal grandmother in Georgia.  She was a very religious woman and brought him to Pentecostal services.  At 14, Demond seriously considered the priesthood, but eventually chose a career in acting.

Beginning in 1966, Demond served a 13-month tour of duty in the United States Army.  He was a member of the 4th Infantry Division in Vietnam, where he was wounded.  Upon his return to civilian life, he was featured in several Broadway and off-Broadway stage productions.  He then moved to Hollywood where he began appearing in television guest spots.  He played Horace, a house burglar, in a 1971 episode of All in the Family entitled "Edith Writes a Song" (Season 2, Episode 4, Air Date : October 9, 1971).  He also had a guest role as Simmons in a 1971 episode of Mission Impossible entitled "Underwater" (Season 6, Episode 8, Airdate: November 6, 1971).

It wasn't long before Demond was cast in  a co-starring role on Sanford and Son, the show the would make him a bonafide television star.  Sanford and Son was produced by Norman Lear.  It was Lear's second major hit after All in the Family, and like All in the Family, Sandford and Son was based on a popular British comedy.  It was an American version of Steptoe and Son, a BBC sitcom about a father-and-son rag-and-bone business in London.

Sanford and Son ran for six seasons on the NBC network.  It debuted on on January 14, 1972 and chronicled the lives of Lamont Sanford and his father, Fred, partners in a junk dealing  business in L.A.'s Watts district.  Redd Foxx portrayed Fred G. Sanford, a crusty 60-something widower, who was often verbally abusive toward hi son.  The 30-something Lamont was far more progressive than Fred, who was satisfied with being a junk dealer and really didn't want to change his lifestyle.

In 1974, Redd Foxx left Sanford and Son due to a disagreement over salary.. His character was written out and Demond became the main  focus of the series for a while.  Redd returned the next season after the dispute was settled.  The show continued until its cancellation in 1977.

Below is a 1972 photo of Demond Wilson and Redd Foxx as Lamont and Fred Sanford. 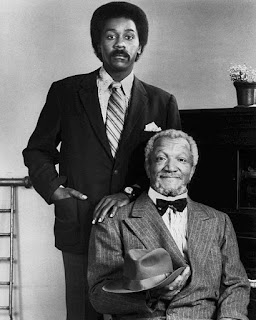 After  the finish of its sixth season in March of 1977, Sanford and Son came to an end, not because of low ratings, but because Redd Foxx accepted an offer from ABC to host his own variety show Demond could have continued without Foxx, but he refused to do so without an increase in salary.  NBC turned down Demond's request for a raise and he decided to leave the series too.

Redd Foxx's variety show lasted less than a year.  Three years later, Red returned to NBC with a new comedy called Sanford.  Demond did not appear on this show, so his character, Lamont, was said to be away working on the Alaskan pipeline.  In the new series, Fred Sanford was still running his L.A. junkyard, but there was a new cast of characters surrounding him. Unfortunately for Redd, his Sanford revival failed to attract viewers and the series was short-lived.

After leaving Sanford and Son, Demond Wilson starred in a new sitcom for CBS called Baby..I'm Back.  He portrayed a compulsive gambler named Raymond Ellis who abandons his wife Olivia (Denise Nicholas) and their two children and movies to California.  Seven years later, Ray discovers that Olivia has declared him legally dead and that she is engaged to another man.  He decides to return and try to win her back.

Baby...I'm Back was short-lived.  The pilot was filmed in 1977 and the series aired between January and May of 1978.   It was cancelled despite decent ratings.  Below is a photo of Demond in a scene with Denise Nicholas in Baby...I'm Back. 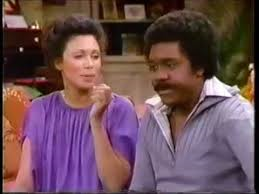 Demond guest-starred in two episodes of The Love Boat, the first in 1979 and the second in 1981.  In 1981, he also appeared in an episode of Today's F.B.I.  From 1982 to 1983, he co-starred with the late Ron Glass in an African-American remake of the TV series based on Neil Simon's play, The Odd Couple, about  two divorced men who share a New York apartment.  The show was called The New Odd Couple and Glass played the role of the fastidious Felix Unger, while Demond portrayed scruffy Oscar Madison. 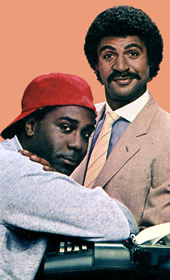 After he became a preacher, Demond did not stay away from acting completely and he continued  to appear on TV talk shows.  From 2004 to 2005, his portrayed of Kevin Miles in four episodes of the long-running sitcom Girlfriend. and he made numerous appearances on the Praise the Lord (PTL) TV program.  In addition, he toured with Nina Nicole in a production of the play The Measure of a Man.


On May 3, 1974., Demond Wilson married Cicely Loise Johnston, a former flight attendant who later became a model.  They have six children:The four eldest are named Nicole, Melissa, Christopher and Demond Jr.  As of this writing, Demond and Cicely have been wed for 46 years.

At the height of his Hollywood career, Demond Wilson was earning $40,000 a week.  He lived in a 27-room Bel-Air mansion and owned a Rolls Royce.  He also had a very expensive cocaine habit and a troubled marriage.  He felt very alone at the time.

In a 1985 interview with Jet Magazine, Demond was very candid about t his addiction to heroin and how he didn't enjoy his work on Sanford and Son.  He said the following  "I had had it after the third year of Sanford and Son.  Nothing was real.  When you come into the newness of things, your first luxury car, your first Mercedes, your first house.  All of those things seem exciting and thrilling.  But after they wear off, you're faced with reality, and that reality is that your life is empty.  I had worked all those years gearing myself for stardom but thing that I failed to do was have a life.  I barely knew my wife and children."

In the interview, Demond revealed that before he arrived in California, he was on heroin.  He stated that when he came home from Vietnam, he was also on heroin.  He admitted that while filming a movie in Canada called The Dealing (1970), he was using the drug then too.

However, Demond's life changed in March of 1983, after the cancellation of The New Old Couple. He experienced a spiritual awakening and spent the following eight months praying and reading the Bible.  He tried  improve himself and turn his life around.  He set out to repair the damage that his acting career, and the infidelities that went along with it, had done to his marriage.  He moved his family away from Bel-Air and "that plastic atmosphere of Hollywood."

In the fall of 1984, Demond Wilson was ordained as an interdenominational minister.  Since then, he has been on the gospel circuits,  He has appeared at large auditoriums with an entourage consisting of a secretary, two body guards, a five-piece band and up to eight singers.

Despite his disdain for Sanford and Son, Demond willingly acknowledged in a 1986 interview with the Los Angeles Times that "I wouldn't be attracting thousands of people to my crusades without the name recognition that show gave me."

* Redd Foxx passed away on October 11, 1991 after suffering a massive heart attack while on a break from rehearsals on the set of The Royal Family, his  new sitcom with friend and co-star Della Reese. He was 68 years old at the time of his death.

* In 2009, Demond Wilson released a book entitled Second Banana: Bittersweet Memoir of Sanford and Son, about the behind-the-scenes happening on the show.  Demond is also the author if several children's stories and a book called The New Age Millennium: An Expose of Symbols, Slogans and Hidden Agenda, which is highly critical of the New Age Movement. 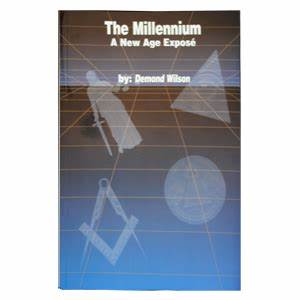