The Life and Times of John Astin 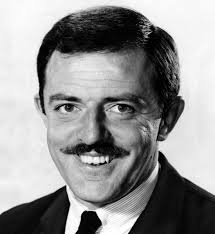 "My work is to reach people with ideas, hopes, dreams, encouragement, insight, and revelation.  That's what an actor wants to do."


"What The Addams Family says is that it doesn't matter what you're like outside, it's inside that counts.  That's why people who are disowned by society like the show so much.  Real values are there underneath.  During the run of the show, psychiatrists wrote articles about how it was the healthiest show on the air.  It was an affirmation of life."


John Astin is known as a comedic actor with dark hair and a trade mark mustache.  Although he has appeared in many films and television series, he'll always be be remembered for his role as Gomez Addams in The Addams Family.  John celebrated his 90th birthday in March of this year and he remains active.

John Allen Astin was born in Baltimore, Maryland on March 30, 1930.  His parents were Margaret Linnie (née Mackenzie) and Dr. Allen Varley Astin.  Dr. Astin, was a physicist.and the director of the National Bureau of Standards (now known as the National Institute of Standards and Technology).  John had a younger brother, Alexander W. Astin, born on May 30, 1932.  The Astin family lived in Bethesda, Maryland.

John studied mathematics at Washington & Jefferson College in Washington, Pennsylvania and he initially gave no thought to a professional career as an actor.  However after seeing a performance of Thornton W.ilder's Our Town, the theatre began to capture his imagination, and he gained a new respect for the medium.  At that time, there was no theatre program at Washington & Jefferson, so,  he transferred to Johns Hopkiins University in Baltimore, where he graduated with a B.A. in drama in 1952

John launched his acting career on the stage and made his first Broadway appearance as an understudy in George Bernard Shaw's Major Barbara..  He also did voice-overwork in commercials and he had a small uncredited role as a chaperone at a dance in the 1961 film West Side Story in which he played Gladhand, a well-meaning, but inept social worker.  The hit musical garnered 10 Academy Awards, including Best Picture.

At this time, John Astin caught the eye of actor Tony Randall, who noticed his talent for comedy.  As a result, he was cast in guest-starring roles in such television sitcoms as  Hazel (1962), starring Shirley Booth, Dennis the Menace, starring Jay North (1962), The Donna Reed Show (1961) and Harrigan and Son, starring Pat O'Brien (1961).  He also appeared in a 1962 episode of Ben Casey, a 1961 episode of The Twilight Zone, "One Hundred Yards Over the Rim" (Season 2, Episode 23, Air Date: April 7, 1961) and a 1960 episode of the Western series Maverick.

From 1964 to 1966, John Addams starred in The Addams Family, a television comedy about a macabre family.   The show  was based on Charles Addams' cartoons in  in The New Yorker magazine.  John portrayed Gomez Addams, the patriarch of the weird clan.  Gomez was a crazy millionaire who enjoyed losing money in the stock market.  Carolyn Jones played his raven-haired wife, Morticia, who nurtured a man-eating plant named Cleopatra.  Their daughter, Wednesday, played with a headless doll called Marie Antoinette and their son Pugsley Addams blew up dynamite caps.

In his 2018 interview with American Television Archives, John said he thought the romance between Gomez and Morticia should be "on a grand scale."  He wanted them to "have a relationship of great passion."


Of his role as Gomez Addams and his association with The Addams Family, John made the following remarks in his Wolverton Mountain Review interview: "The feedback I get from my association with Gomez is heartwarming.  It is very difficult for me to take anything but a positive view of the Gomez phenomenon.  Probably, it has kept me out of roles that I might otherwise have played because of the extreme identification with that character.  But, there is no way I can diminish my indebtedness to that program."  He added that he wouldn't trade his association with The Addams Family for any role he might have missed.

The Addams Family was initially a hit, but its popularity waned after two years.  After the show was cancelled, John continued to appear in guest roles in episodes of many popular television series.  In 1967, he played The Riddler in two episodes during the second season of Batman, replacing Frank Gorshin, who was unavailable at the time due to a contract dispute.  Gorshin was upset about being replaced as the villainous Riddler, but agreed to return to the role the following season.

Carolyn Jones also portrayed a villain on the 1960s Batman series.  She played Marsha, Queen of Diamonds in five episodes.

From 1977 to 1978, John played the role of Lieutenant Commander Matthew Sherman in 23 episodes of the high seas comedy, Operation Petticoat, about a U.S. submarine that has to take on a group of female nurses.

Below is a 1977 publicity photo of John Astin for Operation Petticoat. 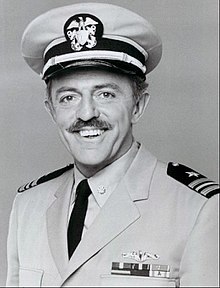 
John Astin has been married three times and has five sons.

Sean's  paternity was questioned (Although Patty claimed that John, who was married to Suzanne Hahn at the time, was her son's biological father,).  There had been media speculation that Desi Arnaz Jr. might be Sean's father, as the result of Patty's scandalous relationship with the then-17 year old Araaz.).  Of his son Sean's birth, John told People magazine in 2001 that there was "a a bit of stuff in the press early on. (Sean) basically grew up without any real  knowledge of all that stuff."

When Sean was 14, Patty told him that Desi Arnaz Jr. was his biological father,  Sean then developed a relationship with Arnaz .  When Sean was almost 26, a relative of Michael Tell, Patty's former husband, suggested that they were related.   Patty had impulsively married Tell, a virtual stranger, who had been subletting her apartment.  The two were only together for 13 days and their marriage was annulled a year later.

Determined to uncover the truth, Sean underwent DNA testing.  In 2001, he revealed to People that Michael Tell was his biological father.  Despite maintaining relationships with all three men, Sean regards John as his father.  John stated that his "spiritual connection" with his son is more important than DNA.

After 13 turbulent years of marriage, John Astin and Patty Duke divorced in 1985

* John's Addams Family co-star, Carolyn Jones, died of colon cancer on August 3, 1983.  She was 53 years old at the time of her passing.  Of John's seven castmates on the series, the only other survivors are Lisa Loring  (born February 16, 1958), who played daughter Wednesday Addams, and Felix Silla (born January 11, 1937), the Italian-born American stuntman, who played the costumed Cousin Itt, a diminutive being, composed entirely of floor-length hair, a bowler hat and sunglasses.

* John's brother, Alexander Astin, is an educator, researcher and author.  He is the  Alan M. Cartter Distinguished Professor Emeritus of Higher Education and Organizational Change at the University of California, Los Angeles.  He is a founding director of the Higher Education Research Institute at UCLA.

* John received an Academy Award nomination for Prelude, a 1968 short film he wrote, produced and directed. It's about a TV repairman (Astin) who meets his dream girl, but fails to win her over.  He eventually appreciates the reality of his situation.

* John  practises Nichiren Buddhism.  He is a member of the Soka Gakkai International, a worldwide Buddhist association.

* John's sons, Sean and Mackenzie, are both actors.  Sean Astin is known for his roles in The Goonies, Rudy and The Lord of the Rings trilogy, whole Mackenzie Astin appeared on the TV sitcom The Facts of Life and in the films Love and War and Iron Will.


During filming of The Evening Star, a 1996 comedy-drama, Mackenzie Astin was injured in a car accident.  He lost the edge of his right ear. and he was fitted with  a prosthetic attachment in order to match the scenes already filmed.  It was attached to his right ear for the duration of the production.