Keeping up with Wayne Knight 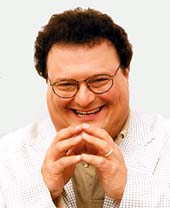 Wayne Knight is a versatile actor who has appeared in several high-profile films during his career, including Jurassic Park and Dirty Dancing.  He's performed in many movie and  television dramas, but he's best known for his comical portrayal of the snarky Newman, Jerry's annoying neighbour on Seinfeld.

Wayne Elliot Knight was born in New York City on August 7, 1955 to  William Edward Knight, a supervisor at a textile factory, and Grace (Monti) Knight.  Wayne is of Italian and English descent and he comes from a Catholic family.  He was raised in Cartersville, Georgia, where his father continued to work in the textile industry.  Wayne attended local schools and was a linesman on his high school football team.  In 1972, he entered  the University of Georgia, but dropped out to join the Barter Theatre Company in Abingdon, Virginia.  He  finally obtained a Bachelor of Fine Arts degree in 2008.

After a two-year internship with the Barter Theatre Company, Wayne became a professional actor.  He was hired by the company and received his Equity card.  He then returned to New York, where he made his Broadway debut.  In 1979, At the age of 23, he appeared in the long-running comedy Gemini.

After his stint on Broadway, Wayne Knight worked as a private investigator in New York for five years.  In an interview with @Seinfeld2000 for Vice, Wayne described his job as a private eye.  He stated, "I did all kinds of things from background investigations on people trying to get employed, to following people who were infidelitous (sic).  I [did] some stuff in venture capital  The most interesting stuff was where I was talking to admirals and heads of industry about people doing recombinant DNA work."

Wayne went from being a private eye  to appearing in some of the most popular and successful films of the 1980s and 1990s, such as Dirty Dancing, Born on the Fourth of July, JFK, Basic Instinct, and Jurassic Park.  In Dirty Dancing (1987), Wayne took on the minor role of Stan.  In Oliver Stone's Born on the Foutth of July( 1989), he was Official #2.  In JFK (1991), another Oliver Stone film, he played Numa Bertel Jr., an assistant to Orleans Parish District Attorney Jim Garrison (Kevin Costner).  In Basic Instinct (1992), Wayne had a relatively small part as one of the two detectives interrogating Sharon Stone in her infamous leg-crossing scene.  In the 1993 film Jurassic Park, Wayne played Dennis Nedry. He flew to Hawaii for the filming of the movie and didn't meet director Steven Spielberg until his first day of shooting.  Wayne's portrayal of Nedry earned him a Saturn Award nomination for Best Supporting Actor.

From 1992 to 1998, Wayne appeared as Newman, a disgruntled postal worker, on 45 episodes of Seinfeld, one of the most acclaimed comedies on American television.  Wayne's first on-screen appearance as Newman occurred in the third season of the show, in an episode entitled "The Suicide."  The episode aired on January 29, 1992.  Although the Newman character had been established in a previous episode called "The Revenge" (Season 2, Episode 7. Air Date: April 18, 1991), he had not yet been seen on screen.  His voice had been provided by comedian/writer Larry David, the co-creator of the show with Jerry Seinfeld.

In the Seinfeld series, Newman and Jerry lived on the same floor of their apartment building on 129 West 81st Street in New York City.  Newman lived in Apartment 5E, directly down the hall from Jerry's Apartment 5A.  Cosmo Kramer, played by Michael Richards, lived in Apartment 5B.  Newman was the ultimate annoying neighbour.  He was always doing something annoying such as attracting fleas to the apartment building and not delivering the mail on time.

Although Newman was on good terms with Kramer, he became Jerry Seinfeld's nemesis.  Seinfeld's eponymous character once stated that he had "looked into the eyes of Newman," and that he was "pure evil."  He also once described Newman as the Lex Luther to his Superman.   In an interview with BuzzFeed Brews, Jerry Seinfeld stated that 'The real answer for why I hated Newman was because it just seemed funny to hate Newman."

Still, the source of the animosity between Jerry and Newman is never explicitly revealed on the show.  However, it is implied in "The Suicide," Season 3, Episode 15) in which Newman causes trouble for Jerry.  Newman seems to resent Jerry's success as a stand-up  nightclub comedian.  In the episode he refers to Jerry's audience as a "half soused nightclub rabble that lap up your inane observations." One reason why Newman  schemes against Jerry is that he doesn't think Jerry is deserving of the recognition he receives.

Newman certainly had a fondness for motor vehicles.  He drove his postal truck for business as well as for pleasure.  He also had a 1975 Brown Diplomat, as well as a Silver Corvette convertible and a black Acura NSX.  In a 2012 interview with AV Club, Wayne Knight opined that his favourite Newman episode is "The Ticket" (Season 4, Episode 4, Air Date: (September 16, 1992), a two-parter in which Newman swaps his radar detector for a motorcycle helmet, and is picked up for speeding.

Newman had a long-standing crush on Elaine Benes, played by Julia Louis-Dreyfus.  Elaine and Jerry lived together for a time and they had an on and off relationship.  In an episode during the show's ninth and final reason, "The Serenity Now" (Season 9, Episode 3, Air Date: October 9, 1997, Jerry undergoes a personality change and proposes to a surprised Elaine.  In a later episode during that same season, "The Reverse Peephole" ("Season 9, Episode 12, Air Date: January 15, 1998), Newman actually has a chance to hook up with Elaine but tells her that his heart belongs to another man's wife" (Svetlana, the wife of his landlord, Silvio).

From 1996 to 2001, Wayne portrayed Officer Donald "Leslie" Orville  on Third Rock From the Sun, an NBC comedy about a group of aliens sent to Earth disguised as a family of humans.  His character, known as "Officer" Don, was a police sergeant in the town of Rutherford, Ohio.

Wayne appeared in a 2009 episode of Larry David's series Curb Your Enthusiasm.  The episode, entitled "The Table Read" (Season 7, Episode 9, Air Date: November 15, 2009), is about a Seinfeld reunion show.

From 2010 to 2011, Wayne had a recurring role on the TV Land sitcom Hot in Cleveland, starring Valerie Bertinelli, Jane Leeves and Betty White.  He played Rick, a columnist for The Plain Dealer, an Ohio-based newspaper.
From 2011 to 2015, Wayne portrayed computer-savvy Haskell Lutz on The Exes, a TV Land sitcom  about a group of divorced friends trying to readjust to the single life.
Wayne reunited with Jerry Seinfeld and another of his Seinfeld castmates, Jason Alexander (George Costanza) for an episode of Comedians in Cars Getting Coffee, a Netflix series in which Jerry is joined by friends for some coffee and a drive in a classic car.  Jason and Wayne appeared in an episode entitled The Over-Cheer (Season 3, Episode,  Air Date: January 15, 2014).  It was written by Larry David and Jerry, and directed by Larry David.  In the episode, Jason and Wayne play their Seinfeld characters and Jerry and George go for coffee on Super Bowl Sunday.
In 2017, Wayne made an appearance as Irv on the daytime soap The Young and the Restless.  He also portrayed Alan Starkman in a two-part September 1, 2017 episode of the crime-drama Narcos.

In 2018, Wayne guest-starred as Gregor in an episode of Law & Order: Special Victims Unit entitled "Service" (Season 19, Episode 18, Air Date: April 11, 2018).  He also played the role of Benjamin Roth in The Truth About the Harry Quebert Affair, a ten-episode TV min-series about a writer who gets caught up in a murder investigation.  It stars Patrick Dempsey in the title role.

* Wayne Knight has been married twice.  His first wife was makeup artist Paula Suitor.  They wed on May 26, 1966 at a ceremony at the home of fellow Seinfeld cast member Michael Richards (Cosmo Cramer).  The couple divorced in 2003.

* Wayne's Seinfeld character was never given a first name.  There had been speculation that his first name was "Norman" due to an episode entitled "The Bottle Deposit, Part 2 (Season 7, Episode 2) in which a farmer's daughter shouts, "Goodbye, Norman!"  That was actually an error.  The actress misread "Newman" for "Norman" in the script.

* An obsession with food has plagued Wayne Knight since he was growing up in Georgia.  However, the actor managed to lose almost 45.35 kilograms (100 pounds) after Seinfeld ended its run in 1998.  He shed the weight through diet and exercise.  He was at his heaviest while filming Jurassic Park in the early 1990s.  At that time, he weighed 148.3 kilograms (327 pounds).

* Wayne Knight is a talented voice artist.  He has enjoyed a prolific voice-over career in both television and films.  Over the years, he has had voice-over roles in animated movies such as Space Jam (1996), Toy Story 2 (1999) and Kung Fu Panda (2008) and in animated TV series such as Legend of the Three Caballeros (2018).  Most recently, he voiced The Penguin in Harley Quinn (2019, 2020)., a TV adventure cartoon that takes place in Gotham city.

* In March of 2014, Wayne was the target of a cruel hoax.  The website TMZ Today (an imitation of TMZ) falsely reported that he and two other passengers had been killed in a car crash near the Pennsylvania-New York border. The actor set the record straight on his official Twitter account.  He wrote the following: "Some of you will be glad to hear this, others strangely disappointed but . . . I am alive and well!" 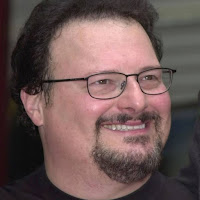