The Life and Times of Jack Lord

" . . . Five-O was his show and McGarrett was his character – no doubt about it. It was such a unique concept at the time and the character was so easy to admire. I think when he told his wife after he read the part that this was the one they were waiting for, he knew too this was something special and he was the right one for the job."

Jack Lord was an accomplished stage and film actor, but it was his role as television's Steve McGarrett on Hawaii Five-O that made him a star.  John Joseph Patrick Ryan, better known as Jack, was born on December 30, 1920 in New York City, the son of Irish Americans  His mother, Ellen Josephine O'Brien Ryan (1892-1994) was a housewife.  His father, William Lawrence "Bill" Ryan (1887-1996), was a ship surveyor, ensuring that ships and their cargo were safe.  Although most references describe Bill Ryan as a steamship company executive, Jack said his father owned a fleet of five ships, each with the word "angel" in their names,  Consequently, young Jack loved the open sea and he loved sailing.

At the time of Jack's birth, the Ryan family lived in an apartment house in Brooklyn.  They later moved to Morris Park (now known as Richmond Hill), Queens, New York, where Jack was raised.  Jack was the second of the five Ryan children.  His four siblings were William Lawrence "Bill" Ryan Jr. (1918-1982), Josephine S. Ryan (1923-2001), Thomas Herbert Ryan (1928-2006) and Robert Gerard Ryan (1935-2003).  Their mother Ellen's family owned a fruit orchard in New York state's Hudson River Valley.  It was there that young Jack spent his summers and learned to ride horses.

Jack attended Saint Benedict Joseph School, a Catholic grammar school in Morris Park (Richmond Hill). and then John Adams High School, a public high school  in the Ozone Park neighbourhood of Queens.  In June of 1938, the 17-year-old  graduated from John Adams High.  Below is "John Ryan's" photo from the senior issue of the school's yearbook, The Clipper.  The bottom photo shows Jack with his football team.  He is reclining in the foreground of the picture. 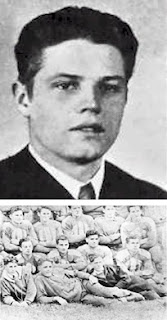 Jack's childhood dream was to be an artist.  When he was 12 years old, he entered a poster contest sponsored by the American Society for the Prevention of Cruelty to Animals (ASPCA).  His poster  won first prize.  As a teen, he spent his summers at sea in the Merchant Marine.  From the deck of ships, he painted and sketched landscapes from around the world.  In 1941, the aspiring artist made his first professional sale to the Metropolitan Museum of Art for two linoleum cuts, Vermont and Fishing Shacks, Block Island.
After finishing high school, Jack studied at New York University (NYU) for four years on a football scholarship.  He majored in fine art and graduated in 1942.  While at NYU, Jack and his brother Bill founded the Village Academy of Arts in Greenwich Village, where the siblings directed art courses.  However, Jack's career as an artist had to be put on hold when the United States entered World War II.  Throughout the war, Jack served in the Merchant Marine.

In June of 1945, Jack received a commission with the U.S. Maritime Commission and was given the rank of ensign with a third mate's licence.  This made it mandatory for him to remain in the Maritime Service for an extra period of time.  After the war, Jack spent a year in Persia as a steel worker with the U.S. Engineering Service.  He then briefly served on a merchant ship after which he underwent deck training at the U.S. Officer's Training School, then located at the Coast Guard Academy at Fort Trumbull in New London, Connecticut.

Jack was sent to Washington, where he worked as an artist for service publications and appeared in maritime warfare training films.  It was then that he developed an interest in acting, which remained with him when his obligation to the Marine Service ended in 1948.  He returned to New York City and  studied drama at the Neighborhood Playhouse School of the Theatre, where he was trained by renowned acting coach Samuel Meisner.  He also studied at Actors Studio.  To support himself in those days, he worked as a car salesman.

Jack Lord's first commercial film role was in a bit part in 1949's The Red Menace, an anti-communist production, also known as Project X.  He was then billed as Jack Ryan.  On October 27, 1954, Jack made his Broadway debut as Slim Murphy in Horton Foote's The Traveling Lady.

In 1955, Jack succeeded Ben Gazzara on Broadway in the role of Brick in Tennessee Williams' Cat on a Hot Tin Roof.  Then it was on to Hollywood.  From 1955 to 1959, Jack appeared in several films including The Court Martial of Billy Mitchell (1955), Tip on a Dead Jockey (1957) and God's Little Acre (1958).  He had his first real leading role in The True Story of Lynn Stuart (1958), starring Betsy Palmer., in which he portrayed a drug-dealing thug.

From 1962 to 1963, Jack starred in his first regular series role as champion rodeo rider Stoney Burke in an ABC's Western drama of the same name.  Five years later, he got his big break and was cast in his second series, a CBS police drama called Hawaii Five-O.  For 12 seasons, from 1968 to 1980, Jack starred as Detective Stephen McGarrett.  McGarrett was chosen by the Governor to preside over the fictional criminal investigation department in Honolulu, Hawaii.

Hawaii Five-O was one of American TV's longest running crime shows.  It's 12 seasons consist of  278 episodes.  The series was filmed on location in the Hawaiian islands, making it the first U.S. TV series based in Hawaii.

Detective Danny "Danno" Williams, played by James MacArthur, was Steve McGarrett's sidekick. Episodes of Hawaii Five-O often ended with McGarrett uttering the popular catch phrase "Book'em, Danno."  MacArthur left his role a year before the show's final season because as he explained on his website, "Quite frankly, I grew bored.  The stories became more bland and predictable and presented less and less challenge to me as an actor."

Below is a 1968 publicity photo of Jack MacArthur from the premiere of Hawaii Five-O. 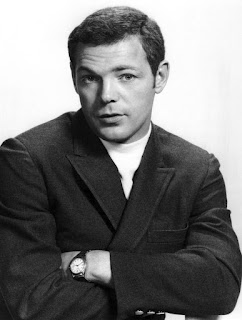 Jack Lord's  last TV appearance  was in an unsuccessful 1980 pilot for a CBS series called M Station: Hawaii.  After that, he stayed out of the spotlight.  He spent much of his time painting from his 'studio" in the corner of his bedroom in a third storey suite at the Kahala Apartments in Honolulu, were he had a magnificent view of the Pacific to inspire him.

Jack Lord was married twice.  His first wife was Ann Cicely Willard.  According to Ann's family tree on Genearnet, the couple wed in 1944 and divorced in 1947.  It was not a happy marriage, especially due the fact that Jack was away so often during World War II.

Jack and Ann had a son, John Joseph Ryan Jr., born December 1, 1942.  Jack only saw his son once, as an infant.  On October 24, 1955, the boy died of virus hepatitis at the age of 12.  Jack only learned of his son's death when his ex-wife sent him a copy of their son's death certificate.

Jack was still serving in the Merchant Marine when he met his his second wife, Marie DeNarde. While visiting his brother Bill in Woodstock, New York, Jack went house hunting and discovered  a stone house that he wanted to purchase.  The home was owned by his future spouse, Marie, who told Jack that she didn't want to sell it.  They eventually became romantically involved.

Marie was born August 16, 1905 in St.. Louis, Missouri, the daughter of Italian immigrants, She had studied fashion design and art in Paris and had moved to New York to pursue a career in her chosen field.

On January 17, 1949, Jack wed Marie.  At the time of their marriage, Jack was a struggling actor, trying to make a name for himself.  As was common at the time, Marie gave up her own career in the fashion industry so that she could support Jack's career.
The couple stayed in Honolulu after Hawaii Five-0 ended its run in 1980.  They remained together for almost 50 years, until Jack's death in 1998.  Marie was an excellent cook.  Her kitchen in Honolulu featured pumpkin-coloured cabinets and she enjoyed planning dinner parties, albeit small, intimate gathering with close friends.

For at least seven years before his death, Jack suffered from Alzheimer's Disease.  He died of congestive heart failure at his home in Honolulu, Hawaii on January 21, 1998.  He was 77 years old at the time of his passing.

* Jack Lord could not bill himself as "Jack Ryan" because a "Jack Ryan" was already registered with the actor's guild.

* Jack widow, Marie, was fifteen years his senior.  She passed away on October 13, 2005 at her home in Honolulu.  She was 100 years old at the time of her death,  When Marie died, Jack's entire estate was donated to Hawaiian charities.

* Jack was the first actor to portray the Felix Lester in the James Bond film series.  The character was introduced in the first Bond film, 1962's Dr. No.

* James MacArthur, who played Danno on Hawaii Five-O, was the the son of playwright Charles MacArthur and legendary stage actress Helen Hayes.  MacArthur died on October 28, 2010 of natural causes.  He was 72 at the time of his passing.