Whatever happened to Robbie Rist (Oliver from The Brady Bunch)? 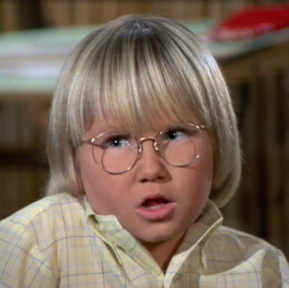 "When I got The Brady Bunch, I had already logged three or four years in entertainment, and I was more of a Six Million Dollar Man guy.  To me, it was just another job.  It only got weird after it went into syndication, when it was on three to four times a day.  That's when there were some TV-obsessed kids who probably caught every episode multiple times.  So now it's this cultural touchstone that everyone shares.  It's pretty amazing."
- Robbie Rist.
Interview with Katherine Butler for Snakkle (www.snakkle.com), Circa 2011)

Do you remember Cousin Oliver (Robbie Rist) from The Brady Bunch?  He was the kid with a Dutch Boy haircut.  His had long blond locks with long bangs, and he wore round wire-framed spectacles.  He rather resembled a much younger version of the late John Denver.
Robert Anthony "Robbie" Rist was born on April 4, 1964 in Woodland Hills, Los Angeles, California. Robbie is an actor, voice artist, singer and musician.  Although he is best known for his portrayal of Oliver on The Brady Bunch,, he only appeared in the last six episodes of the show's fifth and final season.  Nevertheless, his character made  an impact and his character is still remembered, although not always fondly.
Living in Los Angeles made it easier for Robbie to break into acting as a child.  His parents were disciplinarians, but they gave him the support he needed after making his first few commercials..  "My parents are very old-school German immigrants. who have this small town work ethic thing," he told LegendaryRockInterviews.com.
In the early days of his career, Robbie starred in a number of TV commercials.  He also appeared on John Denver's TV show and  worked with Jonathan Winters.  Prior to his stint as Cousin Oliver, Robbie guest-starred in a segment of a 1972 episode of Love, American Style.  He also appeared as Jeff in a 1974 episode of  Emergency!, a series about a Los Angeles County Fire Department crew.  The episode is entitled "Insomnia" (Season 3, Episode 8, Air Date: November 10, 1973).
In 1974, Robbie Rist was introduced to Brady Bunch viewers in an episode entitled "Welcome Aboard" (Season 5. Episode 17 Air Date: January 25, 1974).  Rist portrayed Oliver Tyler, Carol Brady's eight-year-old nephew (Robbie was actually nine at the time).  Oliver was the son of Carol's brother, Jack Tyler.  It was explained that Jack and his wife Pauline were travelling to a archeological excavation in South America.  Since Oliver was unable to accompany them, he was sent to live with the Brady family.
Cousin Oliver's first episode did not provide a favourable impression of the new character.  He made an effort to help out around the house, but only succeeded in creating more chaos.  Immediately after his arrival at the Brady home, Oliver caused a string of accidents.  He became convinced that he was a jinx.  He wasn't able to save the show either.  The Brady Bunch was cancelled by ABC at the end of the season.  Many fans blamed addition of Oliver for the cancellation of the series.  According to BestLife, the character was "instantly loathed."  Many fans considered him an intrusion.  They felt that he upset the balance of the show.
In a 2017 article, the staff of MeTV defended Robbie Rist's portrayal of Cousin Oliver.  They described the child actor as "cute, curious and a little clumsy at times - a lively edition a lively edition to a cast of incredibly seasoned child actors.  They placed the blame for Cousin Oliver's unpopularity clearly on the writers.  They wrote: "If anyone is to blame for Oliver's part on the show, it's the writers.  They underestimated Rist's talents and made the character into a caricature. After all, the six main Brady children are never written to be stupid, they're depicted as children learning lessons from challenging experiences."
You may wonder why Robbie Rist was added to the cast when there were already six Brady children.  The answer is that the Brady kids were getting older.  They were all twelve and  over and the show was losing its appeal.  As the series entered its fourth and fifth season, it faced strong competition from The Partridge Family and Sanford and Son.  Its popularity was on the wane. Something had to be done to boost its sagging ratings.  The solution: Add a cute little boy to the mix.  This tactic became known as "Cousin Oliver Syndrome," a term used to describe a show nearing the end of road.
When The Partridge Family faced the same predicament as The Brady Bunch, it added Ricky Segall to the cast as Ricky Stevens, a precocious four-year-old neighbour.  That didn't work either as The Partridge Family was also cancelled.
Robbie believes that the term "Cousin Oliver Syndrome" was coined on a website called "Jump the Shark," named after an episode of Happy Days in which Fonzie had to jump over a shark tank, a sign that the show was running out of steam.  There was a page on the site called "New Kid in Town," and it was all about all the kids who were brought into television shows in order to freshen them up.
Robbie doesn't think Cousin Oliver caused the cancellation of The Brady Bunch.  According to him, "the series was over after Hawaii (the episodes in which the Brady family vacationed in the Aloha State).  It was just a dinosaur that was too stupid to find its tar pit.  It went out with a whimper.  They just didn't renew.  There was no final episode."
After The Brady Bunch left the air, Robbie appeared in episodes of  numerous TV shows such as Lucas Tanner (1974), Petrocelli (1975, Medical Center (1975), Lou Grant (1978). and Trapper John (1979).  He played Andrew in three 1976 episodes of The Bionic Woman.  He also portrayed Little John Martin in 13 1976 episodes of the comedy/fantasy series Big John, Little John.  From 1976 to 1977, Robbie had a role in the seventh and final season of The Mary Tyler Moore Show He played David Baxter, the adopted child of anchorman Ted Baxter and his long-suffering wife Georgette.
From 1978 to 1982, Robbie appeared in three episodes of the police drama CHiPS.  In the 1980s, Robbie guest-starred in episodes of Galactica 1980 (1980), Simon & Simon (1981) and Knight Rider (1985) and The Love Boat (1986).
Below is a photo of Robbie as Terry McDaniels in a 1981 episode of of the crime drama Simon & Simon

Despite his Oliver character's infamy, Robbie Rist has had a successful career in many ways.  He is an accomplished voice artist.  Robbie does voice work for animated films and television shows, as well as for video games.  He provided the voice of Michelangelo in the Teenage Mutant Ninja Turtles film series.  From 1984 to 1985, he starred as the voice of Whiz in the Saturday morning cartoon Kidd Video.  From 2012 to 2020, he voiced Stuffy in 143 episodes of  Doc McStuffins, a Disney Junior animated show.
Robbie is also a talented musician and music producer.  He sings and plays several instruments, including guitar and drums.  Through the years, he has performed with a number of Los Angeles rock bands, including Wonderboy, The Andersons, Cockeyed Ghost and Nice Guy Eddie.  He is currently the drummer for the band Your Favorite Trainwreck, along with Jeff Caudill, Popeye V.  and Jeff Holmes.
Below is a photo of Your Favorite Trainwreck.  Robbie is pictured second from the left. 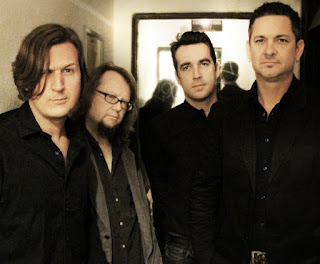 ,
In November of 2018, Robbie and his longtime girlfriend, Alison "Ali" Riseling Thomas, announced their engagement.  Ali is a fitness trainer and a certified holistic and life coach for Sparkling Soul Wellness.  The Tulsa, Oklahoma native has also made acting appearances on such shows as Extreme Measures, American Housewife and Veronica  Mars.  In addition, she is a ceramic artist.  According to a 2019 biographical article by Joey Jordan, the couple met at a restaurant in Los Angeles and  "are planning to tie the knot in the near future."
END NOTES
* Robbie Rist has a weekly comedic talk podcast called "The Spoon" with Chris Jackson and Thom Bowers on New Dissident Radio.  Here is how the podcast is described on podcastaddict.com: "In their quest to understand this insane world and the people who inhabit it, hosts Robbie Rist, Chris Jackson, and Thom Bowers stir up silly discussions on serious topics (and vice versa), hopping through conversational hyperlinks like a trio of cats playing with a laser pointer."
* Robbie appeared as a pinball player in the final episode of the sitcom One Day at a Time (Season 9, Episode 22, Air Date: May 28, 1984).  The episode is entitled "Another Man's Shoes."
*Robbie did not appear in any of the Brady Bunch TV movies.  In 2001, however, he did appear with members cast in a special reunion charity episode of the game show The Weakest Link.  While introducing himself, he said in jest, "I hope I don't kill this show too.."  He turned out to be the "weakest link" of the episode and was eliminated by the other contestants.
* Robbie has promoted The Brady Bunch on MeTV..  He has spoken in support of a cause - The Oliver Preservation Association (OPA).
SOURCES:  Snakkle (www.snakkle.com, Interview with Katherine Butler, Circa 2011; Showbiz CheatSheat, 'The Brady Bunch': 1 Character Was So Hatted He Inspired a Notorious Industry Term," by Stuart Walker, December 16, 2020; MeTV, "In defense of Cousin Oliver On "The Brady Bunch'," by MeTV Staff;  June 12, 2017; WTOP, "Success cures 'Cousin Oliver Syndrome' for Robbie Rist," by WTOP Staff, December 17, 2012; ArticleBio, Robbie Rist Biography, by Joey Jordan, October Wikipedia; Internet Movie Database (IMDb)
- Joanne
Posted by Joanne at 10:31 AM