You wanted to know about . . . Neil J. Schwartz, ("Bag" Zombroski on Happy Days)

TV Banter reader Mark C. wanted to know about Neil J. Schwartz, who played the recurring role of  Bag Zombroski in nine episodes of  Happy Days,  from 1974 to 1977.

In 1966, Neil performed in an episode of Perry Como's Kraft Music Hall.  In 1968, Neil made an uncredited appearance on The Carol Burnett Show as Chubby.

In the second season of All in the Family, Neil delivered a very funny performance as Levy, an Orthodox Jewish repairman who argues with Archie Bunker (Carroll O'Connor).  The episode is entitled "The Man in the Street" (Season 2, Episode 11, December 4, 1971).  The versatile actor also portrayed a cook in the war drama Fireball, a 1972 television movie (Air Date: March 5, 1972).

Prior to Happy Days, Neil appeared in a segment of a 1972 episode of Love, American Style entitled "Love and the Heavy Set."   He followed that up with guest roles in episodes of Medical Center (1973), The Secrets of Isis (1975), a live-action Saturday morning superhero series, and Barney Miller (1976).

As a recurring character on Happy Days, "Bag" was the leader of a social club for pranksters called the Demons.  The character first appeared in an episode of the show entitled  "Deadly Dares" (Season 1, Episode 6, Air Date: February 19, 1974).  In the episode, Richie (Ron Howard) and Potsie (Anson Williams) enlist Fonze's (Henry Winkler)  help to join the Demons.

Bag never became more than a minor character on the show.  He was dark-haired .jowly and heavy-set.  At times, he and Richie Cunningham were friends.  At other times, they were adversaries,  During the first season, he was a drummer in Richie's band.  During the show's second season, ratings began to fall, causing its creator, Gary Marshall, to shine the spotlight on Fonzie, who had previously been a minor character.  Winkler's Fonzie character became a sensation and the focus on him caused the show to be a real hit.  Anson Williams' Potsie Weber and Donny Most's Ralph Malph also remained major characters.  Bag Zombroski somehow got lost in the shuffle and never became a major character.  His final appearance is in an episode entitled "The Book of Records" (Season 4, Episode 14, Air Date: January 18, 1977).

Below is a photo of Neil as Bag Zombroski on Happy Days. 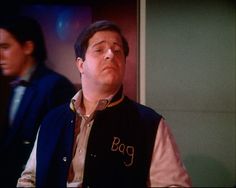 After his stint on Happy Days, Neil made few screen appearances.  In 1977,  he guess-starred as Harold in an episode of What's Happening!!, a TV comedy about a trio of inner city black youths.  The episode is entitled "One Strike and You're Out" (Season 2, Episode 11, Air Date: December 8, 1977).

Neil played the role of role of "Young Man" in a 1983 six-episode TV adaptation of Bruce Jay Friedman's play, Steambath, on the cable network Showtime.  Neil's last screen appearance of note was in the 1983 film remake of To Be or Not to Be, produced by Mel Brooks.  He retired from acting in the mid-1980s and has been  involved in the real estate business since 1986..  He has enjoyed a highly successful career as a realtor in Nevada and Southern California.  He and his wife, Ronnie, are active in the Greater Las Vegas Association of Realtors. (GLVAR).

Below is a photo of Neil and his wife, Ronnie. 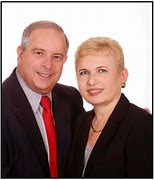 Mark C. also wanted to know why Bag Zombroski was replaced as the drummer of Richie's band in Season 3 of Happy Days.

* Richie's band didn't seem to have a name.  Bag Zombroski was the original drummer and Potsie was the lead singer.  In an episode entitled "Fonzie's New Friend" (Season 3, Episode 12, Air Date: November 25, 1975). Fonzie becomes friends with Bill "Sticks" Downey (John-Anthony Bailey), a new youth in the neighbourhood.  Fonzie hires Sticks to play drums with the band at Riche's Hawaiian-themed party.  However, 1950s racism rears its ugly head when many refuse to attend the party when they learn that Sticks is Black.

Unfortunately, I have never viewed "Fonzie's New Friend."  I checked it out on IMDb and Neil J. Schwartz as Bag Zombroski is included as part of the cast in that episode (It was his second last appearance on the show). There may have been a reason why Bag was not able to play with Richie's band at the Hawaiian party.  If anyone out there remembers the episode, perhaps you can enlighten us.

John-Anthony Bailey appeared as Sticks for a second and final time on Happy Days in an episode called "Fonzie the Superstar" (Season 3, Episode 19, Air Date: January 27. 1976), in which Richie asks Fonzie to be their lead singer at Arnold's restaurant when Potsie can't make the Senior High Dance.

John-Anthony Bailey, also known as Jack Baker, died of bladder cancer on November 13, 1994.  He was 47 years old at the time of his passing.