Keeping up with John Davidson 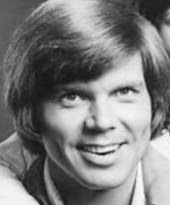 "They don't come any nicer than John Davidson.  The dark-haired, Pittsburgh-born singer/TV personality . . .  is highly defined and sometimes cursed by his clean-cut, fresh-faced, apple-cheeked handsomeness."
- Internet Movie Data Base (IMDb) biography, by Gary Brumburgh
John Davidson certainly fit the definition of handsome, with his engaging smile, his dimples, his perfectly-coiffed hair and his baritone voice.  John was even voted "best looking" in his high school yearbook.  Yet he has built his career on far more than just a handsome face.  He has always been a consummate entertainer and he has taken on some difficult dramatic roles.
From the late 1960s to the early 1990a, John was a fixture on American television.  He was ubiquitous
as an actor, singer, game show personality and host.  He showed up everywhere on North American TV screens,  A frequent guest on the original Hollywood Squares with Peter Marshall, John also hosted variety shows and made guest appearances on a number of popular comedies and dramas.

John Hamilton Davidson was born on December 13, 1941, in Pittsburgh, Pennsylvania. the son of two ordained Baptist ministers. John's father, Rev. Dr. James Allie Davidson was minister at Knoxville Baptist Church in Pittsburgh from 1934 until 1940.  Dr. Davidson met his wife, Elizabeth Peck of Pittsburgh, when they were at the Newton Seminary in Boston.  They married in 1933.  In addition to John, they had three other sons: David Beck (born 1937), Porter (born 1938) and William Lee (born 1950).  Porter passed away in 1967.

Although John was born in Pittsburgh, he lived in Brocton, Massachusetts from age two to age 14.  The Davidson family eventually moved to White Plains, New York, where John's father served at the First Baptist Church of White Plains for 17 years.  In 1959, John graduated from White Plains High School.  He then earned a B.A in theatre arts from Denison University, a private liberal arts college in Granville, Ohio.  He majored in theatre arts because he thought it would help him become a minister like his parents.  However, John soon decided that preaching was not for him.  He realized that he enjoyed theatre but did not wish to get involved with organized religion.  He preferred to sing about love, not preach it.  So, he did some summer stock and went to New York City to launch a career in show business.  In 1964, he made his Broadway debut in a production of Foxy, starring Burt Lahr.

In a 2011 interview with Greg Palmer, John explained how he first became involved the entertainment business.  "With my theatre arts college degree in hand, I headed for Broadway after doing three seasons of summer stock.  Bob Banner, the TV producer found me in a Broadway show and molded my career.  He advised that I be a pitchfork rather than a spear.  He helped me develop myself into a multifaced performer.  That has been my survival."

Bob Banner, who co-produced The Carol Burnett Show from 1967 to 1972, cast John Davidson.in his television debut in The Fantasticks.  John played Matt in the 1964 Hallmark of Fame TV version of that musical.  During the 1960s, the busy entertainer hosted his own daytime talk show, many beauty pageants and the Kraft Summer Music Hall, a 1966 comedy music variety show  which featured regulars Flip Wilson, George Carlin and Richard Pryor.  In 1967, he  appeared in an episode of the first season of The Carol Burnett Show.

During the early1970s, John guest-starred in several popular television shows.  Most notably, he appeared in episodes of The Interns (1971), The F.B.I. (1972), Owen Marshall, Counselor at Law (1972) and Here's Lucy (1973).  In the Here's Lucy episode, "Lucy and the Professor" (Season 5, Episode 19, Air Date: January 29, 1973), John portrayed Professor John Kleindorf.  In the episode. Lucy's daughter Kim, played by her real life-daughter Lucie Arnaz, dates the young professor.  Lucy, however, mistakenly believes that the professor is an old man and makes a date with him herself to prove that he is a two-timer.

From 1973 to 1974. John co-starred with Sally Field in the short-lived fantasy sitcom The Girl with Something Extra.  The series aired on NBC for one season (22 episodes).  It was about the misadventures of a newly married couple named John and Sally Burton.  John Burton, portrayed by Davidson, discovered that his wife, played by Sally Field, had the power to read people's mind, also known as ESP..

Although The Girl with Something Extra, aired right after the popular Sanford and Son, it never caught on with viewers.  It was cancelled after its first season due to low ratings.

Below is a publicity photo of John Davidson and Sally Field for The Girl with Something Extra. 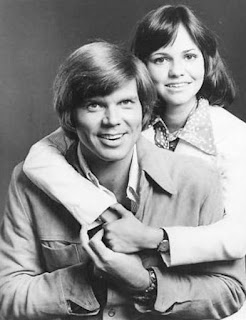 John Davidson proved that he could take on challenging dramatic roles.  He received favorable reviews for his performance in a 1974 episode of The Streets of San Francisco entitled "Mask of Death" (Season 3, Episode 4, Air Date: October 3, 1974).  He played professional female impersonator Ken Scott, who suffered from mental illness.

In the late 1970s, John served as one of four guest hosts, along with Joey Bishop, McLean Stevenson and Joan Rivers, on The Tonight Show Starring Johnny Carson.  In fact, he filled in for Johnny over 80 times.

From 1980 to 1984, John Davidson was one of the three hosts of the realty show That's Incredible!.  The other hosts were Fran Tarkenton and Cathy Lee Crosby.  That's Incredible! was similar to Ripley's Believe it or Not.  It featured people performing stunts or displaying rare talents, as well as scientific or technological innovations. There were also reenactments of reportedly paranormal happenings.  At the end of an especially amazing segment of the show, the host would utter the catchphrase "That's incredible!"

Below is a photo from Left to Right:  Fran Tarkenton, Cathy Lee Crosby and John Davidson as hosts of That's Incredible! 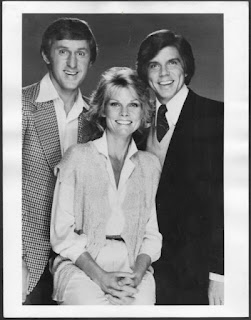 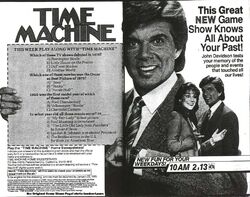 John Davidson has been married twice.  On December 29, 1968, he wed singer-actress Jackie Miller.  Jackie was an original member of The New Christy Minstrels and she was once part of a  female folk duo called Jackie and Gayle.  Her partner, Gale Caldwell, was also a former member of The New Christy Minstrels.  Jackie is known for her role as Toby Carr in the 1965 film Wild on the Beach.  Her credits also include a an appearance in a 1964 episode of the George Burns TV comedy Wendy and Me.  She and Gayle performed on The Red Skelton Hour in 1965 and 1966.

John and Jackie had two children, a son called John Davidson, Jr. and a daughter, Jennifer Davidson.  Jennifer became a professional figure skater and John Davidson, Jr. became an entrepreneur.  He is also speaks to other entrepreneurs about his program which his website describes as "getting back the freedom, confidence and earning power lost by all the financial trapping of success."

John and Jackie divorced in 1982 and John married second wife Rhonda Rivera on December 10, 1983.  John first met Rhonda while doing his 1969 daytime talk show, The John Davidson Show.  Rhonda was a member of Blush, his back-up trio of women. The two have been married for 38 years and they have a have a daughter, Ashleigh Davidson.

As John Davidson approaches his 80th birthday in December, he still takes delight in his music and he is still a troubadour. Music has always been his passion and he plays the guitar and the banjo. He has never had a No. 1 single and he says he enjoys performing in front on an audience rather than working in a recording studio.

John sings in English, French and Spanish.  He and Rhonda wanted to experience what it would be like living outside the United States.  So, when John turned 60, the couple moved to San Miguel de Allende, Mexico, where they lived for six years.  While in Mexico, John studied Spanish and learned several Spanish love songs.

John and Rhonda returned to the United States and currently reside in the Lakes Region of New Hampshire.  In a 2020 article in New Hampshire magazine, John wrote the following about how much he enjoyed living in the Granite State: "Pine trees everywhere.  Snow: I'd rather be cold than hot and sticky in Florida.  Cold makes me want to jump up and down.  I love jumping up and down.  Beautiful homes at amazing prices.  And even more, my feeling that in New Hampshire there is a sense of individualism, self-reliance and, yes, healthy skepticism.  Being a progressive, I of course, came here in search of other progressive liberals, but I've also encountered open-minded conservatives who have been an inspiration."

John Davidson still has a head of thick hair, although it is silvery white now.  He continues to do what he enjoys most - performing,  In 2016, John was asked to provide some advice "for young musicians struggling to get their music heard in these tough times.  He replied, "I'm still trying to figure it all out myself.  But I know that nothing beats performing again and again anywhere, for anyone, street corners, friends, family.  Sing at the drop of a hat, even if you have to drop the hat."

Does John have any plans to retire?  "I don't think I'll ever retire," he told the Palm Beach Post in 2013.  "I can't think of anything I'd rather be doing.  I love performing.  I love the act of singing, the act of breathing correctly.  It's a physical workout.  Singing feels good in my head, and I love being a story-teller."

* On the night of May 28, 1977, John Davidson was was the headline performer at the Beverly Hills Supper Club in Southgate, Kentucky. A fire broke out and raged through the club.  165 people lost their lives.  Fortunately, John was not physically injured.

* John is known for his roles in Disney movies such as The Happiest Millionaire (1967), starring Fred MacMurray and The One and Only, Genuine, Original Family Band (1968), starring Buddy Ebsen, Walter Brennan and Lesley Ann Warren.

* John's father, Rev. Dr. James A. Davidson died of cancer in Los Angles in 1984.  He was 75 years old at the time of his passing.  It's interesting to note that Dr. Davidson officiated at the weddings of many celebrities, including his son John's and those of Kenny Rogers and Dick Clark.

EDITOR'S UPDATE (May 28, 2021): I received an email this week from a TV Banter reader in Ottawa, Canada, who shared her memories of John Davidson.  Here is the email:

I read your blog on John Davidson a few weeks ago.  It brought back memories.  I used to have a big crush on him!  I was looking through my scrapbook today and found the info about the show I had seen him in at Ottawa Exhibition in August 1969.  Wow, so long ago!  He was the opening act for Art Linkletter.  Can you imagine?  As I wrote in my scrapbook, I was one of the lucky ones.  Mt girlfriend and I went backstage and he gave me his autograph.  The price of the tickets for the show at that time:  $2.50, 1.50 and 1.00.