Happy Days: How and why Chuck Cunningham vanished 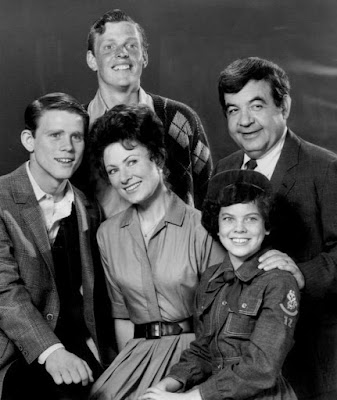 Happy Days fans will remember that that there was a third Cunningham sibling named Chuck.  Chuck was the older brother of Richie (Ron Howard) and Joanie (Erin Moran).  He can be described as a basketball-dribbling, sandwich-eating jock.  Chuck" didn't have many speaking parts.  By the middle of the first season, he was written out of the script and sent off to college, never returning to the screen again.

Two actors played Chuck Cunningham during the course of the show. The original Chuck was Gavan O'Herlihy.  According IMDb, Gavan played Chuck in seven episodes, from January to March, 19, 1974.

Gavan was born on April 29, 1954, in Dublin Ireland,.  He is the son of Irish actor Dan O'Herlihy and his wife Elsa Bennett, a native of Sandymount, Ireland.  Gavan split his childhood between Dublin and Los Angeles.  He was a skilled tennis player in his youth and became the Irish National Tennis Champion.  While attending Trinity College in Dublin. Gavin took up acting and relocated to Los Angles when he was cast as Chuck in 1973.

It seems that Gavan O'Herlihy was not very happy on Happy Days and he asked to leave the show.  Here's how he explained his departure in an email interview with OnMilwaukee:  "I hung around for a half season, then asked out of the contract.  It wasn't my cup of tea.  It raised some eyebrows, but I'm glad I did."  Gavan has explained that Happy Days gave him his big break in acting, but his charater, Chuck, had a limited role, dropping in from college from time to time.  This did not satisfy him and he wanted to go on to other work.
After Happy Days, Gavan O'Herlihy played the role of Phil McGee in the acclaimed 1976 American miniseries Rich Man, Poor Man, starring Peter Strauss, Nick Nolte and Susan Blakely.  In the 1970s, he appeared in episodes of a number of American television series such as Lucas Tanner, (1975), Marcus Welby, M.D. (1975), The Six Million Dollar Man, Police Woman (1975), The Bionic Woman (1978).
Gavan also portrayed a brutal killer named Dan Suggs in the 1989 TV mini-series Lonesome Dove, but he did not want to be stuck in television roles.  He preferred motion pictures.  He played the role of Airk Thaughbae, a warrior, in the 1988 George Lucas-produced film Willows.  Willows, a dark fantasy, was directed by Gavan's Happy Days kid brother, Ron Howard.
In 1980, Gavan moved to England and was cast in the series We'll Meet Again.  It was a hit and Gavan bought a houseboat and lived along the Thames River.  In the 1990s, Gavan permanently relocated to the UK, where he worked in theatre and on television and for a time, he moved into a lighthouse in Wales.
Gava O'Herlihy eventually settled on a farm in the Cotswolds, a range of rolling hills in the English countryside, where he has resided for over 30 years.  He has two children, a daughter, Misty and a son, Rogan.  Gavan has had roles in British television series such as Sharpe (1993), Jonathan Creek (1998) and Midsomer Murders (2009).  He is known to British audience as the dashing Captain Leroy, the heroic British officer in Sharpe, a departure from his villainous or hostile screen roles in such films as Never Say Never Again (1983), a spy movie starring Sean Connery, Superman III (1983), in which he played Clark Kent's rival, and The Last Outlaw, a 1993 Western..

* In 2009, Gavan returned to motion pictures as Sheriff Vaines in Descent 2, the sequel to Neil Marshall cult horror film.  He plays the leading role of writer John Anderson in Queen of the Redwood Mountains, a Nic Saunders film set to be released this year.

After the exit of Gavan O'Herlihy, Randolph Roberts became the second actor to portray Chuck Cunningham.  He was brought in briefly until the producers decided to abandon the character, reportedly because he was never a major character and they noticed that Fonzie (Henry Winkler) had become a big brother to Richie.

In the episode "Richie Moves Out," Richie goes to live at Chuck's apartment, but the arrangement doesn't work out very well.  In the episode "Guess Who's Coming to Christmas," the Cunninghams are all prepared for Christmas, until Richie learns that Fonzie will be spending the holiday alone.  Randolph Roberts played Chuck in that episode.  However, the character never appeared again, although he was mentioned in a few other episodes, the last one being "Fish and the Fins." (Season 2, Episode 20, Air Date: March 11, 1975).  After that, Chuck was written entirely off the show, as if he never existed.  In later episodes, the Cunningham family was depicted aa having two siblings, with Richie being the eldest.  No explanation was given for Chuck's absence.  This led to the term "Chuck Cunningham Syndrome,"

According to several websites, Happy Days creator, Gary Marshall, joked that Chuck won a basketball scholarship to Outer Mongolia.  On the website ShowBiz CheatSheet, Marshall is quoted as saying, "You gotta pay attention to what's happening.  It soon became obvious that Fonzie was the older brother and that was the relationship that was working."  Marshall's plan to get rid of Chuck was apparently to do nothing.  "So, I just said let's just have Chuck disappear and let's see how much mail we get.  We didn't get much."

Below is a 1974 Happy Days publicity photo with Randolph Roberts (standing with Marion Ross) as Chuck Cunningham.from the episode "Guess Who's Coming to Christmas." 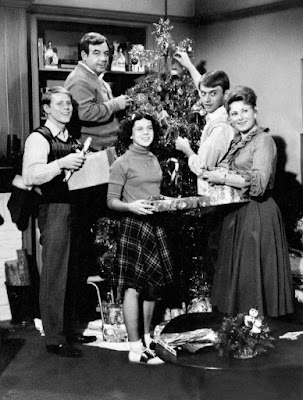 Prior to Happy Days, Randolph Roberts starred as Jason Grant in the 1973 horror thriller Wicked, Wicked, which is described on IMDb as a "tougue-in-cheek" psycho drrama."  He also appeared in two episodes of Gunsmoke - "The Widowmaker" (1973) and "The Colonel" (1974).  After his departure from Happy Days, he guest-starred on episodes of City of Angels (1976), Barnaby Jones (1978), Police Woman (1978), The A-Team (1984).  He also had roles in such TV movies as Who Is the Black Dahlia? (1975), The Return of Captain Nemo (1978), Samurai (1979) and Police Woman: Confessions of a Lady Cop (1980).
Randolph played the 2nd Sanctuary Man in the 1976 full length film Logan's Run.  His last acting role on screen was minor role in Say Yes, a 1986 film comedy in which he portrayed a soldier on a bus.  Randolph Roberts retired from his acting career about 1986 and served as an education supervisor for ITT Technical Institute in San Diego, California.

An intriguing question is whether whether Happy Days would have gotten rid of the Chuck Cunningham character so hastily if Gavan O'Herlihy had remained in the role?  We'll never know the answer to that question for sure.  However, if Gavan had remained on Happy Days for the duration of the show, he wouldn't have had the stellar career that he's had.  Happy Days ran until 1984.

* There was actually a third Chuck Cunningham.  played by Ric Carrott.  Carrrott originated the role of Chuck in the pilot for Happy Days, which aired as a segment of Love American Style entitled "Love and the Happy Days" (Season 3, Episode 22, Air Date: February 25, 1972).  The segment was about a 1950s family that gets its first television.  Son Richie (Ron Howard) and his friend Potsie (Anson Williams) assume that the TV can be used to attract girls.  Marion Ross also appeared in the episode as Marion Cunningham.

Ric Carrott auditioned for the part of Chuck Cunningham in the series, but it was given to Gavan O'Herlihy.

EDITOR'S UPDATE (Saturday November 12, 2021):  Gavan O'Herlihy, the original Chuck Cunningham, has died at the age of 70.  According to Variety, Gavan's brother, Cormac O'Herlihy, stated that the actor passed away in Bath, England on September 15, 2021.  The cause of death was not disclosed, but Gavan's brother confirmed that it was not COVID-19.