A Look Back at The Jetsons: How accurate was its vision of the future?

"It’s easy for some people to dismiss “The Jetsons” as just a TV show, and a lowly cartoon at that. But this little show—for better and for worse—has had a profound impact on the way that Americans think and talk about the future."

Those old Hanna-Barbera cartoons of the 1960s are quite enjoyable, even in today's world of computer-generated animation.  A case in point is The Jetsons, about a futuristic space age family.  The Jetsons was the flip side of The Flinstones, another Hanna-Barbera-produced animated series that took place in the "modern stone age."  Who can forget the catchy ditty that was The Jetsons' opening theme?  Remember . . .

The Jetsons originally ran in prime time for just one season on ABC, from September 23, 1962 to March 17, 1963.  It lasted 24 episodes before it was cancelled.  After cancellation, its syndicated reruns were shown as part of the Saturday morning cartoon lineup.  The show gained a whole new audience on Saturday mornings and proved to be quite popular.  Fresh episodes were produced in 1985 and 1987, increasing the number of episodes to 75.

The Jetsons is set in an ultramodern world circa 2062 (one hundred years from its original broadcast date of 1962).  The Jetsons resided in the Skypad Apartments in Orbit city.  The family consisted of George Jetson, his wife, Jane, and their two children, Judy and Elroy.  They had a robot maid named Rosey, who handled menial household chores.  They also had a dog named Astro, who was George Jetson's beloved pet and Elroy's loyal companion.  Astro even had a catchphrase.  It was "Ruh-Roh, Reorge!" (Translation: "Uh-Oh, George!).

George Jetson, originally voiced by actor George O'Hanlon, (1912-1989), was employed by Spacely's Sprokets Inc., owned by Cosmos Spacely (voiced by Mel Blanc in the TV series).  George commuted to work in an atomic-powered bubble.  His job title was "digital index operator."  He only worked about three hours a day for three days a week.  He literally pushed buttons on and off. Yet, in a 1980s episode, George complains about his heavy work load.
Cosmos G. Spacely, originally voiced by Mel Blanc (1908-1989), who provided the voice of Bugs Bunny.  Mr. Spacely was a stereotypically harsh boss, always screaming at George at the top of his lungs, complaining about George's work performance.  He often fired George in a fit of wrath, but always hired him back.  Spacely was a short, quick-tempered man with thinning hair and a toothbrush moustache.
Jane Jetson, voiced by actress Penny Singleton (1908-2003) in the TV series, was George's wife.  Jane was a homemaker.  She shopped at Mooning Dales and she was interested in fashion and new gadgetry.  Jane was a member of the Galaxy Women Historical Society and was a fan of Leonardo de Venus and Picasso Pia.  Although she had a robot maid and automated apartment appliances, she sometimes tired from pushing buttons and needed to take a vacation.  Jane was not afraid to stand up to George's boss, Mr. Spacely, when he irritated George.
Judy Jetson, voiced by Janet Waldo (1920-2016), in the TV series, was a typical futuristic teenage girl with futuristic tastes in clothes.  She enjoyed chatting on the phone and shopping.  She had a digital diary named Didi, which can be loosely compared to Facebook, although it was a private diary..  Judy attended Orbit High School.  She had platinum blonde hair, which she wore in a ponytail on top of her head.
Elroy Jetson, voiced by Daws Butler (1916-1988) in the TV series, was an intelligent boy, very skilled
in space sciences.  The youngest of the Jetsons, Elroy was a student at Little Dipper School.
What is so intriguing about The Jetsons, especially the original 24 episodes,  is that the show provides a view of the latter half of the 21st century from an early 1960s perspective.  It is worth taking a look at the  gadgets and technology that The Jetsons envisioned for the future.  Much of it has actually come to pass.  In fact, The Jetsons was amazingly accurate in its predictions.  For example, George's work computer was called RUDI (Referential Universal Digital Indexer) in the 1980s episodes.  We now have Yahoo and Google.  We also have Siri and Alexa to answer our questions immediately.

George was able to see and speak with his boss, Mr. Spacely, and his family from his computer screen.  In 2021, less than 60 years since The Jetsons premiered, we commonly view others and chat with them via Skype and Zoom video calls.  In his home, George kept up with the news on his computer screen, an unfamiliar concept in the 1960s. 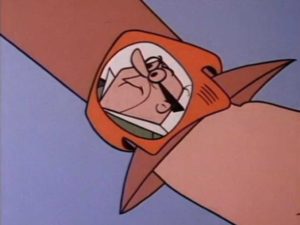 In just over 40 years, we will reach 2062, the futuristic year of The Jetsons.  Our current world is not as space-oriented as the world of The Jetsons.  We do not wear space suits or travel in flying cars and spaceships every day.  We do not commonly fly around with jet packs.  The Jetsons featured moving walkways, which are common in today's airports, but not as widespread as in the world of  The Jetsons.  Our households do not commonly have domestic robot maids such as Rosey.  However, they certainly exist and may become more popular, especially in Japan.   By 2062, they may actually be commonplace.

Rosey, the robot maid, was voiced by Jean Vander Pyl (1919-1999), who also provided the voice of Wilma Flintstone.  The Jetsons' housekeeper wore a frilly apron and she often used a separate vacuum cleaner.

The Jetsons featured drones and holographs.  In the classic introduction to the show, the Jetson children are dropped off at school via flying pods.  Although we don't yet see drones delivering people to preferred locations, they are being used increasingly for transporting packages and taking aerial photographs.  The Jetson family also had a holographic Christmas tree to ring in the festive season, although not exactly the hologram versions of entertainers seen at the Billboard Music Awards.

To me, the 24 original 1962-63 episodes are far more significant than any Jestsons shows made in the 1980s or later.  The Jetsons certainly reflects more of an early 1960s social view than a 21st century one.  Jane Jetson did not work outside the home and there were no Blacks or Asians on the original series.  However, where technology is concerned, the series was very prescient.  Its view of the feature was quite remarkable from the vantage point of the early 1960s

* The Jetsons was the first show broadcast in colour by the ABC network.  However, the original ABC show was cancelled because of the "lack of colour."  In 1962 fewer than 3 per cent of American homes had colour televion.  Since they viewed The Jetsons in black and white, they missed out on the vibrant colours of the show.

* The catchy theme song from The Jetsons was written by American composer Hoyt Curtin (1922-2000).  Curtin composed TV commercials in the 1950s and he first met William Hanna and Joseph Barbera when he worked on a beer commercial they were producing for MGM.  Curtin became the primary musical director for the animation studio.  Over the years, he wrote the music to the most well known Hanna-Barbera series including Yogi Bear, The Flintstones, Huckleberry Hound, Quick-Draw McGraw, Top Cat , Scooby Doo and The Smurfs.  An August 28, 1986 story in the Los Angeles Times states: "The quirky, jazzy "Jetsons" theme has suddenly emerged as a pop hit . . . On a given day, the 1962 tune might play between Twisted Sister and Genesis on any one of several rock 'm' roll radio stations in Los Angeles.  George and the family have an animated video on MTV.  And "The Jetsons" theme, re-recorded in stereo, recently reached No. 9 on Billboard magazines retail sales charts."

* Morey Amsterdam and Pat Carroll both filed $12,000 lawsuits against Hanna-Barbera in 1963 for breach of contract.  They contended that they had signed for the roles of George and Jane Jetson respectively.

* Hanna-Barbera produced a full length film based on the animated TV show.  It was called Jetsons: The Movie and was released in 1990.  Both George O'Hanlon and Mel Blanc died in 1989, during production of the film.  Jetsons: The Movie was distributed by Universal Pictures and did not receive positive reviews for its animation or its story.  It was the last official Jetsons production until 2017's The Jetsons & WWE: Robo Wrestlemania, a colaberation between Warner Brothers and WWE Studios.  This direct-to-video animated film had none of the original voice cast, as they had all passed away.