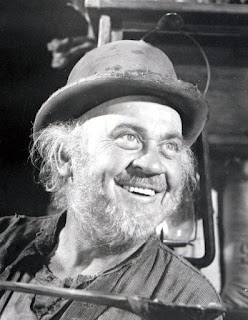 "Acting is the most embarrassing business in the world.  You never know when you're going to eat."

"I don't care about winning an Oscar.  I'm just an actor who can play parts and make people believe them."

- Dub Taylor, as quoted in Augusta.com

As filmmaker Mark Ezra Stokes said of Dub Taylor, "He pops up in everything."  Most people have seen Dub Taylor's face in movies and on television, but they don't remember his name.  Dub was never a handsome leading man, but he was a legendary character actor who made his mark on the American entertainment scene.  He often played grizzled sidekicks in Westerns,.  His career spanned decades in motion pictures and on television.  Walter Clarence Taylor, Jr., known professionally as "Dub," was born in Richmond, Virginia on February 26, 1907, the third of the five children of Walter and Minnie Taylor.  The U.S. census of 1920 recorded that Walter Jr. had two older sisters, Minnie Margaret and Maude, a younger brother, George, and a little sister named Edna.

When Dub was five years old, his family moved to Augusta, Georgia where his father, Walter Sr., worked as a cotton broker.  One of Dub's best friends In Augusta was Ty Cobb Jr. and he would sleep over at the Cobb home. Dub also spent some of his early years in Oklahoma and in South Carolina, where he attended military school in Greenville.

Dub began his show business career in vaudeville, playing the harmonica and the xylophone in New York City.  During his nearly six decades as an actor, he appeared in about 150 motions pictures, bit he never played a leading role in any major film.  His first film appearance was in the 1938 Frank Capra classic You Can't Take It With You in which he played the part of ex-football captain Ed Carmichael.  He won the role because of his ability to pay the xylophone.  In another Capra classic, 1939's Mr. Smith Goes to Washington, starring James Stewart and Jean Arthur, Dub portrayed a reporter.

Dub also originated the role of Cannonball in The Taming of the West (1939), a role he continued to playin many films.  "Cannonball" was the comic sidekick to "Wild Bill" Saunders, played by Bill Elliott.  Although Dub Taylor frequently portrayed heavyset cowboys and hillbillies, his roles were many and varied.  He was certainly a prolific TV actor.

The 1994 Law and Order episode, in which he portrayed Arthur Kopinsky was Dub Taylor's last television acting appearance.  His final film appearance was a cameo role as a hotel clerk in the film 1994 film Maverick, starring Mel Gibson, James Garner and Jodie Foster.

According to the IMDb and Family Search websites, Dub wed Florence Gertrude Heffernan wed on April 21, 1931.  They remained married until Florence's death in on October 10, 1987 at the age of 81.  The couple had two children, including a daughter, Faydean Taylor Tharp and a son, Walter Clarence Taylor III, known as "Buck.".  Buck appeared with Dub in Conagher, a 1991 Turner Network television film, a Western, starring Sam Elliott, a friend of Buck's, and Elliott's wife, Katharine Ross.

Dub Taylor died of congestive heart failure in West Lake Village, California on October 3, 1994.  He was 87 years old at the time of his passing.

* Here's how Dub Taylor explained why he is called "Dub."  As a boy, he was nicknamed "W" for Walter.  The "W" was eventually shortened to just "Dub."

* Dub portrayed Ivan Moss, the father of a gang member, in the 1967 film Bonnie and Clyde, starring Warren Beatty and Faye Dunaway (Ivan was the one who told the police where to find Bonnie and Clyde).  In Back to the Future III (1990), Dub played Levi, an old fellow in the Palace Saloon.

* Dub was an avid hunter and he often visited Mexico

* Dub was known for his trademark bowler hat.

* For six seasons (1985-1991), Dub made weekly appearances on the long-running TV country-music show, Hee Haw.  He was mostly seen in the Lulu's Truck Stop skit.

* Dub was the gravelly-voiced man in the Hubba Bubba bubblegum commercials in the early 1980s.  Dub also appeared in a 1994  "Dip Off" commercial for Pace Foods in which he and two other contestants use Pace Picante Sauce in their dips, while another competitor used a "Mexican sauce" as a secret ingredient.  Dub's character declared that the sauce was actually made in New York City.

* A feature length documentary about the life of Dub Taylor, That Guy: The Legacy of Dub Taylor, had its  premiere on April 14, 2007 at Morris Museum of Art in Atlanta, Georgia..  The documentary was directed by Mark Ezra Stokes.  According to a press release for the film, "Taylor's recurrence in popular films, without gaining notoriety among the average American moviegoer," is what fascinated Stokes about Dub.  Dub's son, Buck, and his grandchildren, Matt and Cooper, were interviewed for the film."

* Buck Taylor, born May 13, 1938 in Hollywood, California, is a veteran actor and an artist.  He is a graduate of North Hollywood High School, where he was a skilled gymnast, although he failed to qualify for the 1960 Olympics.  Buck served in the United States Navy for two years.  He creates water colour and acrylic paintings of cowboys, horses and native Americans.

From 1967 to 1975, Buck portrayed deputy Newly O'Brien on the long-running CBS series Gunsmoke.  Newly O'Brien arrived in Dodge City as a gunsmith, but later became a deputy marshal.  From 2018 to 2020, Buck has played Emmett Walsh in four episodes of the Amazon Prime series Yellowstone. The series stars Kevin Costner and it chronicles the fortunes of a ranching family in Montana.