Keeping Up with Megan Fox 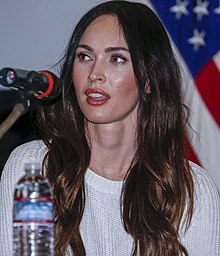 What's up with American actress and model, Megan Fox?

Megan Denise Fox was born on May 16, 1986 in Oak Ridge Tennessee and raised in Rockwood, Tennessee.  Her father, Franklin Thomas Fox, a parole officer, and her mother, Gloria Darlene (née Cisson), a real estate manager, divorced when she was just three years old.  Megan's mother eventually remarried and Megan and her sister were raised by their mother and stepfather, Tony Tonachio.

At the age of five, Megan studied dance and drama.  At 10, she moved to Port St. Lucie, Florida, where she continued her training and completed her schooling.  At 13,, Megan began modelling after receiving awards at the 1999 American Modeling and Talent Convention in Hilton Head, South Carolina.  She eventually moved to Los Angeles to pursue an acting career.

Megan made her acting debut as a spoiled heiress in the 2001 romantic comedy Holiday in the Sun. The film was released direct-to-DVD.  Although she is widely known for her 2007 role as Mikaela in the action film Transformers and its 2009 sequel, Transformers: Revenge of the Fallen.  She also starred as Jennifer in the 2009 comedy/horror film Jennifer's Body.  Although Megam is primarily regarded as a film actress, she does have some television credits.

From 2002 to 2003, Megan Fox starred as Ione Star in Ocean Ave. a low budget Swedish-American daytime soap opera.  She also appeared as Cassandra Ridgeway in  three episodes of the short-lived sitcom The Help.  From 2004 to 2006, Megan portrayed Sydney Shanowski on the ABC sitcom Hope and Faith.  From 2016 to 2017, she had the recurring role of Reagan in 15 episodes of the Fox TV comedy New Girl, starring Zooey Deschanel.

On June 24, 2010, Megan married American actor and rapper Brian Austin Green in a private ceremony at the Four Seasons Resort on the island of Maui in Hawaii.  They had three sons together: Noah Shannon Green (born 2012), Bodhi Ransom Greem (born 2014) and Journey River Green (born 2016).  Megan filed for divorce in 2015, but the couple reconciled.  However, on April 25, 2019, Megan filed for divorce a second time.

Megan and rapper, songwriter and actor Machine Gun Kelly (real name: Colson Baker) are an item right now.  They met on the set of their upcoming film, Midnight in the Switchgrass and Megan has appeared in his music videos.  On Friday, June 25, 2021, the two were spotted walking hand in hand after attending a Yungblud concert at Whisky A Go-Go in West Hollywood, California.  Last weekend, The heavily-tattooed Machine Gun held a surprise rooftop concert in Venice Beach, California.

On June 28, 2021, Megan Fox appeared on Today, NBC's morning show, to promote her latest film movie, a horror flick called Till Death.  Her three children crashed the interview, after they awakened.  They had fallen asleep on the living room sofa after watching a movie.  Megan stated that she wishes she could put her children "back into that two, three-year-old period because it's hard to watch them grow up so quickly."

* Megan admits to suffering from obsessive-compulsive disorder and low self-esteem.

* Megan has had plastic surgery.  She had a nose job because of the width of her nose profile.  She also had a cleft, a vertical dent at the front tip of her nose.

* In 2010, Megan was the victim of a gang of  criminals known as the Bling Ring or or Hollywood Hills Burglar Bunch.  They targeted her because of her prominence in the fashion industry and robbed her home for her possessions.