Keeping Up With Lesley Ann Warren 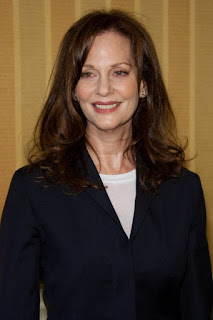 Actor Stuart Damon's recent death made me think about Lesley Ann Warren.  Although Damon was widely known for his role as Dr. Alan Quartermaine on General Hospital, he also played the Prince opposite Lesley Ann Warren in Rodgers and Hammerstein's 1965 TV musical version of Cinderella.

Lesley Ann Warren was born in New York City on August 16, 1946.  She comes from a Jewish family with some Russian, Ukrainian, Belarusian and Bulgarian ancestry.  Her New Yorker father, William Warren, was a World War II veteran and a real estate agent.  Her mother, Margot (née Verblow),  was a British-born nightclub singer.  Lesley a has younger brother named Robert Lewis Warren.  As a six-year-old, she attended the Professional Children's School.  In her early teens, she was a student at the High School of Music and Art.

Lesley started out as ballerina.  At the age of 14, she trained at the prestigious School of American Ballet in New York.  In 1963, at the age if 16, she made her Broadway debut in in 110 in the Shade.  At 17, she studied acting under Lee Strasberg at his Actors Studio in Manhattan  Lesley made an unbilled appearance as Shelley Winters' daughter in the 1962 film The Chapman Report.  She was also given a bit part in the daytime drama The Doctors.  It was her work on Broadway however, that led to her breakout role as Cinderella.  In 1963, she won Broadway's "Most Promising Newcomer" Award.  She also won the Theatre World Award in 1965 for her work as a "cat burglar" alongside Elliott Gould in the musical Drat! The Cat!, which only lasted for eight performances.

Lesley enjoyed her first major television success in the title role in Rodgers and Hammerstein's 1965 classic, Cinderella.  She and Sturt Damon were accompanied by a stellar cast, which included Walter Pidgeon and Ginger Rogers as the King and Queen, and Celeste Holm as the Fairy Godmother.

Below is a photo of Lesley Ann Warren and Stuart Damon in Cinderella.

From 1970 to 1971, Lesley Ann Warren had the recurring role of Dana Lambert in 23 episodes of Mission Impossible.  She was hired to replace Barbara Bain after Bain left the show over a contract dispute. Audiences were lukewarm in their response to her as a replacement for Bain, and she departed after only one season.  Nevertheless, Lesley was nominated for an Emmy Award for her role on Mission Impossible.

Below is a photo of Lesley with the Mission Impossible cast in 1970. 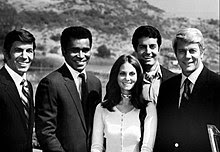 Ryan O'Neal co-starred with Lesley in the 1971 TV movie, Love Hate Love.  O'Neal who had just enjoyed box-office success in the 1970 tearjerker film, Love Story, played Russ Emery, an engineer who captures the heart of fashion model Sheila Blunden (Lesley), whose fiancé turns out to be psychotic.
Below is a photo of Lesley with Ryan O'Neal in a scene from Love Hate Love. 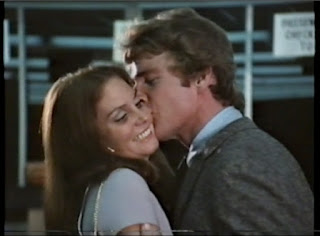 Lesley has played an impressive array of characters in television miniseries.  She received a Golden Globe Award for her 1977 performance in Harold Robbins' 79 Park Avenue, a rag-to-riches story, in which she played a madam.  Lesley won acclaim for starring role in the 1980 Civil War miniseries Beulah Land and also for her portrayal of Anna Friedman, a Polish-Jewish immigrant, in the 1985 miniseries Evergreen.  In 1990, Lesley played the role of Barbara Walker in Family of Spies, a television movie based on the espionage exploits of John  A. Walker, a cryptologist with the United States Navy on a submarine. In 1995, she co-starred with Ben Kingsley, who played Potiphar, in the Biblical miniseries, Joseph. She played Potiphar's wife.

In the 21st century, Lesley Ann Warren has been as active as ever.  From 2001 to 2006, Lesley appeared as Tina, Will Truman's father's mistress, in five episodes of Will & Grace.  She also portrayed Sophie Bremmer, Susan Mayer's mother, in seven episodes of the ABC comedy/drama Desperate Housewives (six episodes in 2005 and one in 2011),   In 2019, she co-starred in a short-lived comedy/drama TV series on Lifetime entitled American Princess.  From 2008 until 2012, Lesley played Jinx Shannon in the crime/mystery series In Plain Sight.  She also had guest spots in episodes of Losing Grace (2001), Touched by an Angel (2003)I and The Practice (2003).

Lesley has been married twice.  On May 13, 1967, she wed film producer Jon Peters, who was originally a makeup artist and hair stylist.  The couple had a son, actor/producer Christopher Peters (born September 23, 1968).  After a two-year separation, they divorced in 1975 and Peters moved on with Barbra Streisand.  However, Lesley didn't blame Streisand for the divorce.  In 1982, she told People magazine that "Barbra was not the reason we split.  Jon and I had severe problems."

From 1977 to 1985, Lesley co-habited with  choreographer and film director Jeffrey Hornaday.  She and Hornaday met while working on a television special.

Since January 16, 2000, Lesley has been married to Ron Taft, an advertising executive, whom she met at a hair salon.  In a 2019 interview with Closer Weekly, she was asked how her current marriage with Taft differed from her previous one to Peters, she replied, "It couldn't be more diametrically opposed.  I am not who I was when I got married at 20, and there's so much that I don't want in my life that my marriage encapsulated."

* As a teenager, Lesley Ann Warren had anorexia.  "The epitome of a ballet dancer was to be super thin," she told Closer Weekly, "and all of us were starving ourselves."  A therapist eventually helped Lesley heal and made her realize how her demons were ruining her life.

* In 1983, Lesley was nominated for an Academy Award in the category of Best Supporting Actress for her performance in the 1982 film Victor/Victoria, a musical comedy starring Julie Andrews and directed by Julie's late husband, Blake Edwards.  Lesley portrayed Norma Cassidy, the annoying peroxide-blonde girlfriend of a gangster, played by James Garner.

* Lesley's brother, Richard Lewis Warren (born in New York City on February 29, 1952) is a composer of music for television and an actor.