Keeping up with Brandon Cruz: From child star to punk rocker 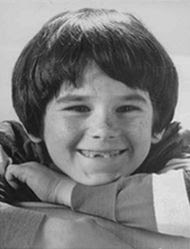 "Brandon Cruz is not a fan of Hollywood, and it's not because after spending three years costarring on The Courtship of Eddie's Father he felt abandoned by the system, tossed aside and lost himself in drugs and alcohol."

Brandon Cruz is a former child star who has managed to survive life as an adult.  Despite his 25-year struggle with alcohol and drug addiction, he has succeeded in beating the odds.  He hasn't suffered a  hellish descent into a life of crime and suicide attempts.  At one time, he was active with the group A Minor Consideration, an organization started by Paul Petersen of The Donna Reed Show in order to help child actors maintain their careers.  In 2011, Brandon told American Profile magazine that surfing and punk rock "probably saved my life."

The child actor was just five years of age when he originally auditioned for the role of Eddie Corbitt on the TV series The Courtship of Eddie's Father.  He was seven years old when the show debuted in September of 1969.  The sitcom ran on the ABC network for three seasons, until its final episode on March 1 1972.  It was based on the 1963 romantic comedy starring Glenn Ford as Tom Corbitt, a widowed father, and Ron Howard (then billed as "Ronny Howard) as his son.  Both the film and the television show were based on a 1961 novel of the same name by Mark Toby.

Brandon Edwin Cruz was born May 28, 1962 in Bakersfield, California.  When Brandon was two months old, his family moved to Ventura County, California.  The Courtship of Eddie's Father was Brandon's breakthrough role.  As the mischievous Eddie Corbitt, he was always scheming to find the right match for his widowed father..  Bill Bixby, who had starred in My Favorite Martian, played the role of Brandon's TV dad, Tom Corbitt..  The Corbitt housekeeper, Mrs. Livingston, was portrayed by Miyoshi Umeki, a Japanese-American singer and actress

Brandon had great respect for Bill Bixby, who died in 1993.  In his 2011 interview with American Profile, he stated that "Bill Bixby was like my second father."  In a 2019 interview with Closer Weekly, he said that Bixby deserved more recognition in Hollywood."  He revealed that he was attempting to raise funds to get the actor a star on Hollywood's Walk of Fame.  He's still at it.  On May 21, 2021, Brandon wrote the following update on the website he organized to raise funds for Bixby's star: "Five years and barely halfway there.  I'll never stop, ever.  Bill was a patient man, and so am I . . . "

Below is a 1969 publicity photo for The Courtship of Eddie's Father.  From left, Bill Bixby, Brandon Cruz and Miyoshi Umeki. 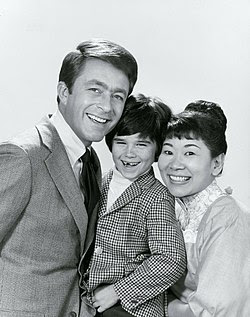 Brandon starred as David Lev, a ten-year-old Israeli boy in the 1973 TV movie The Going Up of David Lev.  He also played the role of Clay Rankin in the 1976 television movie Jeremiah of Jacob's Neck.  In 1978, Brandon was reunited with his Courtship of Eddie's Father co-star Bill Bixby in an episode of Bixby's new series, The Incredible Hulk.  In the episode, entitled "747" (Season 1, Episode 7, Air Date: April 7, 1978), Brandon's character, Kevin, assists Hulk in rescuing a pilotless 747 jetliner.

In the late 1970s, Brandon began to focus on punk rock music.  By the early 1980s, he had given up acting,  He wore a blue mohawk haircut and had become the lead singer for the punk rock band Dr. Know.  The band was part of the early hardcore punk movement called "Nardcor" in Ventura County.  The movement began at Silver Strand Beach, also known as Hollywood by the Sea.

Brandon Cruz performed with the group Flipper in 1995.  In 2001, Brandon became lead singer for the Dead Kennedys.  After disagreements and friction, he was replaced in the band by Jeff Penalty in 2003.

In an interview with Ginger Coyote for Pink Globe (circa 2008), Brandon stated"  "I had been in a band before Dr. Know with a bunch of older surfers. but we did a lot of cover songs . . . I hadn't acted since Bad News Bears in '75.  I was too busy surfing and skating, and seeing bands play."  When asked if Hollywood or the Industry criticized him for being in a band, he replied, "No one knew I was in a band for a while.  I was trying to stay away from being Eddie.  I still had an agent and I got a few interviews, but I would show up high on coke and wearing a leather jacket with blue hair, so word got around that I was pretty much over it."

* In 1997, Brandon Cruz released a solo CD called Eddie is a Punk.  The album includes a punk version of "Best Friend," the theme song for The Courtship of Eddie's Father, with Harry Nilsson, who composed the song, playing piano.  In the introduction to The Courtship of Eddie's Father, Brandon and Bill are seen frolicking on the beach to strains of "Best Friend."

* Brandon has worked on the sound board as an assistant editor on the animated TV series South Park.  He has also worked behind the scenes and intermittently on various productions such as Mary-Kate and Ashley Olsen's straight-to-video movies and the boxing reality show The Ultimate Fighter.

* Bill Bixby passed away on November 21, 1993.  He died in Los Angeles of complications from prostate cancer.  He was 59 years old at the time of his passing.

* Miyoshi Umeki died of cancer on August 28, 2007.  She was 78 years old at the time of her passing.  During her career, Umbeki was nominated for a Tony Award and a Golden Globe.  In 1958, she became the first Asian woman to win an Academy Award for acting.  She received an Oscar for Best Supporting Actress for her performance in the film Sayonara.

* In 1991, Brandon Cruz received the Child Star Life Time Achievement" Award from by the Young Artist Foundation for his role on The Courtship of Eddie's Father.

* According to Your News Cafe, Brandon has become a rehab specialist.  After conquering his own demons, he has helped others stay clean and sober.  His clientele is confidential and includes celebrities.