Whatever happend to Kristin Harmon Nelson?

Born June 25, 1945, Kristin Harmon Nelson is 65 years old now.  When she married actor and singing star Ricky Nelson on April 20, 1963, she was 17 and pregnant with their first child, actress Tracy Nelson (born October 25, 1963).  The couple went on to have three other children – twins Matthew and Gunnar who formed a band called Nelson (born September 20, 1967) and actor/musician Sam Hilliard Nelson (born August 29, 1974.)
After her marriage to Rick Nelson, Kris was immediately thrust into the television spotlight and became both Ozzie and Harriet’s real-life and TV daughter-in-law.  In 2008, when asked if Ozzie and Harriet had embraced her, she replied, “Completely.  When we told them about our engagement, Ozzie’s first comment was, ‘Great, great, can you act?’  I said I didn’t know but it really didn’t matter because anybody who was on the show sounded like Ozzie.  He wrote, directed and controlled everything about it.  He listened to the show with a radio ear, which meant he turned his back on the actors when they spoke so he could hear what he wanted to hear.  He wouldn’t even look at the action.”
Kristin and Rick Nelson were divorced in December of 1982.  After the death of Rick Nelson in a 1985 plane crash, Kris had some very troubled times.  In 1987, she underwent rehabilitation for drug abuse.  Her brother, actor Mark Harmon, and his wife, Pam Dawber (of Mork and Mindy fame), petitioned for custody of 12-year-old Sam on the grounds that Kristin was an unfit mother.  Kristen was eventually given custody of her son, with Mark Harmon granted visitation rights.
Kristin Harmon married television producer and director Mark Tinker in 1988.  Mark is the son of Grant Tinker who was head honcho of NBC and founder of MTM productions.  He is also the former stepson of Mary Tyler Moore who was married to the elder Tinker from 1962 until 1981.  Kristen’s marriage to Mark Tinker ended in divorce in the year 2000.  After the divorce, Kris moved to Santa Fe, New Mexico where she lives a peaceful life as an artist.  Her art is described as having the primitive feel-good warmth of Grandma Moses.
When Kristin was 17, inspired by the assassination of John F. Kennedy, she expressed her emotions in a painting entitled “When the Kennedys were in the White House”.  A photograph of Kris standing in front of her work appeared in a 1966 issue of Life magazine.  Rick Nelson took the painting to a gallery in Los Angeles where it became the impetus for Kris’s first show.  In an October 21, 2008 interview in santafe.com, Kris is quoted as saying that Jacqueline Kennedy “somehow saw the brochure for the show and Robert Kennedy called me saying she wanted to buy it.  I told him it was always done for her and that it would be a gift.”  The painting eventually ended up in the possession of the late Senator Ted Kennedy.
Kristin Harmon seems content in Santa Fe.  She first came to New Mexico with Rick in 1970 when he had a gig in Taos.  On another trip, she made a point of visiting Santa Fe and was so taken by the place that she didn’t want to go home.  She is firmly settled there now and her paintings are sold at the Coady Contemporary gallery.  Kris says the one thing she always wanted to be was an artist.
By the way, Kristin Harmon has written a book about her life.  Her autobiography, entitled Out of My Mind, was published in 1997.  It is a coffee table book and includes a collection of her artwork.  Whenever Kris did something zany as a child, her father, football star Tom Harmon, would tell her she was out of her mind.  Her senior year book had a line under her picture that read, “Kris is out of her mind” and it listed all the creative and artistic things she had done.

A BOOK RECOMMENDATION FROM TV BANTER
Readers, I would like to recommend a book to you.  I am reading Growing Up Laughing by Marlo Thomas, Hyperion, 2010.  If you like television comedy, this book is a must.  I am enjoying it immensely. 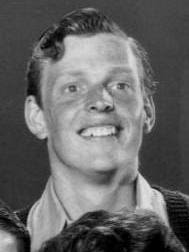