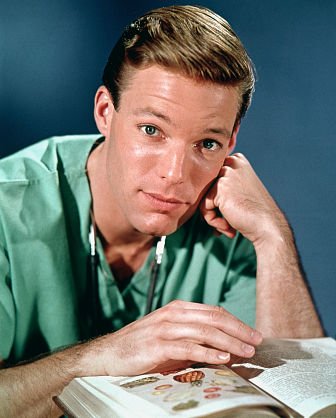 Richard Chamberlain played the title role in the popular television series Dr. Kildare.  As Dr. James Kildare, he was a leading heartthrob of the early 1960s.  With his handsome features and charming demeanour, Richard had the women swooning over him.  The series aired from 1961 until 1966 and made the previously unknown Chamberlain a star.
Kildare was certainly different from some of today’s television doctors.  One of the most popular current medical dramas is House.  House details the experiences of a team of diagnosticians at a fictional New Jersey hospital.  The group is headed by grumpy, unshaven, misanthropic Dr. Gregory House.  As portrayed by British actor Hugh Laurie, House is a medical genius, although he is not the most pleasant of human beings.  His methods are unconventional and he certainly does not play by the book.  For many, that is an integral part of his appeal.
Medical shows have sure changed since the days of Marcus Welby, Ben Casey and James Kildare.  In contrast to House, they had a scrubbed and squeaky clean image.  When M.G.M. chose Dick Chamberlain for the role of Dr. Kildare, fellow actor Jack Nicholson quipped, “It was inevitable.  Who else could possibly look as antiseptic as Dick?”
Dr. Kildare was based on a hugely successful series of movies in the 1940s.  James Kildare was a young intern in a big city hospital.  He dealt with the traumas and tribulations of his patients while trying to earn the respect of Dr. Leonard Gillespie, the senior doctor in his specialty, internal medicine.  Gillespie was portrayed by Toronto-born Raymond Massey, brother of former Governor General of Canada, Vincent Massey.
In the third season of the series, Dr. Kildare was promoted to resident.  His intern colleagues were no longer seen and the stories began to focus more on individual patients and their families.  For the 1965/66 season, the show was seen twice a week as a half hour program instead of once a week for an hour.
George Richard Chamberlain was born in Beverly Hills, California on March 31, 1934.  He was the second son of Charles Chamberlain, a salesman, and Elsa, a homemaker.  Richard, who turns 77 years old today had an unhappy childhood and did not enjoy school until he attended Pomona College in Claremont, California.  At Pomona, Richard studied art and developed an interest in acting.  Soon after his graduation, Paramount Studios expressed an interest in the young man.  Richard, however, had to give up the chance to sign with Paramount because he was obliged to serve in Korea for a period of more than a year.
When Dick returned from military service, he was ready to launch his acting career.  He made guest appearances on such series as Gunsmoke and Mr. Lucky before his big breakthrough with Dr. Kildare in 1961.  The show was a sensation and Chamberlain became a teen favourite.  He appeared on posters and launched a brief singing career.
After 191 episodes, Doctor Kildare came to end in 1966.   Richard tried to become a serious film actor but he couldn’t shake his Prince Charming image and the perception that he was only a television star.   As a result, he left Hollywood behind and concentrated on being a stage performer.  He appeared in such productions as The Philadelphia Story, Private Lives and West Side Story.  In 1968, he moved to England to perform in classical theatre.  When he returned to the U.S., he made a successful debut on Broadway as Reverend Shannon in Night of the Iguana.  He also enjoyed a degree of popularity in such films as The Three Musketeers (1973) and The Towering Inferno (1974).
It was on television, however, that Richard enjoyed the greatest resurgence of his career.  He won much acclaim and earned the title “king of the mini-series.” for his performances in The Count of Monte Cristo (1975), Shogun (1980) and The Thorn Birds (1983).  All three won him Emmy nominations and the latter two earned him Golden Globe awards.
In December of 1989, Richard was “outed” by the French women’s magazine Nous Deux.  It was not until 2003 at age 69 that he identified himself as a homosexual in his autobiography Shattered Love.  Appearing on NBC’s Datelane, he made the following statement: “I am not a romantic leading man anymore so I don’t need to nurture that public image anymore.  I can talk about it now because I’m not afraid anymore . . . When I grew up, being gay, being sissy or anything like that, was verboten.  I disliked myself intensely and feared this part of myself intensely, and had to hide it and became ‘Perfect Richard, All-American Boy’ as a place to hide.” 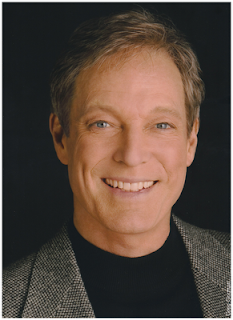 In more recent years, Chamberlain has devoted himself to musical theatre.  He has also appeared in the gay-themed comedy I Now Pronounce You Chuck and Larry (2007) and television episodes of Will and Grace (2005 episode, “Steams Like Old Times”) and Desperate Housewives (2007 episode, “Distant Past”).  To watch a video of his performance in Desperate Housewives, click on the link below.
http://www.youtube.com/watch?v=HBjB4ock6-4
Richard resided in Hawaii for quite some time with his partner, actor-writer-producer Martin Rabbett, but returned to Hollywood in 2010.  Since his return, he has taken on the role of Jonathan Byrold in the TV drama Brothers and Sisters and he has guest starred in the U.S. series Chuck as an international spy named Adelbert De Smet.
- Joanne
Posted by Joanne at 12:31 AM