Don Draper of Mad Men is a notorious bad boy.  The suave advertising executive has been adulterous and deceitful.  A hard-drinking, chain-smoking man of the 1960s, Draper is the founding partner and Creative Directive of Sterling Cooper Draper Price, a fictional New York advertising firm.  He is handsome and elegantly attired and women find him difficult to resist.

Actor Jon Hamm has been playing the role of Don Draper since 2007.  How different is heartthrob Ham from the character he portrays on the popular AMC television series? Well, first of all, both Jon and Don had difficult childhoods but Draper's was far worse.

Donald Francis "Don" Draper was born Richard "Dick" Whitman in 1926,  the child of a prostitute who died in childbirth.  His father, Archie Whitman, was a brutish drunk and Dick was raised by his father's wife, Abigail, a cold-hearted disciplinarian.  When Dick was ten, his father died after being kicked in the face by a horse.  His stepmother then hooked up with another man, Max, with whom she had a son.  To escape his unhappy family life, Dick enlisted in the army and served in the Korean War.  During the war, he assumed the identity of  Lieutenant Don Draper, who was killed in an explosion while the two were on duty at an isolated base.  Dick switched identification tags with the dead officer and took on his name.  He then returned to the U.S. and started a new life as Don Draper, cutting off all contact with his family.

Joanthan Daniel Hamm was born on March 10, 1971 in St. Louis, Missouri.  His parents divorced when he was just a toddler and he lived with his mother, Deborah, until her death of colon cancer.  Hamm was only 10 years old when his mother passed away.  From then on, the youngster was raised by his paternal grandmother and his father, Daniel Hamm.

Dan, nicknamed "Whale" due to his 6 foot 3 inch, 300 pound frame, ran the family trucking business.  Dan's elderly mother, Jon told GQ magazine in 2008, was "not the nicest person."  "We were three generations living under one roof, which is difficult in the best of circumstances,” he explained.. “She probably felt like I was this weird kid who’d come along and was taking her son’s attention away in the winter of her years. The blessing was that school started at 8 a.m. and ended at 5 p.m., so I could spend a lot of time outside of the house.”

Jon Hamm first developed an interest in acting when he was asked to play Winnie the Pooh in grade school.  In 1988, during his firs year at John Burroughs Preperatory School in St. Louis, Jon portrayed Judas in the school's production of Godspell.  A fine athlete, he was also a linebacker on the school's football team.  In a January 2012 article in St. Louis Magazine, Ham's former drama teacher at Burroughs, Wayne Solomon, is quoted as saying, "I knew him as a football player and baseball player. It’s funny, but I think of him so much more when I see the football and baseball fields than when I go into the auditorium.”

Nevertheless, Hamm's desire to act eventually won out over his athletic aspirations. He rejected offers to play football at several Ivy League universities and decided to attend the University of Texas instead.  After the deaths of his grandmother and his father, however, he returned home.  Jon's dad, who suffered from acute diabetes, had passed away on New Year's Day, 1991 and the 20-year-old chose to complete his studies at the University of Missouri.  The young man became very involved in the university's theatre program and spent two summers performing in the school's repertory company.  In 1993, he was awarded a bachelor's degree in English after which he found employment as a drama teacher at his old high school, John Burrroughs.  One of his students was actress Ellie Kemper.

In 1995, Jon Hamm packed his bags and headed for Hollywood to pursue an acting career.  In Los Angeles, the aspiring actor struggled at first, waiting on tables to make ends meet.  His first appearance on a television series was an uncredited cameo role as a good-looking guy at a bar in a 1997 episode of Ally McBeal entitled "Compromising Positions" (Season 1, Episode 2, Air Date: September 15, 1997).  Next came a guest appearance as Buzz on an episode of the sitcom The Hughleys ("Lies My Valentine Told Me," Season 2, Episode 15, Air Date: February 11, 2000).

Success came gradually for Jon but things started going his way when he won a small role as a pilot in the 2000 Clint Eastwood film, Space Cowboys.  From 2000 to 2001, he had a recurring role in 18 episodes of the NBC television drama Providence.  In the series, set in Rhode Island, Jon portrayed a firefighter named Burt Ridley.  Below is a photo of him with Paula Cole (as Joan "Joanie" Hansen) in a scene from the show. 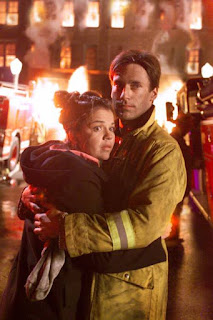 From 2002 to 2004, Hamm had another recurring role, this time as Inspector Nate Basso in The Division, a police drama on Lifetime Television.  The series centred around the trials and tribulations of a team of female cops in the felony division of the San Francisco Police Department .  Below is a photo of the cast of The Division: (From Left) - Jon Hamm, Nancy McKeon, Bonnie Bedelia, Lisa Vidal, Tracey Needham and Taraji P. Henson. 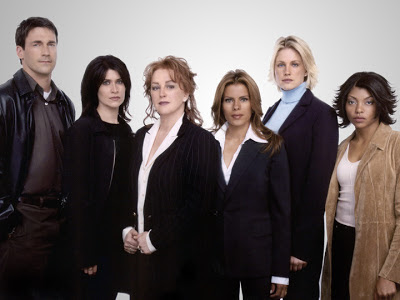 In 2005, Jon appeared in two episodes of CSI: Miami as Dr. Brent Kessler.  The first episode, entitled "Thrree-Way," aired on October 17, 2005 (Season 4, Episode 5).  The second episode, "Payback," aired on December 19, 2005 (Season 4, Episode 11).  From 2006 until 2007, the actor had recurring roles in two  television series, What About Brian and The Unit.  He appeared in six episodes of the comedy/drama What About Brian in the role of Richard Povich.  He also portrayed Wilson James in five episodes of The Unit, an hour-long CBS action/drama series about a top-secret U.S. military unit.

Then came the role that rocketed Jon Hamm to television stardom, a role for which he didn't think he'd be chosen.  When Hamm auditioned for the part of Don Draper on Mad Men, he competed with more than 80 other hopefuls.  He didn't feel he had much of a chance of being selected for the role of the ruthless advertising executive.  In fact, he told David Wigg of the Daily Mail that he was "the complete outsider."  He was the least experienced and least known of the candidates.  "They'd said they wanted a sharp, stylish character to just play himself, and I thought I was too much of a nerd - and so did everyone else," stated Hamm.  To his astonishment, he was cast in the role of the 1960s advertising executive.

Jon Hamm is certainly more casual and laid-back than the impeccably-dressed Don Draper but does Hamm drink and smoke as much as his Draper character?  In a March 2012 interview in London's Daily Mail, Hamm, now 42, told reporter Elaine Lipworth that he doesn't drink as much as the martini-loving Don Draper.  "I would be unconscious if I did," he remarked.

In a 2010 episode of Mad Men, Jon's Draper character created quite a stir when he published a full-page anti-tobacco letter in the New York Times titled "Why I'm Quitting Tobacco."  The letter began with these words: "Recently my advertising company ended a long relationship with Lucky Strike, and I'm relieved."  Draper wrote his manifesto while puffing away on a cigarette in his Greenwich Village apartment.  As for John Hamm, he kicked the habit at the age of 24.

The cigarettes smoked on Mad Men are herbal cigarettes and they are nicotine-free. Yet, herbal cigarettes are not much better than tobacco because when burned, they produce carbon monoxide, tar and other potentially harmful chemicals.  Although the portrayal of smoking on the show has been greatly criticized,  Hamm has claimed that it is necessary because "we are going for verisimilitude." "People did smoke," he has argued."  "And it creates a mood on the show."

Neither is Jon Hamm a philanderer like Draper, who repeatedly cheated on his first wife, Betty. Although not married, Jon has been in a long-term relationship with actress and filmmaker Jennifer Westfeldt since 1997.  Of his relationship with the 43-year-old Westfeldt, he told the New York Post's Page Six Magazine in 2007, "We may not have a piece of paper that says we're husband and wife, but after 10 years, Jennifer is more than just a girlfriend. What we have is much deeper and we both know that. To me, people [should] get married when they're ready to have kids, which I'm not ruling out."

* In early June of 2012, Jon Hamm and Jennifer Westfeldt were robbed in the U.K.  The couple were in  London. to promote their film Friends With Kids when, according to Life & Style magazine, Jennifer's handbag was swiped by a thief while they were dining at a restaurant.  The purse contained the key to their hotel room with the name of the hotel on it.  When they returned to the room, they found it ransacked and robbed.

* Jon Hamm lives in a 1920s-style Mediterranean house in Los Feliz, California, a trendy area of Los Angeles.  He and Jennifer Westfeldt have a dog named Cora, a German Shepherd mix.  To view a photo of the couple with their beloved pooch, click on the link below.

* Hamm is a fan of The Simpsons and provided the voice of an FBI investigator in an episode of the animated series entitled "Donnie Fatso" (Season 22, Episode 9, Air Date: December 12, 2010).

* Hamm has also appeared on three episodes of Saturday Night Live between 2011 and 2012.


EDITOR'S UPDATE (December 27, 2015):  In September of 2015, the press reported that Jon Hamm and Jennifer Westfeldt had ended their relationship after 18 years together.  In a statement to People magazine, the couple said, "With great sadness, we have decided to separate, after 18 years of love and shared history.  We will continue to be supportive of each other in every way possible moving forward."  The separation occurred just months after Hamm had completed a stint in rehabilitation for alcoholism.