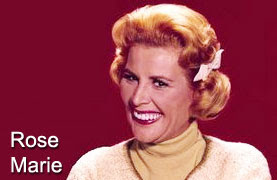 Rose Marie is approaching her 90th birthday and has been in show business almost all her life.  She was born Rose Marie Mazzetta in New York City on August 15, 1923. Her father, Frank Mazzetta, was an Italian-American and her mother, Stella Gluszcak, was Polish-American.  Her parents never married because her father already had a wife and two children in Brooklyn.  Frank Mazzetta, also known as Frank Curley, was one-time vaudeville performer with criminal connections.

Although best known for her portrayal of television comedy writer Sally Rogers on The Dick Van Dyke Show, Rose Marie's career goes back to her early childhood when she was billed as "Baby Rose Marie."  She began performing at the age of three after winning an amateur talent contest at the Mecca Theatre on 14th St. in New York City.  The song she sang in the competition was "What Can I Say, Dear, After I Say I'm Sorry?"

Rose Marie's father brought her to Atlantic City and quickly took control of her career and her earnings.  Due to his underworld connections, the youngster was introduced to Al Capone in Chicago.  In her 2003 memoir, Hold the Roses, she writes that "Uncle Al"  picked her up, kissed her on the cheek and told her, "If you ever need me for anything, tell your father."

By the time she was five, Rose Marie was a radio star on NBC with her own coast-to-coast program.  She shunned conventional children's music and sang blues songs and romantic melodies instead.  Her voice was remarkable and she could belt out a song like Sophie Tucker.  Some skeptics thought her vocals sounded too mature and husky for a child singer.  NBC sent her on personal appearances across America.in order to quell such rumours as the one that she was really a midget.  During her time as child star, she performed with many big name entertainers such as Rudee Vallee, Dick Powell and Milton Berle. 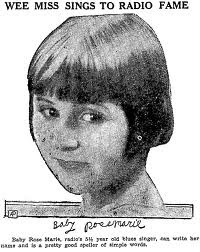 Baby Rose Marie appeared in some of the earliest talking films.  In 1927, she was so popular that she starred in the Vitaphone short film that opened Al Jolson's The Jazz Singer, the first full length motion picture with synchronized sound.  As a four-year-old, she attended The Jazz Singer's premiere at the Warners' Theatre in New York City.  Rose Marie's first credited appearance, however, was in a 1929 short called Baby Rose Marie the Child Wonder.  Her 15-minute shorts were shown in movie theatres prior to the feature film and they consisted of  Baby Rose Marie standing on stage, smiling at the camera and singing several songs.

Once she reached adolescence, Rose Marie dropped the "Baby" moniker.  At 15, she left show business to attend high school.  Soon after graduation, she returned to the stage, performing in nightclubs across the U.S., from New York to the Las Vegas Strip.

After World War II, Rose Marie married William Robert "Bobby" Guy, a trumpet player with the Kay Kyser Orchestra.  Although her overbearing father tried to end the relationship, they were wed in New York City on June 19, 1946 and their marriage was a happy one.  Bobby, who worked with such greats as Louis Armstrong and Hoagy Carcmichael, eventually became the first trumpeter for NBC's Tonight Show orchestra.  The couple had one child, a daughter, Georgiana Marie Guy (nicknamed "Noop"), born on May 18, 1947.  Georgiana, now 66, is a successful horse breeder and businesswoman.  Bobby Guy died of a  blood infection on May 27,1964 and Rose Marie never remarried.   On May 12, 1964, just 15 days before his death, he and Rose Marie attended the Grammy Awards

When the Las Vegas Flamingo Hotel and Casino opened in December of 1946, Rose Marie was one of its opening acts, along with Jimmy Durante and Xavier Cugat.  The Flamingo was the first luxury hotel-casino on the Strip and in the ensuing years, Rose Marie became a regular headliner in Vegas where she performed at the Riviera Hotel, Sahara, Thunderbird and Harrah's in Reno and Tahoe.

In the late 1940s and 1950s, Rose Marie performed as a stand-up comic.  As part of her routine, she adopted the persona of a wise-cracking single woman seeking a husband, similar to her future Sally Rogers character on The Dick Van Dyke Show.  In the 1950s, Rose Marie also made her first foray into television.  In June of 1955, she appeared on The Red Skelton Show (also known as The Red Skelton Hour) as a dancer teacher.  She was also a guest star in a 1957 episode of the popular western series, Gunsmoke.  She played Mrs. Monger in an episode entitled "Twelfth Night" (Season 3, Episode 16, Air Date: December 28, 1957).

From 1958 to 1959, Rose Marie appeared in seven episodes of The Bob Cummings Show (also known as Love That Bob).  In 1960, she was given her first regular role on a television sitcom.  She played Bertha, a co-worker of the Ruth Sherwood character (Elaine Stitch) on My Sister Eileen with Raymond Bailey as their boss, Mr. Beaumont, a publisher


The Dick Van Dyke Show premiered on CBS on October 3, 1961.  Created by comedian Carl Reiner, the show's initial ratings were dismal.  Colgate, the program's sponsor, however, was willing to wait for the comedy to build a following.  By its second season, the sitcom had become a hit and the former Baby Rose Marie had suddenly risen to fame in the television age.  Below is a photo of Rose Marie with Dick Van Dyke cast members (from left to right) Dick Van Dyke (Rob Petrie), Mary Tyler Moore (Laura Petrie), Morey Amsterdam (Buddy Sorrell) and Richard Deacon (Mel Cooley).

Rose Marie's Sally Rogers character was one of the few career women on American television in the early 1960s.  Quick-witted Sally held her own with Rob Petrie and Buddy Sorrell, her male colleagues on the comedy writing team of the Alan Brady Show.  Her character is reputed to have been inspired by the late Selma Diamond, a Canadian-born, Brooklyn-raised comic actress and television writer.  Diamond, who portrayed Selma Hacker for two seasons on Night Court, had a raspy voice like Rose Marie's. 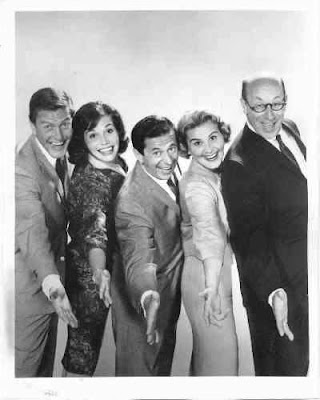 Bobby Guy's death occurred just before production was to begin on the fifth and final season of The Dick Van Dyke Show.  Rose Marie was so overcome with grief that she almost didn't return to the show. John Rich, the show's staff director. succeeded in talking her out of leaving.

After The Dick Van Dyke Show left the air in 1966,  Rose Marie became a regular panelist on The Hollywood Squares and appeared on other game shows such as Password and I've Got a Secret.  She also guest-starred on two episodes of The Monkees, appearing in a 1966 episode entitled "Ghost Town" (Season 1, Episode 7, Air Date: October 24, 1966) and a 1967 episode entitled "Monkee Mother" (Season 1, Episode 27, Air Date: March 20, 1967).


From 1969 until 1971, Rose Marie portrayed Myrna Gibbons on The Doris Day Show. She joined the cast at the beginning of the sitcom's second season in which Doris Martin (Doris Day) commuted from her farm to her job in San Francisco as a secretary  at Today's World magazine.  Rose Marie's character, Myrna, was another secretary at the magazine with whom Doris became friends.

In the early 1990s, Rose Marie had a recurring role as the mother of Frank Fontana on the popular sitcom Murphy Brown.  In 1996, she and Morey Amsterdam appeared together in an episode of the NBC sitcom Caroline in the City entitled "Caroline and the Watch" (Season 1, Episode 14, Air Date: February 1, 1996).  Rose Marie also performed in a 2004 Dick Van Dyke Show reunion special entitled The Dick Van Dyke Show Revisited.  Sadly, three cast members were unable to appear on that special. Not long after his appearance with Rose Marie on Caroline in the City, Morey Amsterdam died of a heart attack in Los Angeles on October 28, 1996.  He was 87 years old.  Richard Deacon, who played Mel Cooley, Alan Brady's brother in law and the producer of the Alan Brady Show, died of cardiovascular disease on October 8, 1984.  He was 63 years old.  Jerry Paris, who portrayed dentist Jerry Helper, the next-door-neighbour of Rob and Laura Petrie, passed away ion March 31, 1986 after brain cancer surgery. He was 60 years of age.

* Even in her earliest films, Rose Marie wore a bow in her hair.  Although her trademark hairbow has a special significance, the entertainer has not disclosed its meaning.

* On May 5, 2011, Rose Marie and Larry Matthews (Ritchie Petrie, son of Rob and Laura on The Dick Van Dyke Show). They made a surprise appearance at the Barnes and Noble booking signing event for Dick Van Dyke.  Larry and Rose Marie share an August 15th birthday.  Matthews, born in 1955, is now 57 years old.  To view photos of Rose Marie at the book signing, click on the link below.