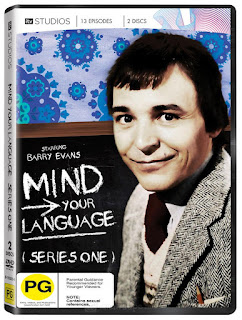 There have been many American television series about schools and teachers, from Our Miss Brooks in the 1950s to Mr. Novak in the 1960s to Room 222 and Welcome Back, Kotter in the 1970s.  The British sitcom, Mind Your Language, was the first one I know that focused on a teacher of English as a second language.

Mind Your Language premiered on ITV in late 1977.  It starred Barry Evans as Jeremy Brown, a teacher of English to immigrants at an adult education college in London. The show was politically incorrect and it was highly criticized for its ethnic stereotyping.  Among  Jeremy's students, for example, were Giovanni Cupello, a macho Italian chef; Chung Su-Lee, a zealous Chinese communist; Taro Nagazumi; a Japanese businessman; Anna Schmidt, a dour German and Danielle Favre, an alluring French woman.  In addition to dealing with his motley crew of international students, Brown had to face the criticisms of Miss Dolores Courtney, the stiff, overbearing headmistress of the college, played by Zara Nutley.

Mind Your Language was cancelled in 1979 by Michael Grade, who was then Deputy Controller for London Weekend Television (now ITV London), which produced the show.  Grade considered its stereotyping of immigrants to be offensive.  Mind Your Language returned, however, in 1986 for another 13 episodes.  The show was extremely popular in the UK and around the world, particularly in the countries that the students represented.  Many dismiss Mind Your Language as racist and outdated. Its defenders argue that even the English characters on the show were stereotyped.and that it was good-natured satire.

As for Barry Evans, the show's star, he had a very sad demise.  Barry Joseph Evans was born in Guildford, Surrey, England.  IMdb.com gives his birthdate as June 18, 1943 (According to Halliwell's Filmgoer's and Video Viewer's Companion, he was born in 1945 although his obituary in The Independent says 1943).  Abandoned as a baby, young Barry was raised in an orphanage at Twickenham, Middlesex.  He took an interest in theatre and won a John Gielgud Scholarship to train as an actor at the Central School of Speech and Drama in London.  His first major role on television was that of  Michael Upton, a medical student on the British comedy Doctor in the House. Doctor in the House was produced by London Weekend Television and ran from 1969 to 1970.  The show was based on a series of novels by Richard Gordon and it centred on the mishaps of a group of medical students.  Barry Evans reprised his role as Upton in the 1971 sequel to the series, Doctor at Large.

Although in his forties when Mind Your Language ended its run, Evans was continually typecast due to his fresh-faced, boyish appearance.  To his frustration, he was not considered for more mature roles and his acting work diminished.   As a result, he switched to driving a taxi in order to earn a living.  He was, nevertheless, cast in the role of Bazzard in the 1993 film adaptation of The Mystery of Edwin Drood.  The film, which did not make much of an impact, turned out to be Barry's last role.

With his acting career in severe decline, Barry left London.  By the late 1990s, he had become a minicab driver in Leicestershire, England.  On February 9, 1997, he was found dead at his bungalow in the Leicestershire village of Claybrooke Magna.  Police discovered his body after his stolen car was traced to his home.  There was an empty whisky bottle and a spilled aspirin container beside him.

The circumstances of Barry's death remain shrouded in mystery.  An 18-year-old was charged with theft.  and attempted murder but the charges against him were dropped due to "lack of evidence."  The coroner's report ruled that Barry had died as a result of an alcohol overdose, suggesting suicide or accidental death.   According to coroner Martin Symington, however, there was insufficient evidence to prove Evans had intended to commit suicide.  "Was he perhaps contemplating taking the tablets and the alcohol together, but passed out, before he could use the tablets?" Symington asked.

Some sources list Barry Evans' age at the time of his passing as 53 while others say he was 52.  He never married and had no children.  To watch a video tribute to Barry, click on the link below.

There was a 1986-1987 U.S. version of Mind Your Language entitled What a Country! What a Country! was set in Los Angeles where Taylor Brown (Garrett M. Brown) taught a night class for foreigners hoping to become American citizens.  The series was syndicated and only 26 episodes were produced.

What a Country! starred real-life Russian immigrant Yakov Smirnoff as Nikolai Rostapovich, a taxi driver and class member.  It revolved around the students' difficulties with language and customs in America.  It's interesting to note that Don Knotts of Andy Griffith Show fame, joined the cast in early 1987 as principal F, Jerry "Bud" McPherson. 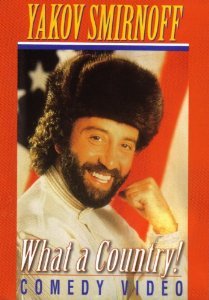