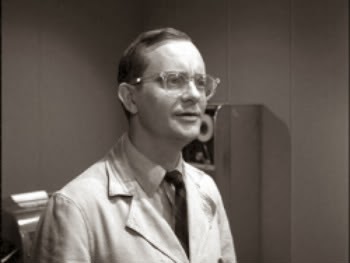 Wally Cox in the Twilight Zone episode "From Agnes - With Love"


Last week I viewed the film Her, starring Joaquin Phoenix, Amy Adams and Olivia Wilde. In this 2013 science fiction romance, Phoenix plays Theodore Twombly, a lonely writer going through a divorce. He falls madly in love with Samantha, his computer operating system, voiced by Scarlett Johansson.  Yes, you read that right! Not only that, but Theodore's friends don't find anything strange about it.  They don't even bat an eyelash when he reveals that he is dating his computer operating system.  Believe it or not, he and Samantha even go on a double date with another couple.  It's a rather sad commentary, I think, about our growing attachment to computer devices and our disconnection from other human beings.

After watching the movie Her, I could not help but be reminded of a classic Twilight Zone episode that was aired on television almost 50 years ago - "From Agnes - With Love" (Season 5, Episode 20), featuring Wally Cox.  The movie Her can be regarded a 21st century version of "From Agnes With Love" and I am more convinced than ever that Twilight Zone creator Rod Serling was a genius.  He was extremely creative, imaginative and prescient.  He had a great sense of the future. 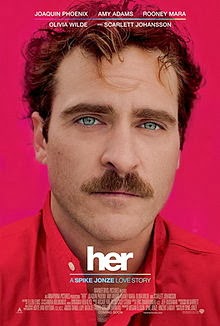 "From Agnes - With Love" was originally broadcast on CBS on February 14, 1964 - yes Valentine's Day! Somehow, I don't think that was a coincidence.  In the episode, Wally Cox plays the central role of James Elwood, a computer programmer who takes advice on his love life from a computer named Agnes.  The cast also includes Ralph Taeger, Sue Randall, Raymond Bailey, Don Keefer, Byron Kane and Nan Peterson.

Narrator Rod Serling introduces the episode as his rich voice intones these words:


James Elwod, master programmer, in charge of Mark 502-741, commonly known as ‘Agnes,’ the world’s most advanced electronic computer.  Machines are made by man for man’s benefit and progress, but when man ceases to control the products of his ingenuity and imagination, he not only loses the benefit, but he takes a long and unpredictable step into - The Twilight Zone.

Here is a synopsis of the plot of "From Agnes - With Love":

A company supervisor (Raymond Bailey) calls upon computer programmer James Elwood when the office computer, known affectionately as Agnes, breaks down. The current programmer, Fred Danzinger (Don Keefer), is unable to resolve the functional error and Jim is asked to see if he can figure out what has gone wrong (Agnes, by the way, is a UNIVAC, the first commercial computer produced in the United States).

Jim Elwood solves the problem so quickly and efficiently that he soon finds himself in charge of the machine. Agnes and Jim soon establishes a rapport and the machine begins giving him romantic advice about Millie (Sue Randall), a co-worker with whom he has arranged to go on a date.  Their date ends in disaster after Jim awkwardly spills champagne on her.  The next date doesn't go well either due to poor advice from Agnes who deliberately misleads the lovelorn computer expert. Jim is distraught when Millie winds up meeting and spending the evening with his romantic rival, a fellow computer programmer named Walter Holmes (Ralph Taeger).

It turns out that Agnes has her own agenda.  She (or it?) is in love with Jim herself and is jealous of Millie. Jim soon realizes that the computer has feelings for him and is losing logical control over its own functions. Unable to solve Agnes' dysfunction, the frustrated computer technician breaks down in frustration.  His boss urges him to take a long leave of absence and he is replaced by Walter, his romantic rival and former subordinate. 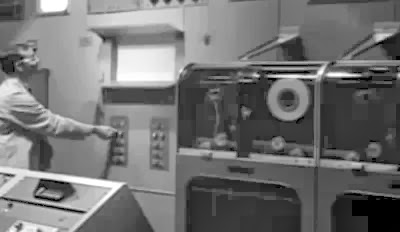 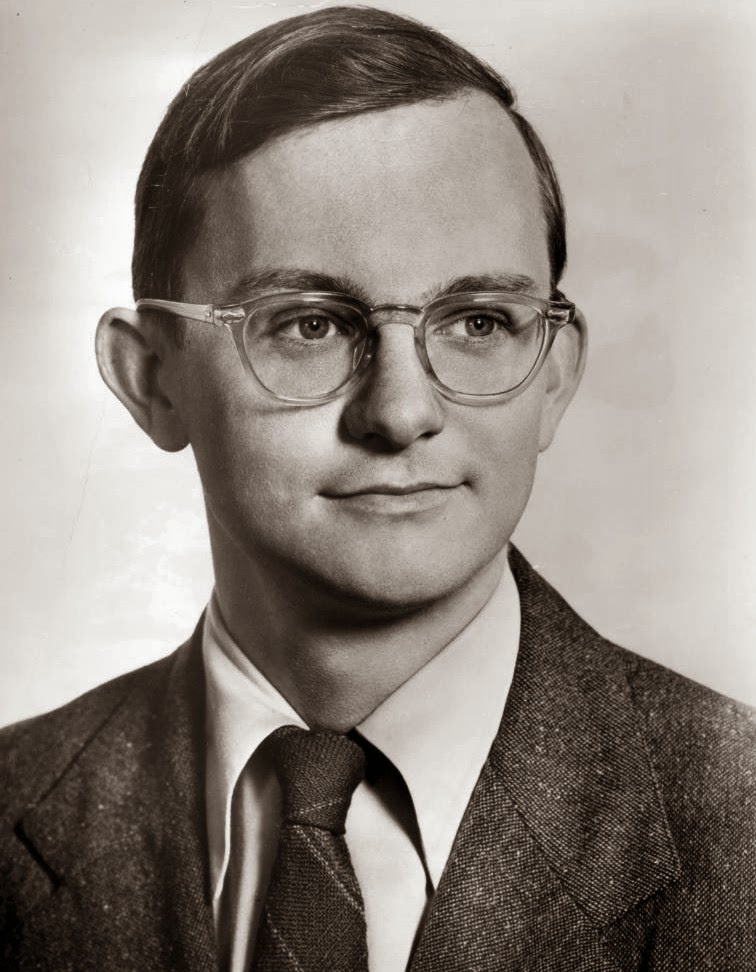 * The late Wally Cox delivered a superb performance in the role of nerdy Jim Elwood. Although not a Hollywood leading man, Cox was a fine actor/comedian and is strongly associated with the golden era of American television's earliest days.  He was born Wallace Maynard Cox on December 6, 1924 in Royal Oaks, Michigan, a suburb of Detroit.  His father, George W. Cox, was an advertising executive and his mother, Eleanor Atkinson, was a mystery author.  She wrote under the pseudonym Eleanor Blake.and is best known for the detective novel Death Down East, published in 1942.

Wally's parents divorced when he was a young child.  At the age of 10, he moved with his mother and younger sister to Evanston, Illinois.  It was there that he became friends with a neighbourhood boy named Marlon Brando.  In the 1950s, Wally and Brando became roommates in an apartment in New York City. Brando was already involved in acting and he encouraged Wally to become involved in the industry too.. Their friendship lasted for the rest of Cox's life and Brando travelled from his home in Tahiti to attend Cox's wake.

Cox did well academically and developed and interested in botany.  His plans to become a botanist were put on hold when his  mother was stricken with polio.  He worked at a variety of odd jobs to support the family until he was drafted into military service in 1942.  After being honourably discharged from the army, the young man gave up on the idea of being a botanist and studied handicrafts at the school of industrial arts at New York University.  He became a skilled silversmith.  Wally then opened his own shop in New York where he sold men's accessories such as tie clips that he made himself.

Yet Cox had a talent for comic monologue and he enjoyed entertaining his friends with his impersonations. Spurred on by Brando and others, he joined a local improvisational troupe, the American Creative Theater Group.  He built a name for himself in theatre productions and nightclubs around New York City and became a frequent quest on radio and television programs.

A bespectacled man with a high-pitched voice, Wally's onscreen persona was meek and polite, the quintessential milquetoast.   Although only about 5 ft 5 in. (1.65 metres) or 5 ft. 6 in. (1.68 metres), he was actually quite athletic.  The veteran of World War II was also a motorcycle enthusiast, and a skilled chess player, wood carver and jewellery maker.  Nevertheless, he found himself typecast as a prim and proper bookkeeper or a birdwatcher.

From 1952 to 1955, the actor starred in Mr. Peepers, as Robinson J. Peepers, a shy science teacher at Jefferson Junior High.  Other members of the cast were Tony Randall as history teacher named Harvey Weskit, Patricia Benoit as county nurse Nancy Remington (who later wed Peepers) and Marion Lorne as Mrs, Gurney, an often befuddled English teacher. It's interesting to note that Marion went on to play Samantha's  confused Aunt Clara on Bewitched.

Peepers and school nurse Nancy Remington were married  in a live episode at the end of the 1953-1954 season.  Their wedding was one of the highest rated television shoes of 1954.  After that, the show's popularity waned and it went off the air in 1955 due to declining ratings.

Mr. Peepers was a live sitcom.  It was broadcast before an audience at the New Century Theatre in New York City and recorded in kinescope.

From 1956 to 1957, Wally starred in another sitcom called The Adventures of Hiram Holliday  He played Hiram Holiday, a mild-mannered proofreader for a New York newspaper who turns out to have exceptional skills in several activities including scuba diving, fencing, airline piloting and even art forgery.  His newspaper's publisher decides to utilize Hiram's talents by sending him on an adventurous trip around the world with a reporter to accompany him. (There seems to be a pattern here. Wally Cox must have had some sort of Clark Kent complex.)

Beginning in 1964, Wally Cox provided the voice of Underdog in the animated series of the same name  . Underdog was the alter ego of  Shoeshine Boy.  He appeared whenever his love interest, Purebred Polly, appeared to be in danger from Simon Bar Sinister and other villainous characters.  The unlikely canine hero spoke in rhymes such as "There's no need to fear, Underdog is here!"

Underdog aired on the NBC network and continued in syndication until 1973. Production of new episodes, however, ceased in 1967.  124 episodes of the cartoon series were made.

From 1969 until 1972,  Cox appeared with Lucille Ball in four episodes of the comedy series Here's Lucy.
One of the episodes is "Lucy and Wally Cox."  (Season 2, Episode 21, Air Date: February 9, 1970). In the episode, Wally played Wally Manley, the son of Moose Manley.  The elder Manley was portrayed by Alan Hale, Jr. of Gilligan's Island.

In the years before his death, Wally was a guest star on the Bill Cosby Show (1970), Night Gallery 1971, McMillan & Wife (1971) and Alia Smith and Jones (1972), The Odd Couple (1972) and Search (1973). His appearance on Night Gallery gave him another opportunity to work with Rod Serling.  On The Odd Couple episode, he was reunited with his Mr. Peepers co-star, Tony Randall

Cox was married three times and divorced twice.  He wed his first wife, Marilyn Gennaro, on June 7, 1954. His second marriage, to Milagros Tirado, took place in 1963.  He was survived by his third wife, actress Patricia Tiernan, whom he married in 1967.  Information about his offspring is vague, contradictory and very sparse online. According to IMbd and other sources, however, he had one child with Marilyn Genaro.  The American National Biography Online asserts that he and Genaro adopted a daughter but no name is provided. Wikipedia states that he had two children with Milagros Tirado.

Wally Cox passed away on February 15, 1973, almost 41 years ago.  He died of an apparent heart attack at his home in Bel Air, California.  He was only 48 and there were some reports that the cause of his death was an overdose of sedatives, although it has been officially ruled as a heart attack.   An autopsy concluded that Cox died of a coronary occlusion (the obstruction of blood flow in a coronary artery).

According to an October 17, 2004 article in the Los Angeles Times ("When the wild one met the mild one" by Robert Welkos), few people were aware of Marlon Brando's arrival at Wally Cox's wake in the actor's Bel Air home.  Brando had "crept in through a back window at Cox's residence and hidden out in the room where Cox had died." Wally's widow, Patricia, declared that Brando "was heartbroken, of course," at Wally's death.

Celebrities from the game show The Hollywood Squares, on which Cox was a regular guest star, were at the wake.  Others in attendance were Tom and Dick Smothers, Vincent Price, Ernest Bognine and Twiggy. Patricia told Welkos, however, that "Marlon didn't come out." of the room where he was hidden.

* In The Twilight Zone episode "From Agnes - With Love," Wally Cox's character, James Elwood, uses the term "debug" when referring to the need to "debug" Agnes. This is a very early use of the expression on an American television drama, possibly the first use.

* Wally appeared in the unaired pilot of The Hollywood Squares in 1965 and remained with the NBC series until his death in 1973.  With a few exceptions, he sat in the upper left square. On the show, he was quite witty and sarcastic.