You Wanted to Know: . . . about Jane Fonda on TV. Was she ever on Perry Mason? 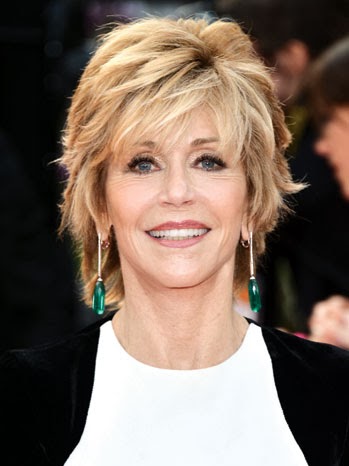 You Wanted to Know appears on TV Banter from time to time and it deals with just the fact, ma'am.  I have tracked some of the key word readers have used in their Internet searches and have discovered some questions they would like answered.  Someone wanted to know if Jane Fonda had ever appeared on the Perry Mason television series starring Raymond Burr.  Here's the answer.


Many celebrities appeared in guest roles on Perry Mason (1957-1966) but Academy Award winner Jane Fonda wasn't one of them. The answer is no.  Jane never had a role on the show.  In fact, the actress has taken very few television roles.  She played Gloria Winters in a little known 60 minute television movie entitled A String of Beads. A String of Beads aired on February 7, 1961.  Twenty years later, she appeared in another TV film, Lily: Sold Out, a 1981 comedy featuring Lily Tomlin. Tomlin had co-starred with Jane and Dolly Parton in the popular film comedy 9 to 5.

In 1982, Jane Fonda made a guest appearance on the television version of 9 to 5. She played a character named O'Neil in an episode of the series entitled "The Security Guard" (Season 2, Episode 2, Air Date: October 12, 1982).  Fonda received an Emmy for her stellar performance as Gertie Nevels. a sharecropper's wife, in The Dollmaker, a television movie that aired on the ABC network on May 13, 1984.  In the film, Gertie, a mother of five from the Kentucky Hills, uproots her children so that she can join her husband, Clovis.(Levon Helm) in Detroit, where he has found employment in a factory during World War I.  The family is reunited and settles in a shack in an industrial area of the city.

It was not until 2012, however, that Jane had a recurring guest star role on a television series.  To date, she has portrayed the character of Leona Lansing on seven episodes of The Newsroom on HBO.  Her most recent appearance as Leona occurred in a September 15. 2013 episode entitled "Election Night: Part II" (Season 2, Episode 9).


The Newsroom was created by Aaron Sorkin, who also created the hit American political drama The West Wing.  The series revolves around the happenings at the fictional Atlantis Cable News (ACN).  Jeff Daniels stars as anchorman Will McAvoy. Jane Fonda's character is the owner of ACN.  In a 2012 interview with The Huffington Post, Jane described Leona Lansing as "somewhere in between" media mogul Rupert Murdoch and her ex-husband, CNN founder Ted Turner.  When asked to comment on whether she had some inside knowledge of newsrooms, she replied, "Well, I do. Being with Ted for ten years, it helps me feel comfortable in that environment.  I know what it looks like.  I know what it feels like - it doesn't intimidate me."

Jane told The Huffington Post that The Newsroom is "a fantastic series" and that she was "proud to be in it." She stated that being a "recurring guest star" on a television show was something new to her.  She said she didn't know how to describe what she does because "I've never done a series like this before."


* HBO has officially renewed The Newsroom for a third and final season, scheduled to air in the fall of 2014.

* Last year, Fonda was nominated for an Emmy in the category of Outstanding Guest Actress in a drama for The Newsroom.  She lost out to Carrie Preston of The Good Wife.  Jeff Daniels, however, won an Emmy for Outstanding Actor in a Drama for his role in The Newsroom.

Last night’s HBO drama The Newsroom got a jolt of electricity–at last. It came from two time Oscar winner Jane Fonda, who gave an Oscar worthy performance and stole the entire season in one fell swoop. Fonda plays ACN owner Leona Lansing, and is used sparingly by show creator Aaron Sorkin. She’s nominated for an Emmy from last season (and deserves to win, hands down).

If you want to see lightning strike through a scene, then this is it. Why Fonda doesn’t get a “special guest star” credit up front when she’s on perplexes me. “The Newsroom” needs her. The show can be very whiny otherwise….