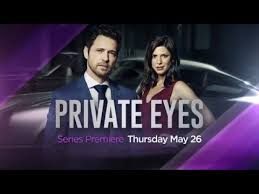 Here's some good news for Jason Priestly fans.  The Vancouver-born actor stars in a new Canadian television series on Global TV called Private Eyes. The 10-episode drama makes its debut tonight.  It was filmed entirely in Toronto and will highlight the city's neighbourhoods.  "We're shooting Toronto, for Toronto," Priestly told Global News entertainment reporter Chris Jancelewicz.  “It’s a very international, multicultural and vibrant city. So why not celebrate it?”

Priestly plays the role of Matt Shade, an ex-professional hockey player turned detective. His co-star is fellow Canadian Cindy Sampson.  Sampson, a Halifax native, portrays private investigator Angie Everett, who has inherited a detective agency from her late father.  Sampson is known for her portrayal of Lisa Braeden in the U.S. TV series Supernatural.

Rounding out the cast of Private Eyes are: Barry Flatman (Fargo and Defiance) as Shade's working class father, Don; Jordyn Negri (Warehouse 13) as Shades visually impaired daughter, Jules; Clé Bennett (Rookie Blue) as Detective Nolanm, a cop who is not particularly fond of private investigators and  Ennis Esmer (The Listner) as Detective Kurtis Mazhari, a cop who is helpful to Angie Everett.

In the premiere episode, Shade is working as a hockey scout when his top pick collapses on the ice under suspicious circumstances.  He reluctantly teams up with Angie to investigate the matter. With Shades' hockey smarts and Angie's detective skills, the two become an improbable crime fighting duo.

* Jason Priestly, best known for his portrayal of Brandon Walsh on Beverly Hills 90210, is a big hockey fan in real life.  His favourite team is the Vancouver Canucks.  Here's how he describes his passion for the game on his official website:

Straight up, I love hockey. I love to play it and love to watch it. I’m from Vancouver, BC. My team therefore is the Canucks and for the record, I like the new rules. The game is faster and I think the shooting is awesome.

*  Priestly is also a foodie.  He appeared on a wine show in Canada called Hollywood and Vines.  He created the show with his friend Terry David Mulligan, an actor and radio personality who is also from British Columbia.