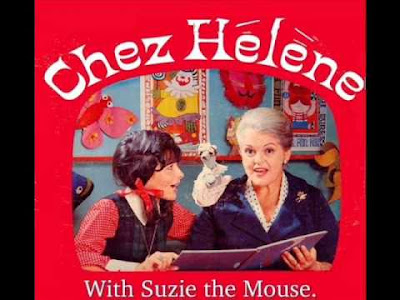 Canadian children in the 21st century could use a television show like Chez Hélène. This classic chidren's bilingual program aired for 14 seasons on CBC Television, from October 26 1959 until May 25, 1973.   I watched the show as a child and I remember it with great fondness.  It was how I and countless other English speaking Canadian youngsters learned our first words in French,  The first French word I recall from the show is "regardez" (look).  Host Hélène Baillargeon would say, "Reardez, Suzie" to a puppet named Suzie the Mouse.

Chez Hélène was a weekday program and it was only 15 minutes long.  According to a blurb on the CBC's Digital Archives, "its goal was to give English-speaking children exposure to the French language," but it sometimes served to give French-speaking children exposure to the English language. Chez Hélène had the good fortune to be broadcast between two other immensely popular Canadian children's shows - The Friendly Giant and Mr. Dressup.

It was Knowlton Nash, then chief of information programming for the CBC, who cancelled Chez Hélène in 1973.  He explained his reasoning for axing the show in a piece for The Globe and Mail. He wrote that the program was cancelled due to the Canadian version of Sesame Street, which began airing in 1972.  The Canadian Sesame Street contained five minutes of French per episode and Nash argued that it had "double the audience of Chez Hélène.  Another executive at the CBC opined that Chez Hélène was cancelled partly because it had been on the air so long.  The executive felt that it was time to end the show's life cycle. 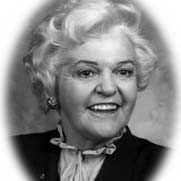 Hélène Baillargeon, a singer and folklorist from Quebec, hosted the program.  Hélène was born at St.-Martin-de-Beauce, south of Quebec City, on August 28, 1916.  According to The Canadian Encyclopedia, she studied voice in Quebec City from 1935 to 1938, in New York from 1939 to 1940 with Mrs. Franz Rupp, and in Montreal from 1940 to 1944 with prominent Canadian composer and pianist Alfred La Liberté (1882-1952).  It was La Liberté who introduced her to folk music.

In 1944, Hélène wed André Côté, a Montreal crown attorney.  From 1950 to 1955, she worked as a researcher with folklorist and anthropologist Marius Barbeau (1883-1969) at The National Museum of Man in Ottawa.  During the 1950s, she sang on many CBC French and English radio and television broadcasts.

In 1978, Hélène Baillargeon appeared on CBC's 90 Minutes Live.  Host Peter Gzowski introduced her as a "Canaidan heroine."  Hélène modestly protested that the description was "much too much." 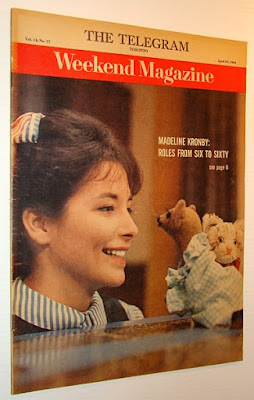 Madeline Louise Kronby was Hélène's sidekick, was a versatile actress who played the role of Debbie in the 1959 independent Canadian film  A Cool Sound from Hell.  She portrayed the bilingual "Louise" on Chez Hélène.  After Chez Hélène went off the air, Madeline provided the voice of Pic in the English language version of Radio-Canada's Nic and Pic, a children's program about puppet mice who travel around the world in their balloon (in 1975, Nic and Pic was dubbed for the English language CBC network).

I can't forget my favourite character on Chez Hélène, the delightful Suzie the Mouse. Suzie, an English-speaking puppet, was voiced by Florence Shreiber and Corinne Orr.