So now we've met Brittany . . . er . . . Bethany, the new character on Y&R.  Bad girl Bethany is going to be a real troublenmaker.  Billy Abbot had better watch out.  She's nothing but bad news and she loves to stir the pot.  She's already tried to tempt the gambling addict to join a poker game.

Jill has returned to Genoa City and she is not pleased about what has transpired during her absence. After a run-in with Hilary, in which the two played verbal volleyball, she decided to pay a visit to her wayward son, only to find him entertaining Bethany. She's not too happy about how messed up her Billy's life has become, although she doesn't know the whole story.  If she had any inkling about her son and Phyllis, she'd be even more distraught and very livid.  She'd be fit to be tied.  As it as, she's upset because he appears to be spending his time drinking and cavorting with bimbos.  Imagine if she knew the truth about Billy and his sister-in-law!

I couldn't help smiling when Jill railed against the new decor in the erstwhile Chancellor mansion.  She was so spot-on.  She didn't mince words either.  She referred to the paint colour as "hideous" and "mud grey."  She expressed her disappointment that Billy had turned the Chancellor estate into a "man cave," a man-child playground."  "Nothing of Katherine is left," she lamented."

Jill didn't stop there, though.  She chided her son, telling him that he needed a "kick in the pants and a shove in the right direction.  "You're an adult," she said, "but you've never grown up."  Billy Boy looked quite sheepish and somewhat remorseful when his mother departed.

Is there any character on Y&R more naive than Meredith Gates?  She is a doctor.  She is highly educated.  Why can't she not see through Victor Newman?  He plays her like a violin and she just can't resist his dubious charms.  Doesn't she realize how he's using her and manipulating her to get out of prison?  Is she so mesmerized by him that she doesn't care about his motives?  Is she so under his spell that she's willing to abandon her professional ethics?  Is she so entranced by his kisses that she's willing to jeopardize her career and her reputation for his sake.  Sadly, it would appear so.

Did Adam Newman kill Constance Bingham or has he been framed?  If Adam didn't kill Constance, then who did?  Adam has committed some wicked deeds in the past, but did he poison a disabled older woman?  There has been some online speculation that Sage actually murdered Constance Bingham. I don't buy that theory at all.  Victor must be involved in some way.  That man has his   grubby hands in almost all of the most reprehensible acts committed in Genoa City.  Okay, so he had nothing to do with Abby falling down the stairs!


If you have any comments on Y&R, please email them to me with "Viewer Forum in the subject line. I will be happy to publish your comments and reply to them  You do not have to use your real name.

Here are some comments from Maria in Manhattan, New York, NewYork.

* Dr Gates (Alicia Coppola) was on another soap and saw pics of her  She looks like the actress from Big Fat Greek Wedding (Nia Vardalos).  It will be a Victor and Dr Gates wedding!   Opa!

* Jack will have a fling with Hilary when he finds out about Billy and Phyllis.

* Soon you  will see Dr. Gates comes out of her nerdy shell around Victor, Her change will be similar to when Sandra Bullock was prepping her role in Miss Congeniality.

* Little Sully deserves a Baby Emmy.  Do you notice how calm and quiet he is ....... He's
adorable.  Will be glad when the story line with Sharon and Dylan is over.  Sharon needs Mr. Kitty, not Dylan.

* And  finally, Victoria and the bartender ...... Soon, the scandal will be all over the boardroom and bedroom.

Yes, Alicia Coppola was on another soap.  She played Lorna Devon on Another World from 1991 to 1993.

Well, Maria, here are photos of Dr Gates (Alicia Coppola) and Nia Vardalos.  I wouldn't say they are dead ringers, but I see a resemblance, especially around the eyes and eyebrows.  What do you think, readers and fans?

Perhaps there will be a Victor and Meridith Gates wedding.  Who knows what the writers have in mind.  That could be the reason why Nikki is divorcing "The Moustache."  Dr. Gates seems as if she is ready to go rogue.  She could throw away her career and reputation for Victor's sake,  Maybe she'll marry him secretly and help him escape from prison.  It sounds over the top, but I wouldn't put anything past head writer Charles Pratt and company.

I think you may be right about Jack and Hillary hooking up.  They may become vulnerable to each other at the same time.  When Jack discovers the truth about Phyllis and Billy, he will feel angry and betrayed.  Meanwhile, Hilary's marriage to Devon doesn't appear too solid.  He has been been constantly forced to defend her and has been turned off by her selfishness and her conniving ways. Lily and Cane have come up with a strategy to stop Hilary in her tracks. They have decided to try to convince Devon to come on their side. Lily and Cane  reckon that Hilary will stop blackmailing Neil if she thinks it will deprive her of her husband's billions.  However, if Hilary believes that Devon has rejected her, she may turn to Jack for solace.  It hasn't escaped Lily's notice that Hilary is always smiling at Jack and trying to impress him.  When she pointed this out to Devon, he found the notion ridiculous. I disagree..  I think Lily's right.  Gold digger Hilary would love to latch on to an Abbott.

You are definitely right about baby Sully/Christian.  He really is adorable, an absolutely delightful child.  The kid is a born actor too! I noticed the expression on his little face when Sage died.

Here's a little treat for you, Maria, and for all the other baby Sully fans - a photo of the little guy with Sage (Kelly Sullivan). 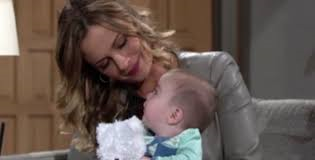 As I mentioned in the last edition of Y&R Report, Chrishell Stause (Brthany) is the girlfriend of Justin Hartley (Adam Newman).  Chrishell  is also good friends with Melissa Claire Egan, who plays Justin's onscreen wife, Chelsea, on the Y&R.  The two women have been friends since they were castmates on All My Children, where Melissa played Annie and Chrishell portrayed Amanda.

Who killed Constance Bingham, played by actress Sally Kellerman of M*A*S*H fame.  Who is responsible for the foul deed?  Was it Adam?  Sage?  Is Victor behind the murder?  (By the way, Sally Kellerman will turn 79 years old on June 2nd.  Eric Braeden (Victor) turned 75 in April.  He is only four years younger than Kellerman.  Yet his character is seen romancing a prison doctor played by 48-year-old Alicia Coppola. Amelia Heinle, who portrays Victor's daughter, Victoria, is 43 years old . . . just giving you the facts). 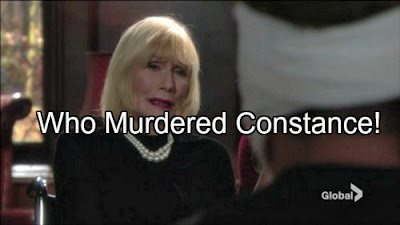 Do you think Adam killed Constance?