Well fans, Jack Abbott has declared that the old Jack is back!  He's bitter and cynical and very unhappy.  I don't mind if he stays that way for a while, but I hope it doesn't last too long.  It can get tiresome.  Eventually, "Smiling Jack" should return.  I don't have much sympathy for Phyllis, though.  She is the author of her own misfortune.  Jack may take her back someday, but I can't see it happening anytime soon.

Even though Justin Hartley has left Y&R and Adam Newman is presumed dead, that doesn't mean we've seen the last of the Adam character.  He could easily turn up alive (this is a soap after all). That's why rumours abound online that Michael Muhney will eventually return to the show as Adam.  As of this writing, the rumours have not been confirmed or denied by Muhney or anyone at Y&R.  If Adam does turn up alive, it may not be for a while.  I really don't want a new actor playing the role.  It would only work for me if Michael Muhney came back or Justin Harltley returned.

Muhney recently underwent a skin biopsy.  Fortunately, he does not have skin caner.  However, after the surgery, he was left with 10 stitches and a bandage on his head.  He tweeted the following: “Wear your sunscreen kids. #noskincancer Had surgery today. Ten stitches. Yikes.”

We all know that soaps distort time and that some characters age quickly.  However, Chelsea has just lost Adam, the love of her life.  It's too soon to be matching her up with Nick or anyone else.  I don't even think she and Nick have much chemistry.  It seems so contrived, as if they had to match Chelsea up with Adam's brother to cause future conflict. Sharon and Dylan will break up when Dylan finds out about Sharon's secrets and lies. The needy Sharon will seek a male shoulder to cry on.  She will turn to Nick in her moment of despair.  That means that Sharon will do everything in her power to come between her ex and Chelsea.

I really enjoyed Faith's birthday scenes.  I particularly enjoyed Victor Newman's rendition of "Happy Birthday."  I think that's the first I've heard him sing.  Of course, he also gifted his granddaughter. with a stock certificate and her own pony.  She's not very spoiled, is she?  Her dress was even a Chelsea.2 original. Wow!  Actually, Faith is a sweet and intelligent little girl.  Unfortunately, with Victor Newman for a grandfather and her mixed-up family life, I predict that she will be a very troubled teen.

Now that Sally Sussman is back as head writer, here's further evidence that The Young and the Restless is trying to return to its erstwhile glory.  The CBS daytime drama has rehired former top scribe Kay Alden as well.  Alden began as a script writer back in 1973 and she became head writer in 1998 when co-creator Bill Bell retired.  Alden last wrote for Y&R in 2006.  This time she is returning as a story consultant.

Sussman is trying to focus on Y&R's core characters and core storylines and her return couldn't come at a more opportune time.  The show really  needs a shake-up.  The departure of the popular Justin Hartley has hurt the show immensely and the show had dismal ratings for the week of September 5 through September 9 with a loss of 136,000 viewers.  It also tied its all-time low with younger viewers in the 18-49 age range.

Are the writers of Y&R toying with the idea that it's better to tear Billy away from Phyllis to cause trouble between Victoria and Travis.  It would also enrage his ex father-in-law Victor Newman.  Although Victor is being cordial with Travis, he really believes no one is "good enough" for his princess daughter Victoria.

On another note, my friends and I are really enjoying watching Justin Hartley on the new drama This Is Us.  His departure was a huge loss to Y&R.  It appears that things will develop between Chelsea and Nick and then Sully's true paternity will be revealed sending Dylan, Sharon, Chelsea and Nick into a tailspin.

Yes, Fifi, I also think Victor Newman is going to come between Victoria and Travis.  He has already offered Travis a job at Newman Enterprises,  Although, Travis initially turned down Victor's offer, the Black Knight, as usual, couldn't let the matter rest.  He is relentless when it comes to getting what he wants.  He eventually persuaded Travis to take a position at Newman and you can be sure that he will continue to interfere in Travis' relationship with Victoria.  "The Moustache" has meddled in every relationship that Victoria has ever had.  He has also caused every breakup she has ever had.  He may not want Victoria with that "useless Billy Boy Abbott," but he doesn't really want her with Travis either.  The day will come when he will call Travis a "punk" too.  Oh yes, Victor has already established the pattern with his granddaughter Summer, his junior princess.  He made sure that "The Snowflake" broke up with Luca Santori.

It is evident that Billy is becoming more and more jealous of Travis.  It also seems that Travis is not as perfect as he appears.  Billy Boy may be right.  "The Blond One" may have a skeleton or two in his closet.  After all, he didn't have enough will power to resist Victor's job offer.  There is a lot we still don't know about his past.  It will all be revealed in due time.  For example, Travis told Victoria that he had been in love once before.  Will more come of that?  Will the woman from Travis' past make an appearance in Genoa City?  I also wonder if there is more to the story of why he suddenly decided to leave his position as a hotshot Wall Street mogul in New York.  He claims he wanted to try something new and that he was tired of that rat race.  So, he moved to Genoa City and bought a bar.  I wonder if that's all there is to it.

When Sully's true paternity is revealed, Dylan, Sharon, Nick and Chelsea will definitely go into a tailspin.  Don't forget Faith, too. She'll freak out when the truth comes out.  I think that Dylan will be the most upset.  Of course, Nick will be upset too.  He'll also be pleased that Sully is still alive. He won't be too happy to find out that Adam is Sully's father, though.  However, I don't think he'll discover that secret until later, possibly much later.

Here are some comments from CC in Etobicoke:


After watching a couple of episodes of This Is Us,  Justin Hartley's new prime time show, I am hoping to see the return of Adam on Y&R.  I don't think the show is the vehicle to success as predicted.

Maybe Adam's return will happen in time for the November sweeps.  Before that can happen it looks like the writers will have to get us through the sparks between Nick and Chelsea to set up a rivalry between brothers Adam and Nick for Chelsea's affections.


It's time to out Sharon about Sully, and Chloe about her role of revenge on Adam.

I have to admit, CC, that I have not watched an episode of This Is Us yet.  I've been busy and just haven't gotten around to it.  However, I do intend to catch up with it as soon as possible.  All I can say is that as long as the ratings for This Is Us remain high, Justin Hartley will not be returning to Y&R.  So far, the show is doing well.  In fact, it has been given a full 18-episode order.  I doubt he'll be returning to daytime even if the show is not the success it's expected to be. Hartley's  a good actor an he's in high demand.  He would have no trouble finding other prime time roles.  He may even try to launch a film career.

I think that the Adam character may return at some point, most likely with another actor replacing Justin Hartley .  It may happen, as you suggest, in time for the November sweeps.  The reason I think Adam may come back is that a relationship between Nick and Chelsea appears to be brewing.  As you point out, this sets up a rivalry between Adam and Nick over Chelsea.  On the other hand, that seems like such an obvious plotline.  A rivalry between two brothers is a very common storyline on soaps.  I hope they come up with something more original than that, or at least put a different twist on it.

By the way, Melissa Claire Egan, who portrays Chelsea, has weighed in with her opinion. She doubts the role of Adam will be recast.  "I really don't think they'll [do another story in which Adam returns with a new face] and I'm not just saying that.  I truly don't think there's going to be another Adam... but who knows? As of now, I don't think there is a plan to [recast him]."  Hmmm.

I completely agree with you that Sharon's secret about Sully should be exposed soon.  It's dragged on too long.  Fortunately, you can expect the truth to come out really soon.  All the previews and Internet spoilers point in that direction.  As for Chloe, I think it's going to take longer for her actions to be revealed.  I'm amazed how she's been able to take on Victor for so long.

Patty Williams (Stacy Haiduk) is back

Stacy Haiduk is back for another stint as Patty Williams.  That means big trouble for Sharon.  Patty Cakes knows Sharon's dirty little secret.  You can be sure that the cat is finally going to be out of the bag soon.  You can also be sure that it will mean the end for Dylan and Sharon.

According to Soap Central, Y&R has put out a casting call for a new character named "Marnie."  "Marnie" will be a recurring characcter.  She is described as "a beautiful, lively, easy-going woman in her later 20s /early 30s."  I wonder if she could be the woman from Travis' past. 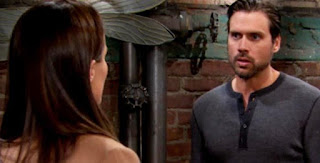 What do you think, fans, about a Nick and Chelsea romance, assuming Nick is done with Sharon forever?

How do you feel about Nick and Chelsea being together?

That's all for now.  Please remember that the next edition of Y&R Report will appear in this space on Saturday, October 15, 2016.