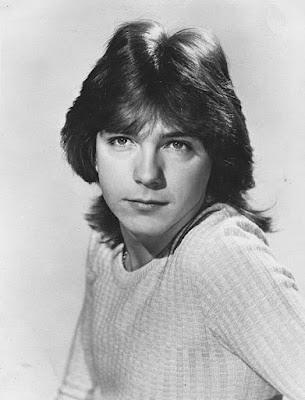 David Cassidy was one of the foremost teen idols of the 1970s.  As Keith Partridge on The Partridge Family, he was a heartthrob to young girls of that generation.  From 1970 to 1973, he starred alongside his real life stepmother, Shirley Jones, in the popular musical sitcom about a family band headed by a widowed mother (Jones).  David and the Partridge Family had a huge hit in 1970 with the song "I Think I Love You," featuring Cassidy on lead vocals and Shirley Jones on background vocals.  David's face and his long, flowing hair graced the covers of countless teen magazines. According to IMDb, at the peak of his popularity, he was the world's highest paid live entertainer and he had the largest official fan club in pop history, larger than those of Elvis Presley and The Beatles.

After The Partridge Family went off the air, David continued successfully with his music and acting career. For example, he guest-starred in a 1978 episode of Police Story, "A Chance to Live" (Season 5 Episode 7, Air Date: May 28, 1978), for which he earned an Emmy nomination.  In the episode, he played Officer Dan Shay who operated undercover for the narcotics unit at a high school.  Cassidy's most recent television role was in a 2013 episode of CSI: Crime Scene Investigation entitled "Last Woman Standing" (Season 13, Episode 16, Air Date: February 27, 2013). He also portrayed a former teen heartthrob named David Gallagher in the short-lived 2009 comedy Ruby & the Rockits.

In recent years, however, David's personal life has been plagued with problems and instability.  He has had to challenge a number of demons and it hasn't been easy.

David also has a daughter, Katherine Evelyn Anita "Katie" Cassidy (born November 25, 1986) from his relationship with Sherry Williams Benedon.  Katie, an actress, had a big breakthrough in 2012 when she landed the role of Laurel Lance/Black Canary, one of the main characters on the TV series Arrow.


In 2008, David admitted publicly that he had a problem with alcohol.  In 2010, the singer was charged with driving under the influence.  In August 2013 and January 2014, he was again charged with impaired driving.  A month after his third DUI charge, Sue Shifrin, his third wife, filed for divorce after 23 years of marriage and 28 years together.  In a February 12, 2015 article in the Los Angeles Times, Sue is quoted as saying that the breakup had been brewing for a time and that she was "truly heartbroken" about it..

In 2014, David spoke openly to talk show host Piers Morgan about his alcoholism.  He said, "If I take another drink, I'm going to die, physically, mentally, emotionally, spiritually. I'm dead.  You know, they say it's a slippery slope... It's not a slippery slope. It's from 12:00 to 6:00 on the clock and the whole face is ice.  One sip, one drink, because there is no such a thing, not to an alcoholic.  You have one and you're - you're done. I'd be done.”

Cassidy entered a no-contest plea to his January, 2014 arrest on suspicion of DUI near the Los Angeles International Airport.  He was sentenced to 90 days live-in rehab and a 60 mouth probation.  He received treatment at a Florida rehabilitation facility,

In February of 2015, following his divorce and his stint in rehab, David Cassidy filed for Chapter 11 bankruptcy protection in Florida.   Documents obtained by the Los Angeles Times indicated he had assets and debt of up to $10  million and, according to TMZ, he owed $39,102 in credit card debt as well as a $292,598 mortgage against his house and a long list of attorney fees.  The documents also showed that David had homes in Fort Lauderdale, Florida and in Saratoga Springs, New York and that he was involved in a legal dispute over thoroughbred horses he co-owned.

In an email statement from his publicist, Cassidy stated: "I am gong through bankruptcy proceedings at the moment.  This is necessary for practical reasons to reorganize my life as I go through divorce and to restructure my finances."


The following appears on David's official website.  It is dated February 7, 2017.

After reading the messages sent to him over the last few days, David sends this message to his fans:

I will always be eternally grateful for the love and support you’ve shown me. I still love very much to play and perform live. But it’s much more difficult for me now.
I’m not going to vanish or disappear forever. I’ll be able to communicate much more through my website and my Facebook page. As you can imagine this has been truthfully THE MOST DIFFICULT DECISION I HAVE EVER MADE IN MY ENTIRE LIFE.
I’m eternally grateful to each and every single one of you.
I’m going to play live, everywhere around North America, through 2017. I hope you will find a way to come and be part of my celebration!
XO DC

Sadly, David's problems continue to mount.  At a February 18 show in Agoura Hills, California, he struggled to remember the lyrics to songs he has sung for years.  His fans became worried when he slurred his words and told rambling stories during the performance.  He even tumbled as he was playing an instrumental break and staggered off the edge of the stage.  There was speculation that he was drunk.

On Monday, February 20, David revealed the heartbreaking news to People magazine that he is fighting dementia.  He said he feared he would end up this way because of his family history.  His grandfather battled the affliction and his mother, Evelyn Ward, died of Alzheimer's in 2013 at the age of 89,  In 2011, while Ward was suffering from the disease, Cassidy recorded a public service announcement in which he advocated for Alzheimer's research and prevention.

Due to his condition, David has decided to stop touring as a musician.  "I want to focus on what I am, who I am and how I've been without any distractions," he told People.  "I want to love.  I want to enjoy life," 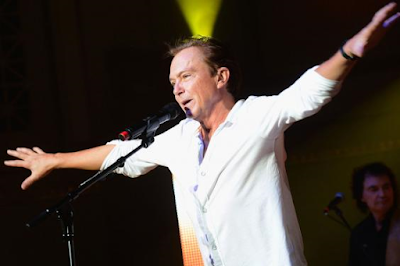 * According to David's IMDb biography, he did not know until he was cast as Keith Partridge that his real life stepmother was set to play his TV mother, Shirley Partridge.


EDITOR'S UPDATE (November 29, 2017): David Cassidy died on November 21, 2017 in Fort Lauderdale, Florida at the age of 67.  On November 18, it was announced that he had been hospitalized due to liver and kidney failure.  He was critically ill in a medically induced coma.  However, he came out of the coma two days later and remained in critical but stable condition..  Doctors hoped he would remain stable until they could perform a liver transplant.  Before a liver became available, he died from liver failure.  His daughter Katie stated that his last words were, "So much wasted time."
Posted by Joanne at 3:48 PM