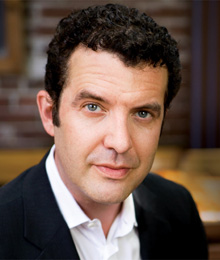 Comedian Rick Mercer has announced that the 15th season of CBC-TV's The Mercer Report will be his last.  He posted his announcement yesterday in a specially taped rant to his 1.3 million followers on Twitter.  After more than 270 episodes, the show will end in March and Rick is determined to end it on his own terms.

For the past 25 years, the man with the mischievous smile has been a solid fixture on the CBC.  He was only 23 years old when he first appeared on This Hour Has 22 Minutes/.  After eight seasons, he left 22 Minutes and embarked on five-season run on the sitcom Made in Canada.  His Talking To Americans comedy specials achieved high ratings, but they ceased after the terrorist attacks of September 11, 2001

Although Mercer is convinced that starring in his own satirical comedy program is still "the best job in the world," he feels that the time has come to pull the curtain on The Mercer Report.  In many ways," he told Stephanie vanKampen of CBC News, "I could do it forever." But as he pointed out, "things don't last forever and the shows that I respect the most, they wrap them up on their own terms and that's exactly what I'm doing."  Rick told The Canadian Press that he didn't have a "seismic event or epiphany that this should be the end." He just has a sense that he's ready to move on after one more season.

The Mercer Report premiered in 2004 as Rick Mercer's Monday Report.  Rick, a native of St. John's, Newfoundland, has visited almost every nook and cranny of Canada and has taken viewers to events from sea to sea.  He has played golf with Anne Murray, skinny-dipped with Bob Rae and has been read a bedtime story by former Prime Minister Stephen Harper.  He has also participated in numerous daredevil stunts.  This summer, for example, he hung off the side of  Prince Edward Island's Confederation Bridge with a maintenance crew.  It's a wonder that he has never seriously injured himself!

In his interview with The Canadian Press, Rick vowed that he's not leaving The Mercer Report to write a book, obtain a raise in salary, spend time with his family or accept a Senate appointment.  He also promised not to grow a bushy beard like David Letterman.  He made it clear that right now his focus is on making the final season of The Mercer Report the best one ever.

So, what does the future hold for the intrepid 47-year-old Newfoundlander?  Well, it's too early to say what's next for Rick.  He apparently needs more time to decide.  However, if he has any political aspirations, maybe he'll run for seat in the House of Commons (I can picture him as a Newfoundland MP).  If he chooses not to throw his hat into the political arena, though, perhaps he'll appear on a new television show. He's certainly too young and talented to retire.

In the meantime, I and many other viewers will miss his heartfelt rants along a Toronto alleyway festooned with graffiti art.  He's ranted on a plethora of subjects from the weather to the length of elections to bullying.  His tirades have included such diverse topics as imported pandas, escalator protocol and airport security.

Enjoy some rest and relation, Rick, while you make up your mind.  Don't stay away too long, though, because Canada needs more Rick Mercer.