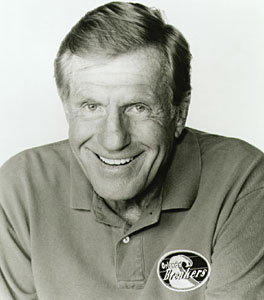 Jerry Van Dyke passed away on January 5, 2018 at the age of 86.  Although Jerry was initially overshadowed by the success of his older brother Dick, he managed to carve out an independent career of his own.  He was able to create his own niche in the world of comedy.  The staff of MeTV posted the following assessment of Jerry's career on January 8th:

It has been said that Jerry Van Dyke lived in the shadow of his older brother.  That sells him short.  While Jerry may not have reached the same level of headlining Hollywood fame, he worked in his own spotlight.  In a way, he used his perception to his advantage.  Jerry brilliantly portrayed second fiddles, dimwits, the insecure, and hard-luck guys.- all while oozing charm.  He could make a sad sack seem like a ray of light.

Dick of course, became a famous comedian, actor, singer, dancer, writer and producer.  However, his younger sibling possessed special talents of his own.  Jerry had an aptitude for stand-up comedy and he was a skilled four-string banjo player.  He pursued stand-up while attending Danville High School and developed a routine, including banjo-playing.  He took his act to night clubs and dives in the Deep South.  For a time he was a regular on the Playboy club circuit and then an opening act in showrooms in Las Vegas, Lake Tahoe and Atlantic City.

In 1952, during the Korean War, Jerry Van Dyke enlisted in the U.S. Air Force Tops in Blue and entertained the troops with his Special Services shows.  In the mid-1950s, he was employed at WTHI-TV in Terre Haute, Indiana.  He had his own show, a popular half-hour 5 p.m.variety program called The Jerry Van Dyke Show.  Jerry played the banjo and the drums and performed comedy skits,  using a newsman as the straight man in his skits.  He also served as a disc jockey at the station.

Jerry made his  television acting debut in 1962 in two consecutive episodes in Season One of the classic Dick Van Dyke Show - "I Am My Brother's Keeper" and "The Sleeping Brother."  He played Stacey Petrie, the shy, sleepwalking, banjo-playing brother of Rob Petrie, Dick's character on the series.  (In 1965, Jerry reprised his role as Stacey Petrie in a two-part episode). 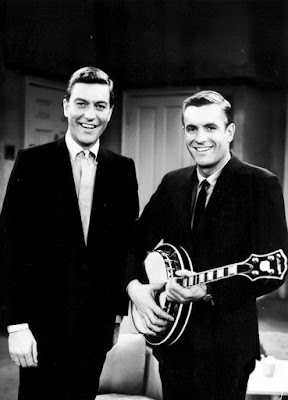 After Jerry's 1962 appearances on The Dick Van Dyke Show and some performances onThe Ed Sullivan Show, CBS cast him as as a regular on The Judy Garland Show.  In 1963, he became host of the game show Picture This.  That same year, he was a guest star on an episode of the anthology series GE True, hosted by Jack Webb.  When The Judy Garland Show was revamped, Jerry left the series.

Jerry Van Dyke made a fateful decision in 1964.  He turned down a lead role in Gilligan's Island, a comedy about 7 castaways stranded on a tropical island.  Sherwood Schwartz, the creator of Gilligan's Island and The Brady Bunch, wrote about offering the part to Jerry.  In his book, Inside Gilligan's Island, Schwartz stated that "Jerry seemed just right as Gilligan."  According to Schwartz, he phoned the actor, had lunch with him, discussed the project and gave him the script.  Jerry said he would consider it and talk it over with his agent.  "But," writes Schwartz, "Jerry's agent was Rosey - George Rosenberg.  Would he allow the promising young comedy actor the lead role in a series he himself didn't want to represent?  Of course not!

The part of Gilligan went to Bob Denver instead.  Although Gilligan's Island was panned by TV critics, it ran from 1964 to 1967 on CBS.  It became a huge hit with fans and developed a cult following during decades of syndication.

In 1965, Jerry Van Dyke appeared in an episode of The Andy Griffith Show as a banjo-playing deputy sheriff named Jerry.  In the episode, entitled "Banjo-Playing Deputy" (Season 5, Episode 32, Air Date: May 3, 1965), Jerry fills in for Barney Fife, the regular deputy.  Don Knotts, who portrayed Barney, had left the show in order to pursue a film career.

Jerry never became part of the permanent cast of The Andy Griffith Show. Instead he opted to star in My Mother the Car," a fantasy sitcom about a lawyer named David Crabtree (played by Jerry) who purchases an antique car (a 1928 Porter), which turns out to be the reincarnation of his deceased mother.  David's mother, Gladys, was voiced by Ann Sothern.

Critics savaged My Mother the Car and it has been labelled one of the worst American sitcoms ever. The show aired on NBC for a single season between September 14, 1965 and April 5, 1966.  Thirty episodes of the series were produced.  Unlike Gilligan's Island, though, it never found an audience.

To be fair, Jerry Van Dyke had no way of knowing that Gilligan's Island was going to be such an enormous hit.  "This My Mother the Car script," he declared in a November 15, 1993 People magaazine article," read like Neil Simon compared to the Gilligan's Island script."  "I became known as the guy who did the worst show in the history of television," he told writer Tom Gliatto.  "At least it took the edge off being Dick Van Dyke's brother," he quipped.

Unfortunately, Jerry Van Dyke gained a reputation for choosing clunkers.  In 1967, Jerry starred in another short-lived comedy series called Accidental Family.  In Accidental Family, he played the role of Jerry Webster, a widowed comedian who purchases a farm where he can raise his son while not on the professional tour circuit.  That same year, he also appeared as Howie in an episode the Marlo Thomas sitsom That Girl.  In 1968, Jerry had guest role in the Jim Nabors sitcom Gomer Pyle, USMC.  He played a nightclub comedian named Jerry Ball in an episode of the series entitled "Gomer and the Night Club Comic" (Season 4, Episode 27, Air Date: March 22, 1968).

By the 1970s, Jerry's television career was on the downswing. As the decade began, he found himself co-starring with Andy Griffith in an ill-fated drama/comedy called Headmaster.  The series, about a headmaster at elite California private school, only lasted for 13 episodes in 1970.  So, Jerry decided to return to stand-up comedy, spending much of the decade performing in Playboy Clubs and cruise ships, and headlining in Las Vegas and Reno.

In 1979, Jerry Van Dyke was a member of the cast of a short-lived comedy called 13 Queen's Boulevard.  Only nine episodes of the series about the residents of a Queen's, New York apartment complex were ever produced.  Jerry portrayed a character named Steven Winters.

In the early 1980s, Jerry made guest appearances on TV series such as Fantasy Island (1981), The Love Boat (1982) and Newhart (1983).  In 1986, he played the role of Tucker Agajanian in Fresno, a five-part min-series that parodied prime time soap operas such as Dallas and Dynasty.  In 1988, he portrayed Mr. Merken in an episode of Charles in Charge, a sitcom starring Scott Baio.

In 1982, Jerry Van Dyke suffered a major disappointment when he failed to land the role of George Utley, the dim-witted handyman on Newhart, a hit comedy in which Bob Newhart portrayed a Vermont innkeeper.  Although the part of George was originally created for Jerry, it went to Tom Poston instead.  "We were living in a house that was being foreclosed on," Jerry told People magazine in 1993.  "I thought that show would save my life."

As the 1980s drew to a close, Jerry was cast in his most memorable TV role, the one for which he is known to younger viewers,  From 1989 to 1997, he played Assistant Coach Luther Van Dam, opposite Craig T. Nelson.on the sitcom Coach.  The not-too-bight Van Dam worked with Coach Hayden Fox (Nelson) as they oversaw a college football team, the fictional Minnesota State University Screaming Eagles.  Jerry's role on Coach earned him four Emmy nominations.

From 2010 to 2015, Jerry played the role of Tag Spence in eight episodes of the The Middle, an ABC comedy starring Patricia Heaton of Everybody Loves Raymond fame.  Dick Van Dyke appeared in a 2015 episode of the series entitled "Two of a Kind" (Season 6, Episode 21, Air Date: April 22, 2015) alongside Jerry.  Dick portrayed Dutch Spence, Jerry's character's estranged brother.

Jerry Van Dyke was married twice.  He married his high school sweetheart, Carol Jean Johnson, on January 22, 1957.  They had three children, daughters Jerri Lynn and Kelly Jean and a son named Ronald.  After a lengthy separation, Jerry and Carol divorced in 1974.

On December 21, 1977, Jerry married his second wife, Shirley Ann Jones (not the singer/actress of The Partridge Family).  The pair met in 1970 while Jerry was performing at a supper club in Hot Springs, Arkansas and she was a local country singer.

On November 17, 1991, Jerry's family suffered a terrible tragedy when his daughter Kelly Jean (born June 5, 1958) reportedly committed suicide in Los Angeles.  The 33-year-old was found hanged after a struggle with substance abuse issues.  Kelly Jean was an actress who performed in adult films.  She had a history of drug problems and had been to rehab and her relationship with her father had been strained.  In his 1993 interview with People, Jerry said he had had no idea how desperate she was.

Jerry died of heart failure at his ranch near Hot Springs, Arizona.  His wife, Shirley Ann,, told CNN that Jerry never fully recovered from a "horrible car accident." a couple of years ago in which he was seriously injured.

* Jerry Van Dyke was an enthusiastic poker player.  He hosted a number of poker tournaments for ESPN during the late 1900s and early 2000s.

* 92-year-old Dick Van Dyke visited his ailing brother over the Christmas holidays this year.  It's been a difficult time for Dick because Rose Marie, his beloved colleague from The Dick Van Dyke Show, passed away on December 28, 2017 at the age of 94.