How Stanley and Barry Livingston (Chip and Ernie of My Three Sons): Survived Child Stardom 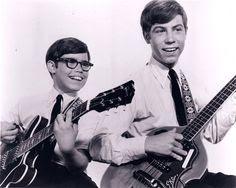 Stanley Bernard Livingston and Barry Gordon Livingston were both born in Los Angeles, California.  Stanley came into the world on November 24, 1950.  His brother Barry followed on December 17, 1953.  They are the sons of Lillian Rochelle "Marilyn" Palyash and Hilliard Livingston.

Stanley played Richard "Chip" Douglas, the third son of Steve Douglas (Fred  MacMurray) on the long-running sitcom My Three Sons.  Stanley and Fred MacMurray were the only cast members to appear throughout the entire 12-year run of the series, from 1960 to 1972.  The two played father and son in all 380 episodes and Fred became a mentor to Stan.

Of his role as Chip Douglas, IMDb.com quotes Stanley Livingston as saying, "The name Chip Douglas is probably going to be on my tombstone.  That's neither good nor bad.  It's just a fact of life." 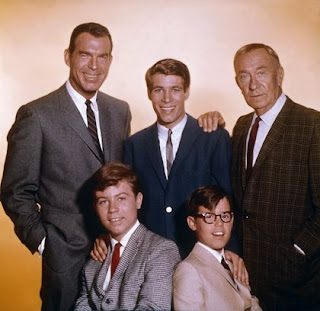 Stanley Livingston launched his acting career with small, uncredited parts in films such as The Bonnie Parker Story (1958) and Rally Round the Flag (1958). He played one of the children, Gabriel Mackay, in 1960's  Please Don't Eat the Daisies, starring Doris Day and David Niven.  Stanley also appeared in a 1959 episode of the  short-lived TV series Peck's Bad Girls and a 1960 episode of The George Gobel Show (Season 6, Episode 7).  From 1958 until 1963, Stanley portrayed a neighbourhood child named "Stanley" in 9 episodes of The Adventures of Ozzie and Harriet.  He had an uncredited role as Prescott Rawlings in a 1962 episode of How the West Was Won.

After My Three Sons went off the air in 1972, Stanley's acting career never really blossomed.  His television roles were sporadic.  In a 1973 episode of Room 222, he played Jackie O'Farrell, a former child star,who doesn't quite fit in at Walt Whitman High School,   The episode is entitled "A Hairy Escape." (Season 4, Episode 21, Air Date: February 23 1973).  Stan also guest-starred in a 1974 episode of Lucas Tanner, a short-lived TV drama starring David Hartman.

In addition to his career as an actor, Stan Livingston, has done extensive work behind the camera.  He has written and produced many commercials, music videos and educational programs.  He has also directed children's programming for PBS.

Stanley has been married twice.  He was just 18 when he wed his first wife, Sandra L. Goble, a go-go-dancer.  The marriage last for six years, from 1968 until 1974.  Th couple had one child, a daughter named Samantha, and the marriage ended in divorce.  Of his first marriage, Stanley told People magazine about Fred MacMurray's reaction:  "He spoke to me about it a couple of times.  You could tell he didn't approve."


At the age of five, Barry Livingston was cast in the role of Paul Newman's son in the 1958 film Rally 'Round the Flag, Boys.  In an interview for FOX411'S Pop Tart's column, Barry related how, during the filming of the movie, his eyes began to "ping-pong around his head" because he wasn't wearing glasses at the time.  He couldn't keep his eyes still and there were fears he was having a seizure.  The youngster was rushed to the hospital where he was diagnosed with having astigmatism.  A day or two later, he  returned to the set wearing his glasses and was "promptly fired by the producer, who said he didn't think Paul Neman's son in the movie would be wearing glasses."

Barry Livingston was one of the rare bespectacled child actors, but he didn't let his glasses prevent him from attaining success.  He began his television career in the early 1960s and he usually portrayed "the kid next door."  His first regular TV role was on the The Adventures of Ozzie and Harriet.  From 1960 to 1963, he played a neighbourhood child named Barry Martin on the popular family comedy.

In 1962, Barry appeared in an episode of The Dick Van Dyke Show..  The episode is  entitled "The Talented Neighborhood" (Season 1, Episode 19, Air Date: January 31, 1962).  In the episode, "The Alan Brady Show" conducts it annual talent search for the most gifted youngster.  Barry portrayed Philip Mathias, one of the children trying to win the talent contest.

Barry also played Arnold Mooney, the son of Lucy's boss, Theodore J. Mooney (Gale Gordon) in two episodes of The Lucy Show, starring Lucille Ball.  The episodes are "Lucy Gets Locked in the Vault" (Season 2, Episode 4, Air Date: October 21, 1963) and "Lucy and the Scout Trip" (Season 2, Episode 26, Air Date: March 30, 1964).  In "Lucy Gets Locked in the Vault," Lucy's attempt to give Arnold (Barry) a haircut ends in disaster.

Barry Livingston did not join the cast of My Three Sons until 1963.  He made his first appearance in an episode entitled "My Friend Ernie" (Season 4, Episode 7, Air Date: October 31, 1963).  He played Ernie Thompson, a foster child living with a family down the street from the Douglas clan.  Chip befriends Ernie and in Barry's debut episode, the two boys embark on an adventure to find a treasure chest.

On September 27, 2013, Barry was interviewed by Nancy Harrington for the Archive of American Television.  When asked to describe his character, Ernie, this is how he replied:

"I was sort of the ragamuffin, the kid who was not the rich kid's child.  I was sort of the poverty-stricken one who couldn't afford braces and glasses.  Terrible haircut.  And slowly that became my signature, being the goofy-looking kid next door, and now that's all the rage.  Nerds control the world."

In September of 1965, My Three Sons began its sixth season with a wedding.  The eldest son, Mike Douglas (Tim Considine) married his girlfriend Sally (Meredith MacRae).  The newlyweds moved out of state where Mike began a new job.  With Consadine and MacRae written out of the show, the stage was set for the Douglas family to adopt the orphaned Ernie.  Thus, Ernie Thompson changed his name to Ernie Douglas and Barry Livingston became a permanent member of the cast.

Fortunately for Barry, the end of My Three Sons did not mean the end of his career.  Unlike many child stars, he managed to land roles on the small screen.  He has a fairly long list of television credits since then.  He appeared in episodes of such series as The Sandy Duncan Show (1972), Room 222 (1973), Ironside (1973).  He was the voice of Linus in  the TV movie You're a Good Man, Charlie Brown (1973).


Barry seems busier than ever and has been a constant presence on the small screen.  Viewers have seen Barry transform himself from "the kid next door" child star to a versatile character actor, a husband and a parent.  He married Karen Huntsman, a physiotherapist, in 1983.  They have two children, a son, Spencer Livingston (born 1989) and a daughter, Hailey Marie Livingston (born 1992).  Spencer is a musician and Hailey is an actress and screenwriter.

The Livingston brothers are survivors in a ruthless and fickle business. In 2012,  Barry talked to Fox News Entertainment about the difficulties he faced  during his career.  "I had a lot of challenges to overcome - drug use, the obstacles of re-inventing myself and my credibility " he told reporter Hollie McKay."  "I could barely get an agent, or get to see casting people.  It's a strange town and you never really know why you're hot and the next minute you're not.  I found myself no longer on the list of people called to read roles in TV and film." 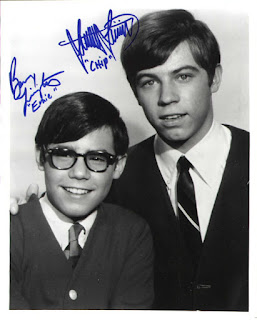 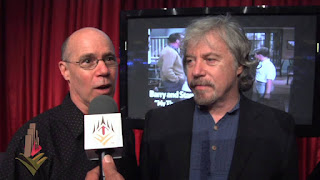 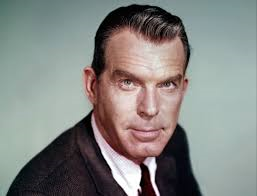 * Barry Livingston's memoir is titled The Importance of Being Ernie: From My Three Sons to Mad Men, a Hollywood Survivor Tells All.  It was published by Citadel in 2011. 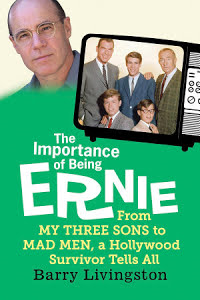