Wow!  What a week on Y&R!  The show pulled out all the stops as it celebrated its 45th anniversary.  For longtime viewers, it was a treat to see Lorie and Leslie Brooks again (Jaime Lyn Bauer and Janice Lynde).  However, it's too the Brooks sisters weren't shown at the Walnut Grove high school reunion.  It was also fun to see Mackenzie and Raul and Brittany after all these years.  It even turned out that Raul and Brittany are a married couple.

To be honest, I never expected J.T. Hellstom to be such a louse.  He's never been an angel, but now he's really become wicked.  He left Victor.to die on the stairs and went home to Princess Victoria.  The Black Knight would have perished if Jack Abbott hadn't arrived on the scene and called 911.  Unfortunately for Jack, he was drunk and angry when he found Victor.  The cowardly J.T. took off, leaving Jack to face the music.

Emotional abuse, not physical abuse, seems to be the main issue that The Young and the Restless is highlighting, although the two often go together.  Mac never accused J.T. of physically harming her.  She warned Victoria of J.T.'s history of emotional abuse.  She talked about how he belittled her with constant criticism and how he made her lose her confidence.  Victoria knows that J.T. has been doing the same thing to her.  She's been in some kind of denial or dream world.  It's hard to believe that she accepted J.T.'s proposal after what he's said and done to her.  However, Sharon finally woke up the sleeping princess when she advised her to see a relationship counsellor.  After that, Victoria informed J.T. that she couldn't marry him.  We will soon see how the scoundrel reacts to that.

Victor will definitely survive J.T.'s attack.  I have no doubt of that.  As far as I know, there has been no mention of Eric Braeden retiring. I am also certain that Victor will win again, as usual.  He may not remember everything at first.  However, J.T. villainy will e exposed and Victor will save his Princess Victoria.

J.T. obviously has an agenda.  He persuaded Mac to sign the divorce papers quickly.  Of course, the reason wasn't that he loves Victoria so much that he couldn't wait another day to marry her.  For one thing, he's afraid that Victor will identify him, expose his crime and prevent him from tying the knot with Victoria.  However, his plan to marry Victoria seems to have been thwarted by Sharon.  This is far from over, though, and Victor may end up preventing the marriage after all.

Once again Clueless Genoa City Police Chief Paul Williams has arrested the wrong person.  I know there was circumstantial evidence against Jack, but did Clueless have to make a scene at the high school reunion.  He just loves the drama of arresting someone, handcuffing them and reading them their rights.  The only problem is that he always targets an innocent person.  He's just not doing his job.  That's why other residents of Genoa City, such as Phyllis and Victor,  have been conducting their own investigations.

As if Jack doesn't have enough chaos in his life already, he will soon discover that John Abbott is not his biological father.  I'm not to keen on that storyline.  I know its being done for storyline purposes, so that we can solve the mystery of Jack's biological father.  Isn't it enough that Ashley is not John's biological daughter?  What next?  Will Traci turn out not to be a blood Abbott too.  At least we know for sure that Billy is John's son with Jill, don't we.  Maybe Jill been hiding something too.  (Just kidding, but the way things have been going, you never know).

It looks as if Abby is going to get involved with Arturo eventually.  He really caught her eye when he passed by.  The look on her face said it all, didn't it?  Now that Nikki is at Victor's bedside, Arturo may turn to Abby.

Nick and Sharon locked lips but delayed any reconciliation.  That was probably a wise choice on Nick's part.  I think that they will eventually reunite, but why rush it?  Nick is just getting over a devastating breakup with Chelsea and Sharon recently ditched two-timing Scott Grainger.  They are wise to take their time.  Looked what happened when Victoria got back together with J.T. so quickly.

By the way, there has been no news about Chelsea and Connor.  It seems she is still on the loose.  I guess the writer will deal with their fate in due time.  There is so much else going on in Genoa City right now.

Fans, what is your impression of Michael Mealor, the new Kyle?  I think he's a stronger actor than the actors who have played the role before.  However, he doesn't seem to be portraying Kyle as a very likeable or sympathetic character.  He's given Kyle an edge that Kyle never really had before.  His Kyle has been very bitter and angry since his return.  He seems so dark and mean-spirited.

Regular Y&R viewer, Fifi from Collingwood was disappointed by the Walnut Grove reunion.  She wanted to see Lorie and Leslie there and she hoped that someone would entertain the guests.  She would have liked to have seen someone like Gina Roma (Patty Weaver) sing a song at the event.

Well Fifi, I agree with you.  I would have liked to have heard a song too.  Too bad they didn't also have Gina's brother, Danny Romalotti (Michael Damian).  He's a recording artist and he could have performed too.  I guess they weren't available.

However, Lauren Woodland (Brittany), who is a singer, was in attendance.  She mentioned something about a song.  I thought she was going to perform, but she didn't.

Where has Ravi (Abhi Sinha) been? 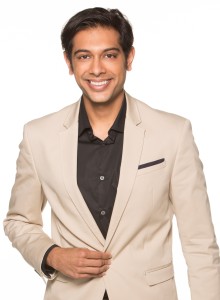 If you are wondering what happened to Ravi Shapur (Abhi Sinha), here's your answer. His fans will be pleased to know that he he will be returning to his role on The Young and the Restless after a brief hiatus.  The Indian-American actor took some time out to participate in pilot season auditions. Obviously has his eye on a primetime TV role.  However, it does not appear that he landed a part on a primetime series.  Abhi tweeted the following. "I'm so glad to be back doing what I love and prouder to be part of a show that has been around for forty-five years and broken barriers with Ravi and an Indian-American character.  Not only has there been a tremendous evolution of charcter, but to pair him with an older, white, established star (Eileen Davidson as Ashley Abbott) was revolutionary and progressive."

So, what's next for Ravi now that his relationship with Ashley has fizzled out?  I've been trying to think of some eligible Genoa City women to pair him with.  I've considered Abby, but that might be awkward, since she's Ashley's daughter.  Also, I think she's going to become involved with Arturo.  Since Ravi seems to prefer older women, how about Phyllis?  She would have to break up with Billy, though.  Phyllis and Billy Boy seem happy right now, but happy couples don't last too long on soaps.
Perhaps Ravi and Summer would be good match, if she ever returns from her extended vacation.  What do you think, fans?  Respond to the poll below and let me know what you think.


Who would make a good match with Ravi?
Created with PollMaker

That's all for now.  Please remember that the next edition of Y&R Report will appear in this
space on Saturday, April 14, 2018.

HAPPY EASTER AND HAPPY PASSOVER TO ALL WHO CELEBRATE.