Whatever happened to Whitey (Stanley Fafara) of Leave it to Beaver? 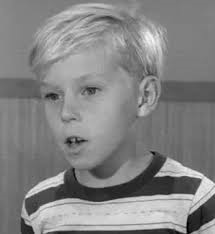 "Drugs, money women.  I got all of them because I was Whitey."

Do you remember that little blond boy on Leave it to Beaver?  His name was Hubert "Whitey" Whitney and he was a school friend of Beaver Cleaver.  Whitey was portrayed by the late Stanley Fafara, who died in 2003 under unfortunate circumstances.  Sadly, Stanley's story is another one of those tragic tales surrounding the lives of child actors.

Stanley Albert Fafara was born in San Francisco, California on September 20, 1949.  His older brother, Lucas "Luke" Fafara II  (known as Tiger Fafara), also appeared on Leave it to Beaver.  He played the bespectacled Tooey Brown, one of Wally Cleaver's  friends in the series.  Both siblings were raised in Studio City, Los Angeles and their mother pushed them into acting at an early age.

In 1957, Stanley's mother brought her sons to an open casting call for a new family sitcom called Leave it to Beaver. Seven-year-old Stanley won the role of Whitey Whitney, one of Beaver's best buddies, while his brother Tiger was cast as Tooey.  Tiger played Tooey in 18 episodes of Leave it to Beaver, from 1957 to 1960.  Stanley, on the other hand, remained for the show's entire six-year run, appearing in 57 episodes.

When the series ended in 1963, Stanley attended North Hollywood High School.  He associated with the pop group Paul Revere and the Raiders and reportedly lived with the band for a while. He also began drinking heavily and using drugs.  At his parents' urging, he moved in with his sister in Jamaica.  He tried to become an artist, but was was unable to stop drinking and using narcotics.

At the age of 22, Stanley returned to Los Angeles where he was married to Rosemary Oswald for a short time.  They divorced after having one child and Stanley hit rock bottom.  He supported himself by dealing drugs and by  the early 1980s, he had begun to burglarize pharmacies  in order to maintain his drug habit.  After his seventh robbery, he was arrested and bailed out by his parents.  However, when he was caught breaking into a pharmacy for the eighth time, he was convicted and sentenced to a year in jail.

After his release from prison, Stanley moved to Portland Oregon with a girlfriend and tried several means of employment.  He supported himself by working as a waiter, a roofer and a janitor but eventually returned to dealing narcotics.  He later became addicted to heroin and was in and out of rehabilitation for many years.

Tom Hallman Jr,, a Pulitzer Prize-winning reporter for the Portland Oregonian kept in touch with the former child star. Hallman wrote a profile on Stanley Fafara and described him as short and stocky with slicked-back grey hair and a weathered face.  He stated hat Stanley had been clean and sober since entering a Portland detox centre in 1995 and living at a clean-and-sober house for alcoholics and addicts.

According to Stanley's IMDb biography, he managed to turn his life around and eventually re-established a relationship with the daughter he hadn't seen in two decades.  He helped other addicts and even launched a business designing websites, with some measure of success.

Regrettably, however, Stanley Fafara had already contracted Hepatitis C.  On September 20, 2003, he died of complications from a surgery performed in late August to repair a constricted intestine caused by a hernia.  Stanley passed away in a Portland, Oregon hospital at the age of 54.  According to his obituary by Dennis McLellan of the Los Angeles Times, Stanley "had been living in a single-room occupancy building in Portland's skid row, paying $153 a month for his 12-by-12 room out of his Social Security disability check of $475 a month."  He couldn't work without forfeiting his disability income.


Stanley Fafara is interred at the Redland Pioneer Cemetery in Redland, Oregon.  The parishioners of St. Elizabeth of Hungary Catholic Church in Portland raised the funds for Stanley's burial.  However, since there was no money for a headstone, the grave remained unmarked for 13 years.  On June 14, 2016, Father Jim Kolb, who had officiated at Stanley's funeral, also officiated at the blessing of his gravestone.

Stanley is survived by a daughter and a grandchild.  He also left a nephew, Dez Fafara of the rock band Coal Chamber, with who he had become close during his recovery.  Dez is the son of Stanley's brother, Tiger.

Stanley's older brother, Lucas "Luke" Fafara, also known as Tiger Fafara, appeared on Leave it to Beaver as Tooey Brown.  Tiger was born January 3, 1945, and is now 73 year old.  After leaving Leave it to Beaver in 1960, Tiger stopped acting professionally.  He returned to acting in 1983 when he reprised his role as Tooey in the TV reunion film Still the Beaver.  He also portrayed Tooey in the follow-up sitcom The New Leave it to Beaver, which aired from 1983 to 1987.