Sharon "Kristin" Harmon was born on June 25, 1945 to football star Tom Harmon and his wife, actress Elyse Knox.  Kristin was the older sister of actress/ model Kelly Harmon and actor Mark Harmon.  She was an actress, artist and author.  In 1963, Kris married singer/actor Rick Nelson, They divorced in 1982 and Rick died in a plane crash on New Year's Eve 1985.  Below is a 1964 publicity photo of Kris and Rick when they appeared in The Adventure of Ozzie and Harriet. 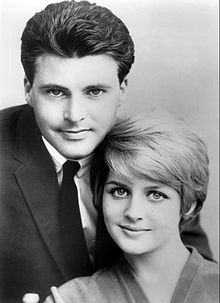 Kris and Rick had four children:  daughter Tracy, and sons Matthew and Gunnar, and Sam.

Kris was 72 years of age at the time of her death.  I posted an article about Kristin Harmon Nelson's life back in 2011.  If you would like to read it, click on the link below.


EDITOR'S UPDATE (April 29, 2018):  As of this writing, Kristin's death has not been reported on Wikipedia..  Back on February 28, 2017, RadarOnline.com reported that Kris had recently been in the intensive care unit of Christus St. Vincent Regional Medical Center in Santa Fe, where she's lived and worked as an artist.  According to the website, she was "stricken with pneumonia, which turned into the potentially lethal staph infection MRSA.

Here is what daughter Tracy wrote on her Facebook page on May 1.

"I want to talk about my Mom, who passed on Friday (April 27, 2018) of a heart attack in the night.  Just thoughts straight from my brain and I apologize for any babbliness this morning before coffee and a hard night of dreaming.
A force.  A reckoning.  Artist first, always.  Anarchist, bohemian.  Hurricane Kris.  No one could blow the house down like she could.  And no one could make something out of nothing like she could.
Sharon Kristin Harmon who as a wee and gorgeous blue eyed child had fiercely decided she was NOT to be Sharon.- call me Kristen, or nothing at all, thank you very much, the end."