My, my, my!  What have they done to the unfortunate J.T.'s body?  Four women - Nikki, Victoria, Sharon and Phyllis - have buried him.in Chancellor Park.  Although J.T. behaved deplorably and Nikki did not intend to kill him, this female quartet is in a heap of trouble.  Of course, J.T.'s life never should have come to such a horrible conclusion.  It's a grave situation (forgive the silly pun).  Will Jeffrey Todd Hellstrom ever rest in peace?

Actually, I wasn't the least bit surprised that the writers killed off J.T.  I didn't think that Thad Luckinbill's return to the show would be a lengthy one because of his career as a movie producer.  Here's what I don't quite understand about the way J.T. died.  Why did the writers reveal that J.T. was getting treatment from a cardiologist for a heart problem caused by an electrocution he suffered years ago?  What was the purpose of that?  What relevance did it have to the storyline?  Did the writers originally intend to have him die from a heart attack and then change their minds.  Whatever the reason, that was sloppy writing unless it ties in with something we will come to light in the future, after his body undergoes and autopsy.  Perhaps we'll learn that the fireplace poker wasn't the real cause of death.  Maybe he actually did have a fatal heart attack and collapsed at the same time Nikki hit him.

Is Phyllis delusional?  Does she really think the "girl's night" dirty little secret won't be uncovered (another silly pun)?  Too many people want to find J.T.  Nick and Victor are both fiercely determined to locate him.  Clueless Genoa City Police Chief Paul Williams is also seeking the dead man, but as usual, he won't be the one to discover the truth.  Then, there's Sharon. She's a bundle of nerves and she's just about ready to burst at the seams.  How long before she talks?  How are Phyllis and the others going to prevent her from letting the cat out of the bag?  Someone is going to crack under the pressure.  If it's not Sharon, my money's on Princess Victoria.  The Princess is deeply guilt-ridden and anxious.

Victor Newman is in a weakened state right now and he has difficulty speaking.  Nevertheless, he was alert enough to recognize that something is going on between Nikki and Arturo.  That means Arturo is not in a good position right now.  He is caught between two women - Nikki and Abby.  Now Victor will be keeping an eye on him.  He has already warned Nikki that if Arturo isn't fired from the housing project, there will be trouble.  We all know how jealous and possessive "The Black Knight" can be, especially where Nikki is concerned.  Arturo is going to have to watch his step.

It was good to see Neil Winters (Kristoff St. John) back in Genoa City.  Kristoff St. John went through an extremely difficult time and Y&R viewers really gave him a lot of support.  He thanked thanked fans for being an "inspiration" during his ordeal.

As for Kristoff's character, Neil, I'm glad that he's setting some boundaries for Devon.  I think Devon became a little too big for his britches during Neil's absence.  He's had too much power for too long.  It's gone to his head. He needs to be taken down a notch.  There's obviously much more attraction between Devon and Hilary than Devon and Simone.  It'a just that things can't go too smoothly between the two.  Simone is around to create conflict in their relationship.

Jack Abbott has fired Helen Wallace as Jabot's chief chemist due to her relationship with Victor.  So, who is creating and testing new products for the company?  I think Ashley will be in the lab again eventually.  As for Jack, he's going to be absolutely devastated when he discovers he's not John Abbott's biological son.  So much of his identity involves being an Abbott.  It's a shame having the Abbott blood means so much to him and that he can't be satisfied that John Abbott regarded him as his son in every way.

The mystery of Jack's biological father is intriguing and I'm certain Y&R will keep viewers guessing for a long time.  I have heard some suggestions that Victor may be the one and that his recent "date night" and dance with Dina was a foreshadowing.  The writers may have that in mind because Jack and Victor have been lifelong enemies.  I hope that it doesn't turn out that way. I don't want Victor and Jack to be father and son.

It looks like it's goodbye to Reed Hellstrom.  The writers decided to get rid of him quickly by sending him off to boarding school in New Hampshire.  He's leaving town without knowing what really happened to his father.  He doesn't know that J.T. is dead and that he'll never see him again.

Tristan Lake Leabu, the actor who plays Reed, is on his way out, even though he has been nominated for a Daytime Emmy in the category of Outstanding Younger Leading Actor in a Drama Series.  The teenage musician sang and played the guitar on Y&R and performed in the opening musical number at last year's Daytime Emmys.

Leabu, 18, joined the cast of The Young and the Restless in January of 2017, so his tenure on the show hasn't been very long.  Head writer Mal Young has made a habit of abruptly writing characters out of storylines.  It wasn't too long ago that  Reed's cousin Noah (Robert Adamson), suddenly decided to take off for India.  Lauren's son, Scott Grainger, also left town after both Sharon and Abby dumped him.  However, some of those characters may return in the future.  So, maybe Reed will come back to Genoa City in a few years.  He'll know what really happened to his father and he'll probably be quite angry with his mother and his grandmother.  Will his personality change as drastically as Kyle's did?

Most soap opera stars don't have a great deal of job security, do they?  They can be written out at the whim of the writers. unless they have clout and a great of viewer support.  Soap veterans and fan favourites such as Eric Braeden 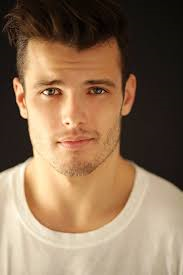 Kyle Abbott, played by Michael Mealor,  is back in Genoa City, but this time he has an edge to him.  He's scheming and ambitious and far more forceful (I guess he underwent a personality transplant in New York or maybe a surgeon inserted a chip on his shoulder).  If he still has anything left of his softer side, we haven't seen it yet.  Having said all that, I really think Michael Mealor is by far the best actor who has played the role of Kyle.  What do you think, fans?  Do you have a positive or negative impression of Jack's prodigal son?  Let me know by responding to the poll below.

That's all for now.  The Daytime Emmy Awards will take place tomorrow, Sunday, April 29.  You can watch the event online.  Also, get ready for the May Sweeps.  There should be lots of excitement on Y&R.

Please remember that the next edition of Y&R Report will appear in this space on Saturday, May 12, 2018.