The real names of 30 television stars #2

1,  JASON ALEXANDER (Seinfeld) was born Jay Scott Greenspan on September 23, 1959 in Newark, New Jersey, USA.  He is the son of Alexander B. Greenspan, whose first name he used to create his stage name.


2.  ED ASNER (The Mary Tyler Moore Show, Lou Grant) was born Yitzhak Edward Asner on November 15, 1929 in Kansas City Missouri.  Ed's  parents immigrated from Russia and he was raised in an Orthodox Jewish family.  Ed was president of the American Screen Actor's Guild from 1981 to 1985.

6.  JAMES BROLIN (Marcus Welby, M.D, Hotel, Life in Pieces) was born Craig Kenneth Bruderlin on July 18, 1940  in Los Angeles California.  He has been married to Barbra Streisand since July 1, 1998 and is the father of actor Josh Brolin.

8.  DONNA DOUGLAS  {The Beverly Hillbillies) was born Doris Ione Smith on September 26, 1932 in Pride, Eat Baton Rouge Parish, Louisiana, USA.  She played the role of Elly May Clamppett on The Beverly Hillbillies from from 1962 to 1971.  Donna died of pancreatic cancer on January 1, 2015.  She was 82 years old.

11.  WILL FERRELL (Saturday Night Live) was born John William Ferrell on July 16, 1967 in Irvine, California, USA.  In the 1990s, he established himself as a comic actor when he became a member of the cast of the sketch comedy show Saturday Night Live.

17.  DAVID JANSSEN (The Fugitive) was born David Harold Meyer on March 27, 1931 in Naponee, Nebraska, USA. His parents divorced in 1935 and his mother later married Eugene Janssen,  David used his stepfather's surname when he entered show business.  On February 13, 1980, David Janssen died after suffering a heart attack.  He was 48 years old at the time of his passing.

18.  TOM JONES (This is Tom Jones) was born Thomas John Woodward in Glamorgan. South Wales on June 7. 1940.  In the 1960s, his manager, Gordon Mills, gave him the stage name "Tom Jones" after a popular Oscar-winning 1963 film of the same name.  From 1969 to 1971, the Welsh singer hosted a variety TV series entitled This is Tom Jones.  The show featured guest stars such as Ella Fitzgerald, Cher, Dusty Springfield, Stevie Wonder, Peter Sellers Mary Hopkin, Bob Hope, Liza Minnelli, Janis Joplin and The 5th Dimension.


19.  TED KNIGHT (The Mary Tyler Moore Show, Too Close for Comfort) was born Tade.  usz Wwladyslaw Konopka on December 7, 1923.  He was born to Polish-American parents in Terryville, Connecticut.  Ted died of colorectal cancer on August 26, 1986.  He was 62 years old.

20.  DON KNOTTS (The Andy Griffith Show, Three's Company) was born Jesse Donald Knotts was born July 21, 1924 in Morgantown, West Virginia, USA.  He passed away on February 24, 2006 at the age of 81, due to complications from lung cancer.

21.  JAY LENO (The Jay Leno Show, The Tonight Show with Jay Leno) was born James Douglas Muir Leno on April 28, 1950 in New Rochelle, New York.  His mother, Catherine, was Scottish-born and her maiden name was "Muir"  His father, Angelo, was the son of Italian immigrants.

22.  ROY ROGERS (The Roy Rogers Show) was born Leonard Franklin Slye in Cincinnati, Ohio on November 5, 1911.  He was known as the "King of the Cowboys."  The popular Western star appeared in over 100 movies and in many radio and television episodes of The Roy Rogers Show, often with his wife, Dale Evans.  He acquired the stage name "Roy Rogers" during his film career in the late 1930s.  When  Gene Autry, the original "Singing Cowboy,"  demanded more money for his work, there was a competition for a new "Singing Cowboy."  Leonard Slye won the competition and Republic Pictures changed his name to Roy Rogers, using the surname of cowboy humourist Will Rogers.  Roy Rogers died on July 6, 1998 at the age of 86. 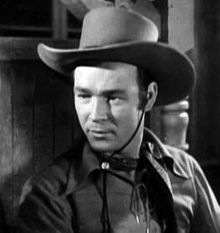 23.  ISABEL SANFORD (All in the Family, The Jeffersons) was born Eloise Gwendolyn Sanford on August 29, 1917 in New York City.  When she played the role of the maid Tillie Binks in the 1967 film Guess Who's Coming to Dinner, she was credited as "Isabell Sanford."  Norman Lear noticed her and cast her as Louise Jefferson on All in the Family.  She and her TV husband, Sherman Hemsley (George Jefferson) became so popular that Lear spun the character off into their own weekly series, The Jeffersons.  The Jeffersons ran for 11 seasons.  Isabel died on July 9, 2004 at the age of 86.


24.  MARTIN SHEEN (The West Wing) was born Ramón Gerard Antonio Estévez in Dayton, Ohio, USA.  He is the son of a Spanish-born father and an Irish-born mother.  From 1999 until 2006, Sheen portrayed U,S. President Josiah Bartlett on the TV drama The West Wing.  He adopted the stage name Martin Sheen by combining the names of the CBS casting director, Robert Dale Martin, and the televangelist Catholic archbishop, Fulton J. Sheen.

In a 2003 interview with Actors Studio, Sheen stated, "Whenever I would call for an appointment, and I would give my name, there was always that hesitation and when I'd get there, it was always gone.  So I thought, I got enough problems getting an acting job, so I invented Martin Sheen.  It's still Estévez officially.  I never changed it officially.  I never will.  It's on my driver's license and passport and everything.  I started using Sheen.  I gave it a try, and before I knew it, I started making a living with it and then it was too late.  In fact, one of my great regrets is that I didn't keep my name as it was given to me.  I knew it bothered my dad."

26.  SUZANNE SOMERS (Three's Company, Step by Step) was born Suzanne Marie Mahoney on October 16, 1946 in San Bruno, California.  She is best known for her roles as Chrissy Snow on Three's Company and Carol Foster Lambert on Step by Step.

27.  LILY TOMLIN (Rowan & Martin's Laugh-In, Grace and Frankie) was born Mary Jean Tomlin on September 1, 1939 in Detroit, Michigan.  She is known for her portrayal of Ernestine, the telephone operator, on Laugh-In.  She currently co-stars with Jane Fonda in the Netflix web TV series Grace and Frankie. 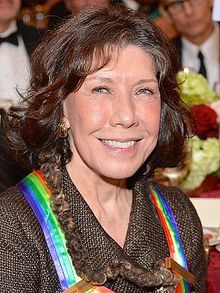 28.  ALEX TREBEK  (Jeopardy!) was born George Alexander Trebek on July 22, 1940 in Sudbury, Ontario, Canada.  His father was a Ukrainian immigrant and his mother was a Franco-Ontarian.  He began his television career in Canada and appeared on the CBC.  He then hosted game shows in the United States.  He has hosted Jeopardy! since 1984.

29.  BURT WARD (Batman) was born Bert John Gervis Jr. on July 6, 1945 in Los Angeles, California.  At 19 years old,, he won the role of Robin the Boy Wonder in the Batman series that aired from 1966 to 1968.  He also adopted the name "Burt Ward."  Feeling that the soft G in "Gervis" was difficult to pronounce, he used his mother's maiden name, which was "Ward."  He also changed the spelling of his first name to "Burt" to add "punch."