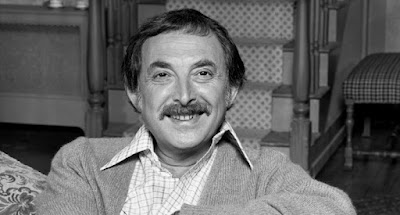 Bill Macy is best known for his role on Maude, a popular sitcom that aired on CBS from 1972 to 1978.  The show was a spin-off of All in the Family with Beatrice Arthur starring as Edith Bunker's outspoken liberal cousin, Maude Findlay.  For six seasons, Bill portrayed Maude's long-suffering fourth husband, Walter Findlay.

After Maude ended, Bea Arthur starred in another hit comedy series, The Golden Girls, along with Betty White and Rue McClanahan. The Golden Girls ran on NBC from 1985 to 1992.  Bea died of lung cancer.on April 25, 2009 at the age of 86.  Bill, however, is still with us at 97.

Bill was born Wolf Martin Garber in Revere, Massachusetts on May 18, 1922, the son of Mollie (née Friedopfer) and Michael Garber, a manufacturer.  Bill was raised in Brooklyn, New York and attended Samuel J. Tilden High School in Brooklyn's East Flashbush district.  He worked as a taxi driver before pursuing an acting career.  That's probably why he portrayed a cab driver in a 1966 episode of the daytime soap, The Edge of Night.

Maude was the perfect foil for Archie Bunker and his conservative views.  She espoused liberal causes.  She was a staunch Democrat and a feminist.  When Bea Arthur's Maude was spun off into a CBS series of her own, Bill found himself on a hit show.  The series was created by All in the Family producers Norman Lear and Bud Yorkin.  In an interview for the Archive of American Television (now called An Oral History of Television), Lear recalled how he first discovered Bill Macy in an off-Broadway play.  He couldn't remember the name of the play, but he has never forgotten how Bill was choking on a chicken bone.

Below is a 1973 photo of Bill Macy and Beatrice Arthur in a scene from Maude. 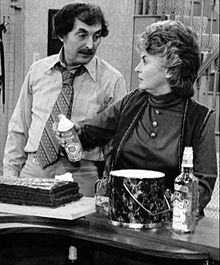 According to a May 1979 article by Marilyn Beck, Bill complained that he was cut off from Bea Arthur and the rest of the cast when Maude ended.  In the article, he is quoted as saying, "For six years - for six solid years - we saw each other more than we saw our real families.  Then the show closed and it was like a guillotine - snap, sever.  That was it!  Now go figure that out.  I haven't spoken to Bea since - and I certainly wouldn't be presumptuous enough to call her because I respect her privacy and she is a private person.  And it's not only Bea.  I haven't seen or spoken to Conrad Bain, Adrienne Barbeau - none of the cast - since the end of Maude.

Bill Macy has been married twice.  His first wife was Judith Janus, but he has been married to actress Samantha Harper since 1975.  Samantha portrayed Sandy in the 1985 film Torchlight and an occupational therapist in the 1977 drama/fantasy film I Never Promised You a Rose Garden..  She appeared as Mrs. L.W. in a 1980 episode of the sitcom Mork and Mindy entitled "Invasion of the  Snatchers" (Season 2, Episode 25, Air Date: March 20, 1980) and as Lois in a 1986 episode of Hill Street Blues entitled "I Come on My Knees) (Season 7, Episode 5, Air Date: November 6, 1986).

Bill and Samantha co-starred in the 1972 film version of the controversial off-Broadway nude comedy revue, Oh! Calcutta!.  Bill was an original cast member of the long-running revue.

* Conrad Bain passed away on January 14, 2013, following a stroke.  He died three weeks before his 90th birthday.


* Adrienne Barbeau (born June 11, 1945) is now 74 years old.  In 2013, Adrienne Barbeau made a guest appearance as Alice Noone on Sons of Anarchy, an FX series.  She appeared in the sixth season of the series in an episode called "Sweet and Vaded."  Adrienne has been divorced twice and is a mother of three.