You wanted to know . . . What happened to Mark Stewart (Toby on Mannix)?


A reader wanted to know what happened to Mark Stewart, the boy who played Toby, Peggy's (Gail Fisher) son on Mannix.

From 1968 to 1975, Mark Stewart portrayed Toby Fair in 12 episodes of Mannix, the CBS detective series starring Mike Connors.  When the series made its debut in 1967, Joe Mannix, a Los Angeles private investigator, worked for a detective agency called Intertect.  In the second season, Mannix opened his own detective agency, assisted by his secretary, Peggy Fair (Gail Fisher).  Peggy was the widow of a police officer who was killed in the line of duty, while trying to prevent a burglary.

Mark first appeared as Toby on Mannix in a 1968 episode entitled "The Need of a Friend" (Season 2. Episode 9, Air Date: November 23, 1968).  In the episode, Joe Mannix tries to help a man released from prison after serving 7 years.  It was Mannix who helped send him to prison when he was on his first case.

In a Mannix episode entitled "Medal for a Hero" (Season 3, Episode 14, Air Date: January 3, 1970), police uncover evidence indicating that Peggy's late husband and other police officers were on the take.  Young Toby is devasted by the news, but Mannix claims the boy as his client in an effort to clear his father's name in this case.

Below is a photo of Mark Stewart in an episode of Mannix entitled "Merry-Go-Round for Murder."  It aired on April 5, 1969. 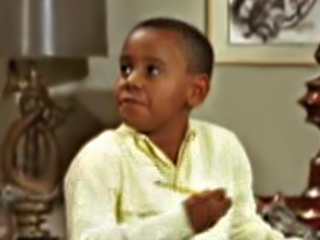 According to IMDb, Mark has no TV or film credits after Mannix.  He seems to have ended his acting career when Mannix went off the air.  There is very little information on him online and "Mark Stewart" is a common name.  Perhaps he wants to remain private.  If that's the case, I respect his privacy.  If not, I wonder if anyone can provide TV Banter with some information about Mark.  Even better, I invite Mark to send me an email to share with for my readers.

* Gail Fisher died on December 2, 2000 in Los Angeles.  She was 65 years old at the time of her passing and the cause of her death was kidney failure.  Gail was one of the first African-American women to have a leading role in an American television series.  The only other one I can think of right away is Diahnn Carroll who starred in Julia.  She played Julia Baker, a widoed nurse with a young son (her husband was a soldier who died in Vietnam).  Julia was a comedy and it ran from 1968 to 1971, at the same time Gail Fisher appeared in Mannix.

* Mike Connors passed away on January 26, 2017 at the age of 91.
- Joanne
EDITOR'S UPDATE:  I was given information that child actor Mark Stewart became singer-songwriter "Stew."  I wrote a follow-up article.  To view the article click on the link below.
http://www.tvbanter.net/2022/02/mark-stewart-of-mannix-and-singer.html
Posted by Joanne at 10:05 PM