I've wanted to post this blog piece for quite a while now.  I believe I know what happened to Mark Stewart, the actor who played Toby Fair on Mannix, a crime-detective show starring Mike Connors. Mannix ran from 1967 to 1975 on CBS.  Mark appeared in 12 episodes of the series from 1968 to 1975.  He portrayed d the young son of Mannix's widowed assistant, Peggy Fair, played by the late Gail Fisher (1935-2000).  In addition to his role on Mannix, Mark Stewart only appeared on one other television series, a 1970 episode of Bracken's World.

For almost two years, I've been hesitant about  revealing what seems to have happened to Mark Stewat of Mannix, and  for a valid reason.  I hesitated because I was concerned about the privacy of the person involved.  It seemed that for some reason, he didn't want this information made public knowledge.  I can't fathom why anyone would want to hide a past which includes being a child actor on a popular TV series.

Here's some background.  On March 18, 2020, I wrote a piece about whatever happened to Mark Stewart, the little boy on Mannix.  I reached a dead end.  In the course of my research, I noticed that that there was no information about him as an adult.  It was as if he had disappeared from the face of the earth.  According to IMDb, Mark had no TV or film credits after Mannix.  He seemed to have ended his acting career when Mannix went off the air in 1975.

My blog piece sparked a great deal of interest and many comments and questions.. Some readers were really curious about what had become of Mark Stewart.  I received a couple of emails informing me that he had become a popular musical artist.  As recently as February 4, 2022, I received the following comment on my March 18, 2020 article: "I believe he (Mark Stewart) became a singer and songwriter and was pretty successful.  He won Tony Awards."  I did not post this comment on my blog piece for obvious reasons.

In Stew's Wikipedia entry, he is listed as a Tony Award winner and nominee for Passing Strange, a semi-autobiographical rock musical for which he wrote the book, lyrics and music (with Heidi Rodewald).

The entry on Stew, the musician, reads as follows.  "Mark Stewart (born August 16, 1961 known by his stage name Stew, is an American singer-songwriter from Los Angeles, California, United States."  That would make Stew about seven or eight years old when he began appearing on Mannix in 1968, which corresponds to the age of the Toby Fair character on Mannix.  By calling himself "Stew," Mark distinguished himself from an English musician, of the same name (The British Mark Stewart was born in 1960 and was a founding member of The Pop Group).  In the early 1990s, Stew, the American musician, founded a four-piece band called The Negro Problem.  He later embarked on a solo career.

I attempted to contact Stew.  I sent messages to him on Twitter and on his Facebook page.  I left my email address and requested that he get in touch with me.  I really wanted to ask him to confirm that he had a role on Mannix as a child actor.  I also wanted to find out if he strongly objected to my revealing his past on the popular TV series.  Unfortunately I did not receive a response.  If I am wrong that Stew was a child star on Mannix, I sincerely apologize to him.
Here is a 1970 photo of Mark Stewart with his TV mother, Gail Fisher, during their Mannix days. 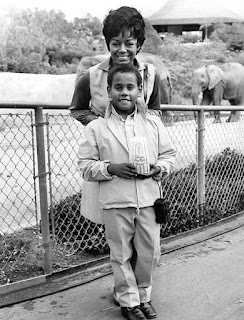