Family Feud is one of my favourite game shows, my all-time favourite being Jeopardy!.  So, I am delighted that the Feud is coming to Canada this fall, and I'm not talking about the Steve Harvey version.  The popular TV game show will soon be airing on the CBC.  Family Feud Canada will be hosted by comedian Gerry Dee,, who starred in the CBC's Mr. D.  Auditions are being held in 16 cities across the country. According to Molly Middleton, the show's senior producer.  "We come to all these cities and see people in person and do kind of like a mock game play and put people through a test," Middleton stated in an article on the CBC's website.

Would-be contestants can not just line up for an audition.  The CBC is searching for lively and energetic people and families of five are requested to apply online by submitting 3-to-5 minute videos.  If the producers are impressed, they will invite you to meet them in person.  The contestants will not be limited to those who live in Canada's most populous cites.

,Although families selected after the in-person auditions will go to Toronto for a taping, Middlleton stressed ithat "we don't want people in the farthest reaches to feel excluded."  That's why all travel expenses will be covered for the five-person families.  That's why there will be in-person interviews, for example, in Yellowknife, Northwest Territories on September 7, 2019. 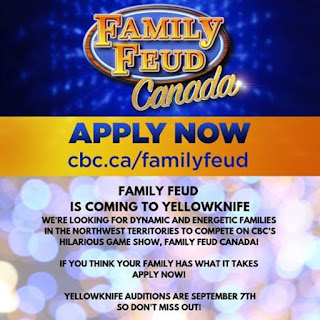 "Families" do not have to be blood-related.  Participants must be 18 years of age or older as of September 1, 2019.  Those directly related to a CBC employee are not eligible to be a contestant on the show.

* Family Feud was created by Mark Goodson.(1915-1992, a U.S. television producer who specialized in game shoes.  Two families compete to name the most popular responses to survey questions in order to win cash and prizes.