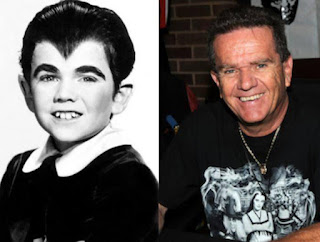 "I've been trying to hit home runs all my life.  Now I'm going to hit a few singles and doubles."

Eddie Munster was quite a kid.  Portrayed by child actor Butch Patrick, Eddie was a pointy-eared werewolf boy on the 1960s TV  sitcom, The Munsters.  Eddie even had a pet dragon named Spot.  "They put makeup on me, and that was the character," Butch told People magazine in 1989.  He made 35 shows a season for two years, an average of $600 a show.  "I was like the mascot of Universal Studios.  I used the back lot as my private little entertainment center."

When The Munsters ended, Butch continued working, guest-starring on series such as Adam-12 and The Monkees.  Still, he never again attained the success and recognition that his stint on The Munsters brought him.

Butch Patrick was born Patrick Alan Lilley in Inglewood, California on August 2, 1953.  Butch's parents divorced soon after his birth and his mother, Patty, raised him as a single mother. When Butch was about 7 years old, he accompanied his little sister to a photo shoot with Hollywood photographer
Amos Carr. They were introduced to talent agent Mary Grady (mother of Don Grady of My Three Sons and Lani O'Grady of Eight is Enough), who was planning to open a child agency  Photos were taken of both children and placed in Carr's Hollywood Blvd. studio.

The photos of Butch were noticed by someone (most likely a producer), who contacted Grady.  She submitted Butch's name for interviews for movie parts, guest spots on television and roles in TV commercials.  His third interview was for a Kellogg's Cornflakes commercial in which he played a little child who couldn't quite read the back of the cereal box.  According to IMDb, Patty and Butch's agent, Mary Grady, created Butch's stage name by combining his nickname, "Butch", with his real first name.

In 1962, when Butch was eight, Patty married major league baseball player Ken Hunt of the Los Angles Angels,  Ken adopted the child actor, who had already established himself as a child actor in movies and on television.

Ken Hunt had shoulder problems throughout the 1963 major league baseball season and the Los Angles Angeles sold his rights to the Washington Senators.  He and Patty and Butch relocated to Washington, D.C.  However, when Butch won a major role on The Munsters, they had to fly the 11-year-old to Los Angeles every week.  Ken decided not to play baseball in 1965 and returned to Los Angeles.

Although, Butch was a successful child actor, it was his role in The Munsters that really brought him fame.  The Munsters aired on CBS from 1964 until 1966 and featured a family of benign monsters.  The series was produced by Bob Mosher and Joe Connelly, the creators of Leave it to Beaver.  It starred Fred Gwynne as the Frankenstein-like Herman Munster, Yvonne De Carlo as his vampire wife, Lily, Al Lewis as Lily's father, a vampire grandpa, Beverly Owen as Marilyn, Herman and Lily's beautiful teenage niece (later replaced by Pat Priest), and Butch Patrick as their werewolf son, Edward "Eddie" Wolfgang Munster.  Eddie had a werewolf doll named Wolf Wolf.


Butcch portrayed Eddie Munster in every episode of the original series except for the pilot.  In the pilot episode, Happy Derman played Eddie.

Below is a 1964 publicity photo of the cast of The Munsters.  Seated from left are Butch Patrick (Eddie), Yvonne De Carlo (Lily), Fred Gwynne (Herman).  Standing: Beverly Owen (Marilyn) and Al Lewis (Grandpa). 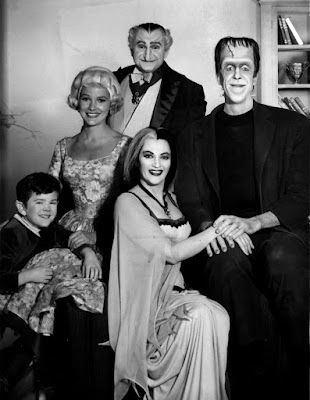 From 1971 until 1972, Butch Patrick starred in the Saturday morning children's series, Lidsville, opposite veteran character actor Charles Nelson Reilly.  Butch portrayed Mark, a teenage boy lost in a peculiar psychedelic land of walking, talking, musical hats.  The fantasy series, which aired on the ABC network, combined conventional actors along with performers in full mascot costumes.  Below is a photo of  the teenage Butch promoting the September 11, 1971 premiere of Lidsville. 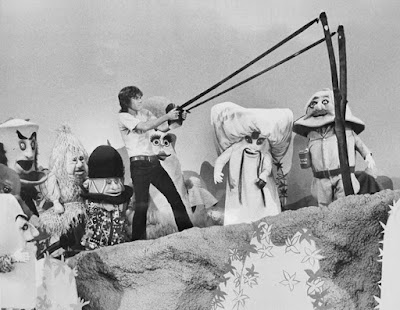 Butch was embarrassed about appearing on Lidsville, but he was attracted to the money he was offered, eventually amounting to $30,000 for 10 days' work.  "I wasn't thrilled by the work," he admitted to People magazine,"but then I decided that most of my friends wouldn't be up on a Saturday morning to see me."  Butch spent his Lidsville money on cars, drugs and more drugs.  He made his first drug purchase at the age of 16.

At 16, Butch also "became disenchanted" with the entertainment business. He went to Brazil to make a film called The Sandpit General which he thought would make him a major movie star, but the film was never released.  He told LA Beat that "the problem was, I went to Btazil when I was sixteen.  I didn't have a teacher or a parent . . . my sister says - I left as Richie Cunningham and came back three months later as John Lennon."

In the 1970s, Butch Patrick appeared in episodes of such TV series as The Smith Family (1971, 1972), Lucas Tanner (1974) and Ironside (1974).  In 1975, Butch took a break from acting to work with Ken, who owned a card club in Gardena, California.  He later performed odd jobs such as waxing cars and selling Christmas trees.

During those years and for many years after, Butch lead the kind of troubled life not uncommon to former child stars.  He had a run-ins with law and became a drug addict.  In 1973, he was charged with carrying a switchblade knife, in 1979 for possessing or selling a controlled substance and in 1981 for gambling.  All three incidents occurred in California.

In November of 1990, Butch was charged with robbing the driver of a limousine in Illinois.  He pleaded not guilty to the charges in December of 1990.  However, in August of 1991, he was found guilty of aggravated battery but acquitted of robbery. He was placed on 30 months probation, fined and sentenced to community service.  He was also ordered to complete a drug and alcohol program.

In July of 2010, Butch announced his engagement to former Philadelphia Eagles cheerleader Donna McCall, a longtime fan of The Munsters.   In early November of that year, the couple broke up.  Soon after, Butch checked into rehab centre in New Jersey for treatment after 40-year addiction to drugs and alcohol.  He checked himself out of the facility but nearly overdosed days later.  He then entered a rehab facility in Orange County, California.

In September of 2016, Butch Patrick married Leila Murray in Macon, Missouri.  The couple exchanged vows at the historic Macon Roundhouse before about 90 guests.  Leila told People magazine that she first met Butch at an event through their mutual friend, automobile designer George Barris.  The pair reconnected in 2016 while Butch was on tour in Florida with his Munster Koach and Dragula Tribute Cars.


Buch has been sober for a while now and is very busy travelling and touring, especially at Halloween.  "The Halloween industry," he told Parade, "over the past 40 or 50 years has turned into a six-week window of trick-or-treating and haunted attractions."  Butch is happy to spend much of that time on the road.  It seems he has beaten his demons by embracing his past, not by running away from it.

* In 1963, Butch Patrick played a boy named Johnny Mercer during the first season of the daytime soap opera General Hospital.

* Butch's stepfather, the late Ken Hunt, was a professional baseball player from 1959 until 1964.  Ken, a boyhood friend of Roger Maris, played outfield in six major league seasons for three teams - the New York Yankees, the Los Angeles Angels and the Washington Senators.  In April of 1966, he was traded to the Chicago Cubs and  assigned to their minor league team in Tacoma, Washington.  He did not play well in Tacoma and decided to retire.

When his baseball career ended, Ken found work in the aerospace industry.  He and Patty divorced, but he remained in closed contact with Butch.  On October 18, 1969, Ken married Sherry Konklin, a woman he met while working at an aerospace plant.  They had three children, a daughter, Kerry Lynn and two sons, Steve and Chris.  Ken Hunt died of a heart attack on June 8, 1997 at the age of 62.


Ken was a member of the Actor's Guild and appeared in a 1965 baseball-themed episode of The Munsters entitled "Herman the Rookie" (Season 1, Episode 29, Air Date: (April 8, 1965).  He portrayed a baseball catcher who was afraid of Herman Munster.  It is interesting to note that baseball legend Leo Durocher appeared as himself in the episode.

* Butch has a diamond-studded ring with the initials "PL" on it, signifying  his real name, Patrick Lilley.  It was given to him when he had a kidney removed.

* Butch learned to play bass guitar.  In 1983, he formed a formed a pop-rock band called Eddie & The Monsters.  The band had a single titled "Whatever Happened to Eddie?," set to the tune of  The Munsters theme."  The group also recorded a song entitled "Little Monsters." 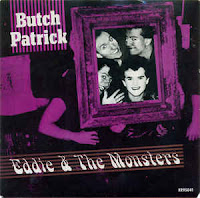 * In May of 2011, Butch revealed that he had been diagnosed with prostate cancer.  He stated that he had caught the disease early and was optimistic about his prognosis.